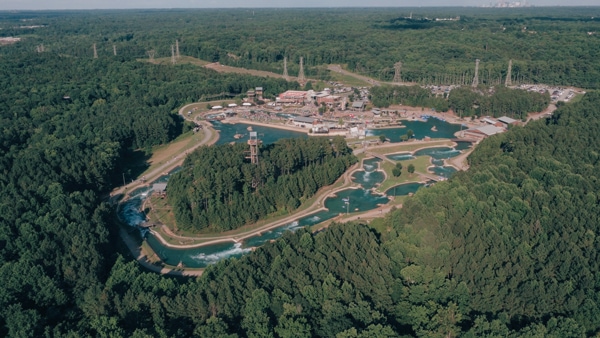 The city of Charlotte is poised to put a $300 million wastewater facility within a half mile of the U.S. National Whitewater Center, which drew 1.3 million visits for rafting, biking, hiking, rock climbing and other activities last year.

Construction of the center in northwest Mecklenburg County is slated to start next year with completion in 2024. Consumers living in the Gaston County cities of Belmont and Mount Holly will make up 20% to 25% of the plant’s capacity during its first decade, with those communities paying “an appropriate cost share” for the project, according to a Charlotte Water statement.

The plan is drawing fire from Whitewater Center CEO Jeff Wise, who came up with the idea for the site that features a recirculating artificial whitewater river. He has run the nonprofit since its opening in 2006. Since then, the 1,300-acre site has become the state’ third-most popular tourist destination, he says, with a particular attraction for Charlotte’s soaring population of millennial and Generation Z residents.

“We avoid stirring things up. We don’t want to be the stirrer. But we are stirring here,” Wise says. “We want the public to understand that they are going to lose a big chunk of what they are appreciating when they come out here.”

The Whitewater Center objects to plans for two new roads and bridges that are planned to access the proposed treatment center, rather than other less obtrusive options. The expansion will “cause a significant loss of trail” and greatly increase industrial traffic on Whitewater Center Parkway, the $6 million, 1.5-mile road financed by the center, Wise says.

In its statement, Charlotte Water said “the preferred access road alignments have been determined.”  It said that 2.5 miles of the Whitewater Center’s 50 miles of trail extend into city land under a use agreement with the agency, which used to be called the Charlotte-Mecklenburg Utilities Department.

Charlotte Water started mulling a regional center in 2005-06 for west Mecklenburg, which has some of the fast-growing county’s last large undeveloped tracts. The area bordering the Catawba River north of the Whitewater Center now includes public elementary and middle schools that opened in 2008-09 and, farther north, a textile chemical complex owned since the mid-1980s by Clariant, a Swiss-owned chemical company. The site, previously owned by a Martin-Marietta division called Sodyeco, was named one of the Southeast’s most hazardous sites by the U.S. Environmental Protection Agency in 1982. Clariant has spent tens of millions of dollars on remediation under the federal Superfund cleanup program.

City planning for the wastewater plant started in 2005, was postponed because of the economic downturn that started in 2007, then picked up again in 2015. Asked how it has publicized the center, Charlotte Water said it started a website and formed a stakeholder committee on May 27 that includes 11 representatives of local groups, including Wise of the Whitewater Center.

There are no signs mentioning the wastewater facility along Bellmeade Drive, the main north-south road in the immediate area.

“The impression I get is that Charlotte Water is making it happen in a low-key way,” Wise says. “There’s a couple hundred million dollars of investment and there is no public input, no conversation. They are making major steps and no one knows this thing is happening.”

Wastewater in northwest Mecklenburg is now pumped more than 20 miles to the southern part of the county. Because of the area’s expected growth, new capacity is needed and a new center is a better alternative than replacing long stretches of pipelines, Charlotte Water said.

Wise noted that Charlotte Water “has been phenomenal to us as a service provider. We buy a lot of water and they’ve been nothing but a superstar vendor. But when they build something, that’s when they start using the force of their size, and say `We are a public service and get out of the way.’”

He adds, “I know that the way the world works, if you don’t say something, you wake up one day and the project has progressed to a point where it is hard to change. That’s what’s happening with this project. … If you are going to devastate our goals, which is to protect open space, then we have a concern. ”

The Whitewater Center received $12 million in financial backing from the city and county in its initial years as interest in the facility took time to develop, though it didn’t tap the entire allotment. Growth has vastly exceeded initial projections and the venue has no plans to seek more government support, Wise says.