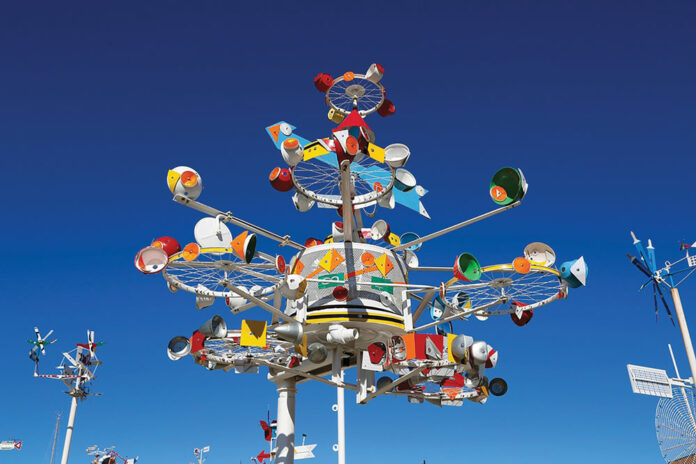 The 2017 opening of the Vollis Simpson Whirligig Park has sparked something of a building boom in downtown Wilson.The whimsical wind-powered creations from the late folk artist have drawn hordes of tourists to the previously sleepy city center, prompting more art galleries, restaurants and shops to open in long-vacant historic buildings.

The city’s downtown development office lists dozens of buildings under redevelopment including a key ingredient for successful downtowns: Residential units.

On the site of a former BB&T office complex that was demolished in 2020, Durham-based New South Ventures is developing a 240-unit mixed-use apartment complex that is slated to open in 2024. It’s the sort of building that’s common in downtown Raleigh and Charlotte but an unusual sight for eastern North Carolina.

Residents can work out in a new 70,000-square-foot YMCA next door, while leaving their cars in a new adjacent parking garage — the city’s first such deck.

The hundreds of Truist employees, many of whom worked at the site when it was called BB&T, haven’t gone far. Truist built a 95,000-square-foot office building a block away and remains downtown’s largest employer.

A few blocks down Nash Street next to the Amtrak station, the 1917 Cherry Hotel will soon get new life as a 100-room Marriott hotel with a restored, two-story ballroom.

“Our revitalization began happening later than what some of our peer communities had experienced,” says Ryan Simons, president of the Wilson Chamber of Commerce. “We are just now at the front edge of a lot of growth and development in our downtown area.”

The whirligig attraction inspired several artists to set up shop nearby, from handcrafted wood furniture maker Artisan Leaf to the colorful sculptures of Iconostar Art.

The city’s investment in the Whirligig Park, Simons says, was “a signal to the arts community that Wilson is a place that embraces the arts and wants it to be a central feature of downtown and economic development.”

Art galleries are among the businesses that have filled storefronts that sat empty for years. New additions include Casita Brewing Company,
The Hub pizzeria and arcade, the Say Fresh Market grocery and a combination co-working space and coffee shop, Gig East Exchange.

Kimberly Van Dyk has led downtown development efforts for more than a decade. She says city and county governments take an active partnership role with the business community.

“It makes a huge difference when key organizations and leaders have a collective vision and are striving together to achieve that vision,” she says.

She’s also pleased to see so many locals involved in renovating the older buildings. It’s something of a race against time because of the ravages of time. A city-owned, 130-year-old building on Nash Street had to be demolished earlier this year because it was at risk of collapsing.

“Over the next decade, we anticipate tremendous growth, increasing vitality, and continuing to create a welcoming place of opportunity and enjoyment for everyone,” Van Dyk says. ■