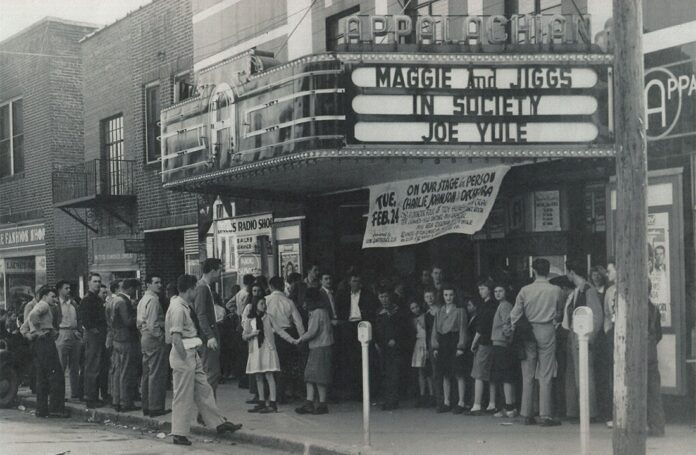 Five years ago, you never would have heard Mast General Store owner John Cooper explaining the difference between a proscenium stage — arc-shaped to allow for a curtain — and a smaller vaudeville stage. Now, he talks about fly towers, orchestra pits and other architectural components of a playhouse like a theater professional.

Cooper is campaign chairman of the Appalachian Theatre of the High Country, a nonprofit group that has raised $6.4 million to renovate the downtown Boone theater that opened in 1938 and has hosted such famous acts as the late folk singer Doc Watson. A former member of the state arts council, Cooper and his wife, Faye, own Valle Crucis-based Mast, with nine stores in the Carolinas.

The community group dedicated to restoring the historic theater first met in December 2011. Now, a 22-member board of trustees includes musicians, two CPAs, an attorney and others involved in the cultural arts.

“This is the most knowledgeable theater group that we have ever had the privilege to collaborate with,” says Steve Schuster, principal at Clearscapes, the Raleigh-based architecture firm that designed the project. His company has converted other historic movie houses across the state, including Burlington’s Paramount Theater and the Turnage Theater in Washington.

The original 999-seat theater offered both live entertainment and movies and was enormous at the time for Boone, which had a population of about 1,800. Now 18,000 people live in the Watauga County town, plus another 18,000 students at Appalachian State University.

In 1950, a fire set off by a popcorn machine gutted the building, destroying most of the original art deco elements. The theater was restored, and eventually, Columbus, Ga.-based Carmike Cinemas bought it. Carmike sold it in 2008 to local developer Frank Mongeluzzi, who invested about $1.3 million before encountering financial problems, sinking his plans for a concert hall and restaurant. The town bought the theater out of bankruptcy for $624,500 in 2011. By July 2013, the all-volunteer group had raised enough money to buy the theater from Boone for the same amount.

The project’s final price tag will be close to $9 million, Cooper estimates. There has been one large donor, with “quite a few” in the $250,000 range, he says. Foundations have provided $1.5 million.

The renovated 657-seat theater will function primarily as a performing-arts center, but an independent film series is also planned. Numerous potential users have expressed interest, including community-theater groups; the university, which plans to use it for opera programs; and Joe Shannon’s Mountain Home Music series, which features regional Americana acts.

While the first phase of construction should be complete in August, Cooper wants to move slow to avoid the experience of nearby Blowing Rock, where a community foundation took on about $5 million in debt to open a 348-seat theater in 2006. That property went into foreclosure six years later and was acquired by Samaritan’s Purse, the Boone-based Christian charity led by Franklin Graham.

“It’s important to provide a setting for people of all ages” to enjoy the performing arts, says Cooper, who is 70.  Schuster agrees. Projects like this have a “profound impact on the vibrancy on the downtowns where they are located and the cultural quality of life for their citizens,” he says.

MORGANTON – Caterpillar will close its local engine plant in 2017, idling about 100 workers. The Peoria, Ill.-based company is undergoing a worldwide restructuring due to declining sales in construction, energy, mining and rail products.

EAST FLAT ROCK – Germany-based Demmel will invest $4.3 million and hire 50 people at a local manufacturing plant, its first in the United States. The company makes trim components for cars including BMW, Tesla and Mercedes-Benz.

FOREST CITY – Part of a $6.6 million investment, U.S. Precision Construction will create at least 40 jobs in a plant that will make walls and flooring for single-family homes and residential and commercial structures including retail stores and hotels. The company is an affiliate of Mill Spring-based Tryon Equestrian Partners.