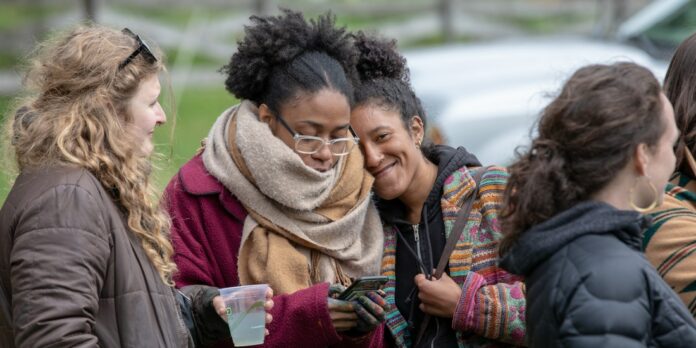 With a focus on sustainability, reputation as one of the most LGBTQ-friendly colleges in the state, and location about 10 miles east of eclectic Asheville, Warren Wilson College has established a reputation as a progressive institution.

So when Lynn Morton became the eighth president of the Swannanoa college last July, she made a bit of a splash by advocating passionately that the college should diversify political opinions on campus.

“I think every college campus is on edge,” says Morton, the college’s first female president. In today’s political environment, few people with differing viewpoints can have a conversation without screaming at each other, she says. “It’s unfortunate we all feel like we’re walking on eggshells.” She wants to create an atmosphere where students of all political persuasions and walks of life feel they can express their opinions but be challenged as well.

Colleges across the nation have been admonished by some for creating liberal bubbles and squashing conservative views. When Morton discussed her vision for the school — a diverse, intellectual hub of opinions — while interviewing for the job, the board of trustees saw it as a practical approach to an issue it has struggled with for some years: getting more students on campus. Declining enrollment is a problem at many small, private U.S. colleges, including several North Carolina campuses. Warren Wilson enrolls about 660 students, a third fewer than a decade ago.

“Her ideas on [diversity] are certainly in line with what many people on the board have felt for a long time: that we needed to broaden our appeal, because we’re maybe not appealing to a broad enough segment,” says William Christy, a Black Mountain lawyer who is chairman of the college’s board of trustees.

“I think that she’s been in some ways mischaracterized,” Christy says. Rather than simply trying to get more conservative students on campus, her broader goal is to increase Warren Wilson’s attractiveness to students across the political spectrum, from all over the world, and with various backgrounds and experiences.

For starters, Morton launched a program called “Deliberative Dialogues.” On the first day of spring semester, around 325 students and faculty showed up to talk about free speech and inclusion. “It’s a way of giving people a toolbox for how they can talk and think together when they disagree,” she says. “I think Warren Wilson can be a leader in how to do this, because we’re known for being open-minded.”

Before Morton came to Warren Wilson, the Gastonia native worked at Queens University of Charlotte for 25 years, most recently as provost and vice president of academic affairs. At Queens, she specifically focused on diversity and inclusion.

Encouraging new ideas and opinions on campus goes beyond diversifying political opinions. There’s no way to tell one’s political views on a college application, and Warren Wilson won’t be asking students to reveal that information, Morton says. It takes a more nuanced approach to make the college appeal to more people. The college is stepping up recruitment of international students and athletes, is working to improve racial diversity, has added two new majors, and eventually plans to launch programs for working adults.

To make undergraduate degrees more accessible to students from low- and middle-income families, Warren Wilson has introduced two new scholarship programs. One plan provides N.C. residents who qualify for state and federal aid with additional scholarships and on-campus jobs that cover the entire $35,500 annual tuition. A second plan, Milepost One, is for middle-class families who don’t qualify for much financial aid but still might struggle to pay private college tuition. Twenty-five students whose families earn less than $125,000 per year can apply for free tuition for four years.

These scholarships complement the college’s distinctive work program, in which students living on campus are required to spend 10 hours each week with one of 85 work crews to earn money that is applied to their tuition. Students can grow food for the campus on the college’s farm, help build tools for other workers on the blacksmith crew or assist in academic offices.

Before Morton arrived, Warren Wilson restructured by cutting 20 full-time positions and about 10 part-time ones, according to The Asheville Citizen-Times. The reductions put the college on firmer ground for various projects, including a new $6 million academic building that opens this fall.

Though enrollment figures for fall weren’t available at press time, Morton’s initiatives already seem to be making a difference close to home. Through the end of March, applications from in-state students were up 18% compared with last year, while applications from students living in western N.C. increased 57%.

“She hit the ground and said from the beginning that recruitment, retention and student experience are the three things everyone on this campus is going to focus on,” Christy says. “I think we’ve had some of the best board meetings and best open discussions since Lynn has been around.”

It’s a tough but exciting time to be a private college president, Morton says. “This is, frankly, not a job for sissies,” she says, chuckling. “You have to be able to take the heat.”