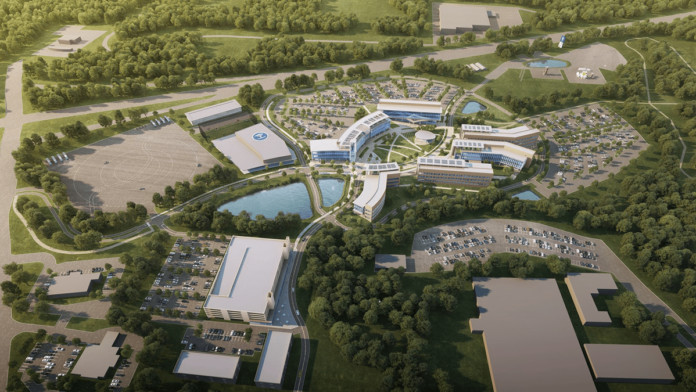 Everyone was cold last Thursday morning, sitting under a tent in Wendell at a groundbreaking ceremony.  It was an important day for Wake Tech, North Carolina’s largest community college, and especially for Eastern Wake County. But it was 39 degrees a little after 11 when I rolled up – I checked – although it ticked up to 40 when the speeches started.

The groundbreaking was at the 106-acre site where the new Eastern Wake campus of Wake Tech will rise out of an empty field over the next three years. It will be there that the workforce of the new economy will be trained in robotics, advanced manufacturing, networked machines – the so-called Internet of Things – biopharmaceutical technology, and drones. That will be in the 80,000-square-foot Technology 4.0 building – 4.0, as in the 4th Industrial Revolution  beginning to transform our lives.

Thursday, the site was a muddy expanse of gravel roads and earth-moving machines. The site’s power plant to heat and cool the campus will be finished by the end of next year with solar technology and geothermal wells. Public Safety is expected to be ready by fall 2023, and the remaining two Phase I buildings – Technology 4.0 and the 120,000-square-foot general education and student services building – should open in 2024.

It will be one of Wake Tech’s largest campuses. The original Southern Wake Campus is 145 acres, and Northern Wake is 127 acres.

Development has been slow to come to the eastern, mostly rural side of Wake County. That has been changing, as residential growth has come to Knightdale and Wendell. The highway that runs by the new campus, U.S. 64/264, will be better known by its fancier name, Interstate 87.  And growth will be turbocharged when the 540 Outer Loop around Raleigh is completed from Knightdale to Garner, possibly in this decade.

Wake Tech’s president, Dr. Scott Ralls, was Thursday’s master of ceremonies, and his invited speakers revealed something about the two-year community college system’s strategic role in the larger public education universe – from K-12 to the universities of the UNC System.  These included Cathy Moore, superintendent of the Wake County school system; Dr. Harry Ploehn, dean of the College of Engineering and Technology at East Carolina; Dr. Jerome Lavelle, an associate dean at N.C. State’s College of Engineering; and Dr. Karrie Dixon, chancellor of Elizabeth City State.

The 58-school community college system is closely integrated with high schools, where students are taking college courses that count both towards high school diplomas and associate degrees. The system is tied into the four-year universities as a source of transfer students, and increasingly, UNC schools are “co-locating,” teaching courses at the community colleges.

The state’s push to increase the number of engineering and computer science graduates will depend in part on boosting transfers from big communities like Wake Tech.  N.C. State is increasing its engineering college enrollment by 40%, to 14,000 students.  “We love our Wake Tech students,” said Lavelle.  N.C. State will have a presence at the new campus, a collaboration space where Wake Tech engineering students can be mentored and interact with students and faculty from State.

ECU has a bachelor’s in industrial technology that lets community college students with applied science associate degrees transfer in as juniors. And they’ll be able to finish their ECU degree without leaving Wake County.  “Six of the eight concentrations within that BS in industrial technology are 100% online,” Ploehn said. And the other two have courses offered at the South campus, and soon, Eastern Wake 4.0.

“It’s really a thrill when you meet many of our students face-to-face for the first time when they come to Greenville for commencement,” Ploehn added.

Chancellor Dixon drove 150 miles from Elizabeth City with a dean and a provost to make the event.  “We were up and at ‘em at 6:40 this morning,” she said. They were there because her university is trying to attract community college transfers into its emergency management and aviation programs. Two years ago, ECSU became the first UNC System university to offer a bachelor’s degree in unmanned aircraft systems. Drones will be a big focus of the new Wake Tech campus. It is a hot technology.

As if to remind everyone of that, Thursday morning, a Mavic Zoom 2  hovering at 150 feet, darting down to eye level and then back up again – courtesy of one of the engineering firms, McKim & Creed – was capturing video of the notables turning over dirt, including retired Wake Tech President Stephen Scott on the shovel next to his successor, Ralls. The crowd was fascinated; in a few years we will barely notice drones delivering prescriptions and pizza, they will be so everywhere.

I like groundbreakings because they are optimistic moments, and we need those moments now. This particular one reminds Wake County folks why they approved a $349 million bond issue in 2018. (Not that they needed a lot of persuading three years ago. Some 70,000 folks take Wake Tech classes of all kinds.)  Driving that point home was Wake County Commissioner Matt Calabria.

The county has been successful in attracting advanced technology companies with thousands of high-paying jobs, but a key has been an educated workforce, Calabria said.  “When we’re talking to the Apples and the Fujifilms of the world, to the companies who are thinking about what comes next, it’s easy for us to demonstrate that we and our education institutions are also thinking about what comes next. That we are already prepared for what they need to thrive and to succeed here in Wake County.”

Ralls made another point, too often missed. The education system is a ladder with a lot of bottom and top rungs — the bottom ones leading to an OK job, but not career advancement, and the top rungs for advanced-degree students who will get really high-paying jobs.  But middle rungs are often missing. A full set of rungs is needed  moving folks from high school to short-term certificate training to an associate degree that transfers seamlessly to a four-year university and then even on to graduate school.  This ladder needs to be accessible at all stages in a career to working people as they discover the skills they need to move up to better jobs. This is what Ralls said last April when he testified before a U.S. Senate committee about the role of the community colleges, and it was what he talked about Thursday.

The bottom rungs of that ladder start in the high schools, such as East Wake High, a half-mile from the college site, and Knightdale High, three miles east.  “The fact that we’re so close to those high schools is not an accident,” said Ralls.  “We want to be a strategic partner for all our high schools, but particularly in this area of the county.

“And we’re also going to open doors for Wake Tech graduates through our university partnerships, allowing our graduates to earn advanced degrees and continue on their career ladder. As we like to say, ‘Ladder economics at Wake Tech.’”