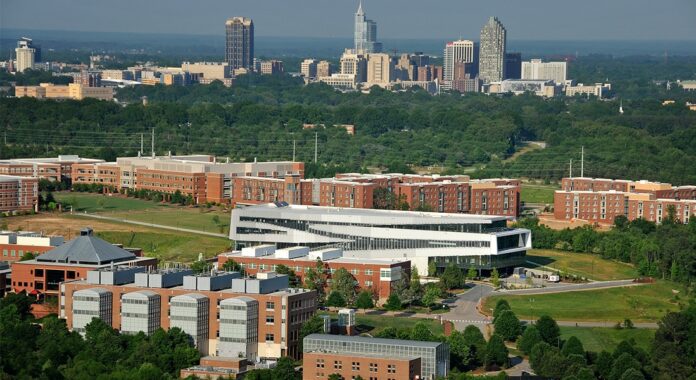 But Wake County was the real winner, seeing $3.3 billion of it. That’s equivalent to about 6% of the county’s gross regional product.

N.C. State uses its Office of Partnerships and Economic Development to foster that impact. Michael Haley, executive director of Wake County Office of Economic Development, says the university is a good example of how academia, the private sector, government and nonprofits can work together to define challenges and create solutions. “N.C. State University and its partnerships … are critical to what we do in Wake County. The university lives up to its role as a partner for us, and the Office of Partnerships is one of our first calls when we need help with new companies or existing companies. And they are always willing to work with us.”

While the Office of Partnerships and Economic Development’s work happens throughout the community, much of it is done on the university’s Centennial Campus. Its mission is collaboration. Companies may locate on campus to take advantage of the university’s research, experts and workforce resources. Together they overcome challenges and find ways to monetize discoveries.

Centennial Campus was established in 1984 when Gov. Jim Hunt carved 355 acres from the Dorothea Dix Hospital complex. A year later, Gov. Jim Martin’s administration added 450 acres, and the UNC Board of Governors approved the university’s request to develop Centennial Campus’ master plan. Ground was broken in 1986.

Today, Centennial Campus covers about 1,230 acres. Its buildings offer nearly 5 million square feet of heated space, says Dennis Kekas, N.C. State’s associate vice chancellor for partnerships and economic development. The campus looks like a beehive when school is in session; about 14,000 students attend classes here. More than 70 businesses, government agencies and nonprofits have offices on the campus, employing about 4,600 workers, he says. “Those companies either interned or hired 300 of our students and contributed $15 million in sponsored research in the past fiscal year. The value proposition for these companies to come to campus is, in my opinion, the students, subject matter experts among our faculty and specialized facilities. These companies range from small startups to global corporations, such as ABB, a Swiss energy corporation, which was our first partner.”

ABB serves customers in 100 countries. It had about $34 billion in 2016 revenue, and it calls the United States its largest market. “The Triangle is an attractive place for engineering,” says Howard Self, ABB’s smart grid distribution automation program manager. “It is a high-tech hub, which attracts major corporations. We offer attractive salaries, and it’s easier to recruit employees here. With N.C. State, we have good collaboration and good synergies.”

ABB arrived in Wake County in 1991, when it opened a 70,000-square-foot transmission technology institute on Centennial Campus. Crediting the county’s high quality of life, low cost of living, proximity to Research Triangle Park and access to recent graduates with engineering degrees, many trained at N.C. State, ABB moved its North American headquarters to Cary from Norwalk, Conn., in 2009. The next year, ABB spent $10 million to open the Smart Grid Center of Excellence on campus. It’s here that ABB employees develop and showcase to customers their advancements that maximize electricity delivery by minimizing costs and disruptions. Self says the Triangle has become a global hub for smart grid and other clean technology, which uses innovation to add environmental sustainability to products, processes and services. There are more than 300 clean-tech companies in the Triangle.

Kingsport, Tenn.-based Eastman Chemical Co. put its Eastman Innovation Center on Centennial Campus in 2013. It negotiated an agreement with the university to retain intellectual property rights for products it develops here, an unusual move at the time. Today, that agreement has become the basis of a master research agreement that enables the university to negotiate IP terms in addition to costs and scopes of work.

Raleigh-based open-source software developer Red Hat Inc. was forged from humble beginnings in Durham in 1993. It moved to one floor of a 120,000-square-foot building on Centennial Campus in 2002. It outgrew that building in four years, and the company moved to Red Hat Tower, a 19-floor downtown skyscraper, in 2012.

New York-based research and risk-management provider LexisNexis Group moved its Cary office to Centennial Campus, using space that formerly housed Red Hat, in 2013. “LexisNexis started on campus with about 150 employees, and they have about 700 now,” Kekas says. “We knew they were going to grow, but we didn’t know they were going to grow this fast, and they’re still growing.” In March, it and the university opened the 1,500-square-foot LexisNexis Experience Innovation Studio. It will be operated jointly, offering employees a place to collaborate with customers on projects and students a place to work.

While large companies are important partners for the university, startups and entrepreneurial enterprises are its heart and soul. Its Entrepreneurship Initiative Garage gives students a place to prototype, refine and collaborate on their ideas. They keep any IP that they develop, which is vital to turning them into a business later. Thomas Miller, N.C. State’s senior vice provost for academic outreach and entrepreneurship, oversees the space.

Raleigh-based Undercover Colors Inc. started in the Garage in 2014. Engineering students asked: What if nail polish had an ingredient that would enable wearers to detect date-rape drugs in their drinks at bars and social gatherings? “Dr. Miller told them, ‘You seem to be passionate about this. Why don’t you go try it?’” Kekas says. “They were students at the time and didn’t have a company, but they raised all kinds of money, formed their company and today they’re worth millions.” Undercover is still growing on Centennial Campus.

The Office of Partnerships and Economic Development is taking on a new role, helping universities nationwide. “I got a call yesterday from the University of California Riverside asking, ‘Can you help us? Why does your model work so well?’” Kekas says. “The University of Texas at San Antonio was here not too long ago. We’re pretty open about what we do. We believe that if you want to receive, you’ve got to be willing to give a little bit, and that’s our mantra.”

Wake County’s Haley says other schools recognize N.C. State’s historical strengths: Its leaders see the future, react to it and lead the way forward. Kekas says that future is vast. He recently wrapped up the Triangle’s inaugural Smart City Summit, which brought together city, industry and academic leaders to discuss ways to make the region better.

Smart Cities use technology to collect data — such as traffic counts, air quality or water leaks — that enables them to make real-time decisions and increase operating efficiency. “I came out of the computer business, and I have learned that one of the mistakes you can make is to get complacent,” Kekas says. “And so, we keep trying to think about what’s coming next, so we don’t fall asleep at the switch, and part of that is to continue reinventing ourselves. Success breeds success.”

Click here to see a PDF of the Wake County section