Vietnamese automaker is NC’s biggest jobs deal ever, but will it happen? 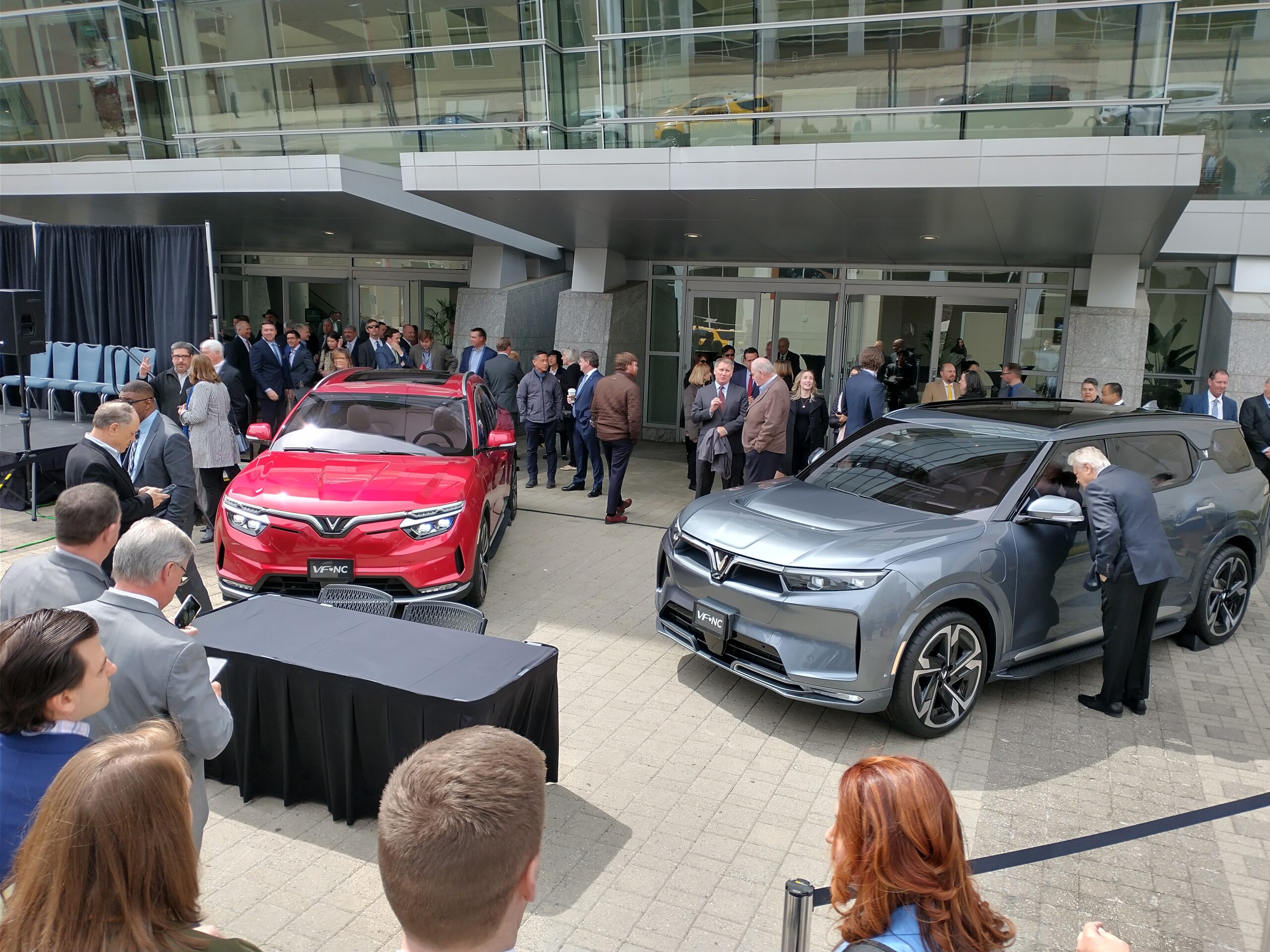 Vietnamese company VinFast’s plans to build electric SUVs in Chatham County marks the “largest economic development announcement in the state’s history,” according to the governor’s office.

But the big question is, can they pull it off?

There’s reason to be a bit skeptical. VinFast is a relatively young company, founded in 2017 from a larger Vietnamese conglomerate called Vingroup. Its first-ever cars just rolled off the assembly line a few months ago, but the company is thinking big: its Vietnam facility will have a capacity of 950,000 vehicles per year by 2026. Its first sales in the North American market won’t happen until later this year.

The company parked two of its latest models, the VF 8 and VF 9, outside the Raleigh Convention Center Tuesday for dignitaries to check out. U.S. pricing for those models hasn’t been released yet, but in Canada they’ll cost between $50,000 and $70,000 and buyers will have to lease the battery for a separate cost.

At the Triangle Innovation Point megasite in Chatham County, VinFast plans to start construction later this year, with the first cars rolling off the assembly line in July 2024. CEO Thuy Le said the plant will produce 150,000 vehicles per year in the first phase.

“We believe that this company has the capability and the financial backing to very quickly move into this market,” Cooper told reporters.

VinFast will receive jobs incentives grants worth $316.1 million, paid out over a 32-year period. Much of the state incentives come in the form of infrastructure upgrades needed to make the facility work, such as roads and utility connections.

The N.C. Golden LEAF Foundation approved a $50 million grant Tuesday to the city of Sanford to extend water and sewer lines to the plant. And state legislators plan to vote during the short session that begins in May on a package of up to $450 million in needed infrastructure for VinFast.

“The expectation is that there’s going to need to be some transportation work, some highway work, some water and sewer, some site grading and those sort of things,” Senate leader Phil Berger told BNC on Tuesday. Those projects are needed regardless of which company ultimately lands at Triangle Innovation Point. “All of those things are necessary infrastructure for the existence of manufacturing at that location,” he said.

Cooper also stressed that the state’s JDIG program requires job creation before the incentives are issued, and “there are some clawback provisions in the event this doesn’t work out.”

VinFast could be a bit of a gamble for North Carolina: Will the company be able to effectively compete with established automakers in the electric vehicle market? Can it get an operation up and running in just over two years at a site that still needs lots of work?

As if to underscore the challenges facing the electric vehicle market, Tuesday’s announcement was briefly interrupted by someone driving by in an extremely loud, beat-up old pickup truck. Rep. Robert Reives, D-Chatham, paused his prepared speech to joke that “that guy’s going to have an electric car soon – if he’s still got a license.”

But if the bet pays off, state officials estimate that it will “grow the state’s economy by at least $71.59 billion over 32 years,” according to a news release from the governor’s office. “This facility will draw vendors and suppliers from far and wide,” Cooper said.