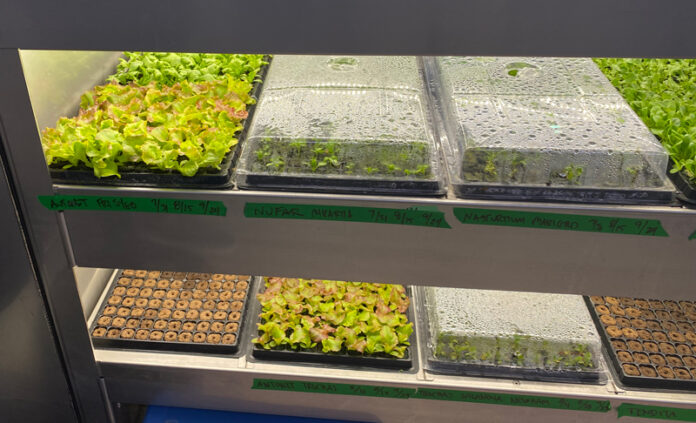 Freight Farms is a nine-year-old company that sells high-tech shipping containers designed to efficiently grow things like lettuce. These containers don’t take a lot of room and can be located almost anywhere there’s power and water.

That’s why I was at 518 S. West Street in Raleigh recently.  It is one of a dwindling number of lots in and around downtown that doesn’t have something tall and condo-ish going up on them. It is mostly hidden behind a fence. On the other side of the fence are a couple of containers  owned by builder Trevor Spear.  There’s also a number of cars, because another tenant is a repo guy.

I was visiting because I wanted to see what it is like to grow lettuce inside a shipping container.  Freight Farms sent folks down to Raleigh to promote their business and educate prospective farmers. 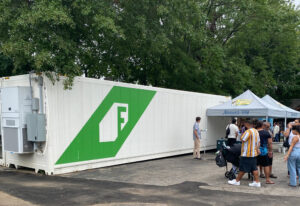 I walked into a 40-foot container that was a climate-controlled, insulated hydroponic farm, filled with racks of gourmet lettuce. It was a 320-square-foot metal box that was the equivalent of a 2 ½-acre farm. These cost around $149,000 each. In the nursery at the front were young plants growing in a mix of peat moss and coconut coir, which I learned is the outer husk of a coconut. At three weeks, they would be transplanted to 88 vertical panels with five channels, as many as 50 plants per channel.  Inside a channel is a piece of cotton that soaks up water and nutrients, and that plug of peat and coir lets the roots of each plant touch the wicking strip and extract what it needs. They continue growing for several more weeks, the salanova, romaine, and butterhead, among other varieties.

“And we use about 99% less water,” said David Ridill, an account executive who was doing the tour.  “On a daily basis, this uses no more than about five gallons of water.”

“Everything is automated, so there are sensors throughout that are monitoring our climate, our temperature, our humidity and our CO2. We also are able to run the lights and, also, with our sensors, we take care of the water.  Real-time, we have pumps that are constantly bringing water over sensors, so we can always be seeing what the nutrient levels, what the pH level of the water [is],” said Ridill, who has run his own container farms in Idaho.

The company was founded by Jon Friedman and Brad McNamara,  a couple of young, Boston-area marketing guys who thought back in 2010 they could do this with rooftop greenhouses. Like a lot of startups, they had a general idea — urban, unconventional farming — but they needed to make some adjustments.  They hit on shipping containers, which could all be outfitted the same way and put in a lot of different places. They can be moved around; if one vacant lot gets developed, there are other parcels that may be available for a few years yet.

Freight Farms was launched with a Kickstarter crowdfunding campaign and incorporated in 2013.  By 2015, it had sold 50 farms and raised Series A funding.  By 2017, it was on its third round of funding and had expanded to Europe and Middle East. According to filings with the Securities and Exchange Commission, Freight Farms has raised more than $24 million from investors. It has gotten attention from publications like Forbes.

“It’s the largest connected farm system in the world,” said Rick Trenchard, the company’s director of business development.  “Leafy greens are optimal but we want to get into vine crops like tomatoes.”

The first container was installed in 2012 at Boston Latin School, and it is still operating

Today, the company, with around 60 employees, has more than 500 farms in 48 U.S. states and territories and 38 countries, and 600-plus trained farmers, all networked back to folks in Boston who monitor the containers and are harvesting billions of data points. Freight Farms’ proprietary software and data may wind up being the most valuable part of the business.

One of the connected farmers is Spear, whose operation is called Nanue’s Farm. Nanue was his grandmother’s nickname, in Little Washington, where Spear used to help her in her quarter-acre garden. Spear, who grew up in New Bern, read a magazine article about Freight Farms, and did a tour in Boston in February 2019 and took delivery that December.  He made it through the pandemic, when his customers, restaurants, were closed.

“It was a train wreck. We started a home-delivery business, taking four heads, five heads [of lettuce] to someone’s home. Just paid the power bill and [kept] the lights going. “

In the past six months, his business has picked back up, as restaurants have been buying locally sourced produce again. Now he’s selling about 400 heads a week, and predicts business will double in the next six months.Nanue’s Farm is starting to be profitable, Spear said.  “We can grow 1,000 heads a week.  Those two containers can grow 500 heads each.”

“The lettuce is really high end. It’s a little pricey,” said Spear.  “But we grow obscure varieties you can’t get anywhere else, by design.” And it is fresh. He is delivering produce that’s just hours from being harvested. “It literally is farm to table in hours.”

Hydroponic farming – growing produce indoors in nutrients without soil – has been taking off.  Companies such as Charleston-based Vertical Roots and BrightFarms, with a 280,000-square-foot indoor salad farm that opened in Hendersonville last year, have been selling to major grocery chains.

Visiting Nanue’s Farm on the day I was there was Ron Fish, from the N.C. Department of Agriculture and Consumer Services.  He is an assistant director for agribusiness development, and is focused on trends in farming.

“Basically, what we’re seeing is this continued evolution of controlled-atmosphere production,” said Fish. It is going in different directions. Some enterprises are essentially large-scale, high tech greenhouse operations, Another direction is the smaller footprint containerized model, which began emerging more than a decade ago.

The container model can work, said Fish, “if you’re first in the area and you can lock up enough high-end restaurants within five or six blocks of where you are. Then it becomes a very good model.”

What I found particularly interesting about Nanue’s Farm was its location on the west side of downtown Raleigh. This has been one of the fastest-developing commercial sectors of the city, with new offices and condos and restaurants, emblematic of the urban growth that has transformed North Carolina from a rural state to a technology and finance powerhouse.

Outside the rapidly growing urban areas, perhaps not as visible, is a lot of agriculture and agribusiness – the farm and food processing sector that contributes more than $90 billion annually to the North Carolina economy. It is everywhere beyond the cities and suburbs, but it can be hard to see from the interstates, like shipping containers behind a fence.