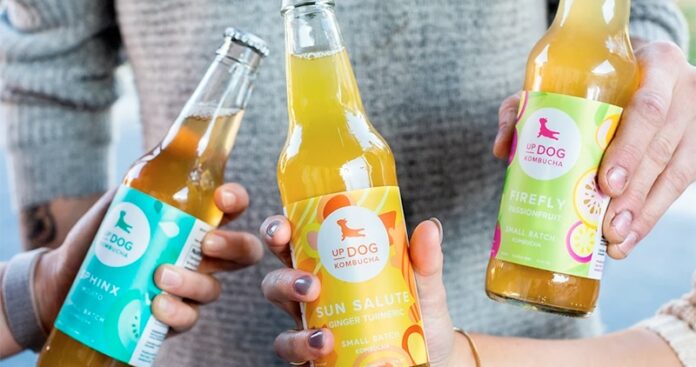 A hobby for two Wake Forest students has grown into one of the region’s better-known kombucha producers.

Olivia Wolff and Lauren Miller, both 26, had no idea that their first batch of kombucha brewed in a Wake Forest University dorm room five years ago was the start of a flourishing business. But that’s how UpDog Kombucha, a handcrafted, small-batch kombucha microbrewery, was born. UpDog’s drinks can be found in Sycamore Brewing in Charlotte, Piecewise Coffee in Cayce, S.C., and about 90 other breweries, markets and shops. The beverage is also sold at a few farmers markets.

“We built UpDog from the ground up ourselves. I am proud of the brand we built and the product that we make,” Wolff says. “We have built a really relatable brand, and we are always working at bettering ourselves.”

Kombucha, a fermented, fizzy beverage made using tea, sugar, bacteria and yeast, contains probiotics, prebiotics and antioxidants, contributing to several health benefits. UpDog Kombucha’s recipe is constantly undergoing fine-tuning and changes, according to Wolff. “This is mostly because kombucha is raw and unpasteurized, meaning it is a ‘living’ beverage, and flavor can vary.”

Though Wolff wouldn’t reveal specific revenue figures, she says the business has been profitable since Day 1. Bottles and glasses on tap typically cost about $5 per beverage, while growlers retail between $10 and $18.

In fall 2015, Wolff began making her own kombucha as a hobby during her senior year at Wake Forest. She realized how much kombucha she was buying at the store, so she saved money by compiling a few recipes and making her own batch.

When friends and family started showing interest in her brewing process, she started selling bottles for a small amount of money to people she knew and trusted.

“Friends would Venmo me for a Mason jar of kombucha, I would drop it off and they would pay for refills. I was like the milkman,” Wolff says. She later wrote about her kombucha experimentation in the Wake Forest chapter of Spoon University, a food publication.

Miller, then a Wake Forest junior, read the article and was intrigued by Wolff’s homebrewing process. Miller followed Wolff’s directions, made her own batch and was sold on the product, so she joined Wolff’s brewing team.

That winter, the homebrewers officially launched the UpDog Kombucha brand. Its cheeky French bulldog logo and yoga-inspired drink names, including Happy Baby and Sphinx, come from the founders’ love of dogs and yoga.

“At the time, there were a few photos on the internet floating around of French bulldogs doing various yoga poses,” Wolff says. “This was the inspiration for the UpDog dog.”

Wolff and Miller initially sold UpDog Kombucha to Wake Forest students through social media direct messaging. Students would send their orders, pick up their bottles in dorm room lobbies and later return their bottles for refills. “The brand ended up catching on like wildfire,” Wolff says.

During the first day, Wolff and Miller decided to cap at 40 orders. To their surprise, they hit the 40-bottle mark in less than an hour, which was a nudge of encouragement for the days to follow. They later sold roughly 160 bottles of kombucha each week, which was carefully fermented in Miller’s college suite and prepared in a dorm room kitchen.

The students kept UpDog Kombucha’s dorm room operation under the radar until it was moved to a commercial kitchen space. It later found its more permanent home in a transformed 2,000-square-foot warehouse also in Winston-Salem, featuring fermentation tanks, coolers and triple-basin sinks.

Wolff graduated from Wake Forest in 2016 with a degree in health and exercise science, and Miller followed in 2017, majoring in economics. Miller manages operations in Winston-Salem, and Wolff handles the Charlotte market in addition to a few South Carolina accounts.

Kyle Cameron joined as head brewer in 2017. “He has basically learned everything on the fly and has grown with us. He really cares about the product he puts out,” Wolff says.

Over the last five years, Wolff and Miller have built a recognizable brand with a loyal customer base. “We want to make the experience of our customers and the people who support us a good experience, so we do whatever it takes to make it positive for people,” Wolff says. “If you have a problem with something, you can bet we are fixing it.”

Wolff and Miller have kept the business debt-free and alive during the COVID-19 pandemic. Because of statewide regulations, UpDog Kombucha shifted its business model slightly, adapting home-delivery services to stay ahead of the economic decline.

“When COVID really came to a head in the spring of 2020, we decided we had to adapt and pivot our business to accommodate direct-to-consumer [sales] since previously most of our business had been wholesale customers, and a lot of those spots were temporarily closed or operating at a very limited capacity,” Wolff says.

Wolff and Miller added an e-commerce option to the website and started a home-delivery service last March, dropping off 12-pack cases on customers’ doorsteps. A case costs $40, according to an early January website offer. “We have been going strong with it ever since. We never anticipated that we’d be in the direct-to-consumer space, but we are glad that we were able to adapt quickly so we could provide our customers with our product,” Wolff says. ■