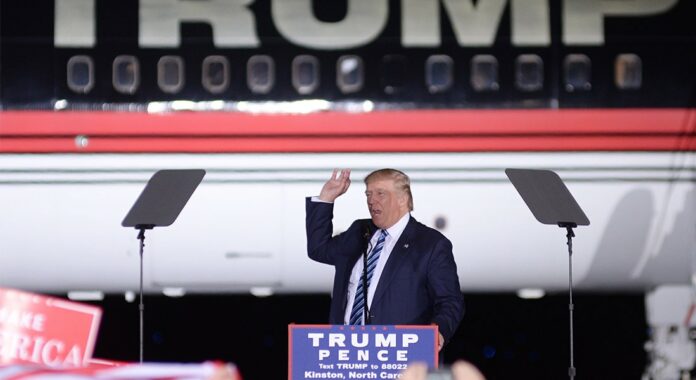 Like the rest of the much-maligned mainstream media, I knew that our next president would be the first woman to hold the job. The New York Times said so every day for months, comparing Donald Trump’s chances of winning to an NFL kicker missing a 38-yard field goal, or less than 20%.

So it was easy to say, “No way,” when two conservative buddies in eastern North Carolina asked me to drive eight hours round trip to Lenoir County to attend a weeknight rally for a guy who would soon be yesterday’s news.

More than 5,000 people had a different outlook, attending Trump’s boisterous event at the Kinston Regional Jetport on Oct. 26. “We are going to bring back your jobs, and we are not going to allow companies to take the jobs to Mexico,” Trump said, according to news reports. “We are going to make things here again.”

He added, “We are going to have the biggest tax cuts since Ronald Reagan. We will rebuild our military and support our vets and the men and women of law and order.”

Who could argue with that? Certainly not the good folks of Lenoir County, where median household income is about $36,000, the median home value is $92,000, 22% live in poverty and each of the 16 public schools this year received grades of C, D or F based on student performance. The promise of revitalized factories and lower taxes sounds pretty good.

Living in Charlotte or Raleigh or Greensboro, it’s easier to focus on the sunny side: The number of unemployed in our state has declined 55% in the last six years, with about 500,000 more people holding jobs, as Gov. Pat McCrory reminded us a couple of thousand times in the weeks leading up to the election. In North Carolina metro areas, the bigger priority is bringing back workers — especially carpenters, plumbers and other tradespeople — rather than jobs.

We pundits, and the global trade advocates, got it wrong. The Kinstons of the United States elected Trump, who now has four years to make good on his promise to revive factories in manufacturing towns like Morganton and Lexington and Lumberton while doubling the pace of economic growth. Helping that happen as a key adviser is Charlottean Dan DiMicco, the former Nucor CEO. He helped build a giant steel company, including a Hertford County mill, when he wasn’t raging against unfair trade pacts and currency schemes.

Seeking forgiveness for my error in electoral judgment, I slid into the back row of Charlotte’s liberal Myers Park Baptist Church to hear state NAACP President William Barber deliver a “National Sermon on Race” five days after the election. (Every other seat was taken.) For 80 minutes, the state’s most prominent progressive railed against racism and conservative evangelicals and a rigged economy that favors rich over poor.

On the last point, Barber sounded a lot like our new president, who also favors the word rigged. And why wouldn’t the Rev. Barber? When he isn’t leading protests, he pastors a church in Goldsboro, 30 miles from Kinston.