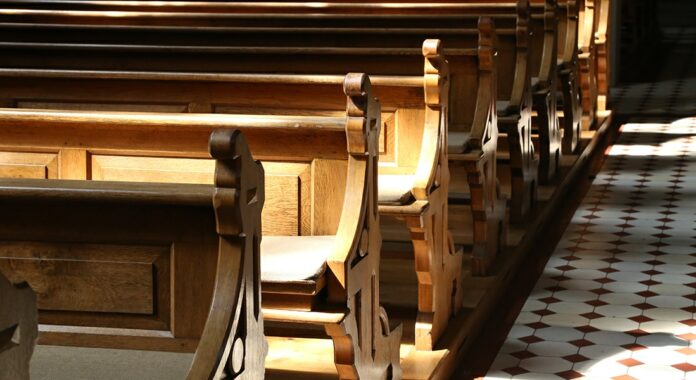 If that strange church photo on this month’s cover seems misguided for a business magazine, blame my grandmother Doris. The kindest, sweetest person I’ve known, she exerted great influence on me, including making clear that there was no optionality about how her young grandchildren spent Sunday mornings. My parents showed much less interest in our church, while my grandpa concluded that paying for the organ was enough to give him a pass from regular attendance.

Doris would be pleased, however, that my habit of worship attendance hasn’t lapsed despite much temptation. The whole experience of checking in weekly with longtime friends and an occasional newcomer, listening to some inspired commentary, and singing with others in worship remains a joyful one.

Fortunately, my grandma steered me to a faith tradition that, for the most part, celebrates thinking and openness to different viewpoints rather than a rigid approach that would have repelled me long ago. Contrary to popular opinion, I’ve never been taught that attending church makes one superior to folks spending Sundays fishing or golfing. Instead, the consistent message is that one learns from all comers and that giving is more important than taking — concepts of which I consistently fall short.

Staying involved in church, however, has made it easy to notice how the influence of many religious institutions is declining, probably at an accelerating rate. It hit close to home in February when my late in-laws’ 67-year-old church on a busy Charlotte street closed after weekly attendance tumbled from a peak of 200 decades ago to fewer than 40. My church is holding its own, but it’s obvious that people find many alternatives to Sunday worship and seek fulfillment in different ways. The pressure to conform to my grandma’s wishes is wilting.

Because of this major societal shift, we asked Ed Martin to look into its economic impact on North Carolina. Ed grew up at a one-room country church that his great-grandfather built. His report confirms that church membership, attendance and contributions are slipping, particularly in mainline denominations that have been dominant in our state for centuries. Many once-robust N.C. churches have surprisingly small crowds on Sunday mornings, despite our state’s impressive population growth. Dozens of others have shut down and are up for sale. Anecdotally, I’ve noticed that our state’s business leadership appears less involved in church governance than 10 or 20 years ago.

In the place of local congregations, a couple dozen supersized megachurches have emerged in North Carolina, led by highly skilled leaders with clear evangelical visions. BNC featured one last year: Rocky Mount’s Word Tabernacle Church led by N.C. Rep. James Gailliard. While powerful, however, such churches remain the exception and always face the question of what happens when the star preacher leaves.

Ed documented that lots of money flows through churches, which justifies our magazine’s interest. But he also concluded that declining local churches can have a profound, negative effect on the central role that they have historically played in caring for the marginalized, training Boy Scouts and Girl Scouts, teaching English to immigrants and countless other services. Losing that community base is discouraging, particularly when it coincides with declining trust in other traditional institutions, including the local newspaper, public schools and civic organizations.

I’m an eternal optimist, which is another influence attributable to my grandma, who persevered through the Great Depression, world wars and other challenges more severe than I’ve faced. Churches, synagogues and mosques will remain essential bedrocks of our society, but in a different, less pronounced way.