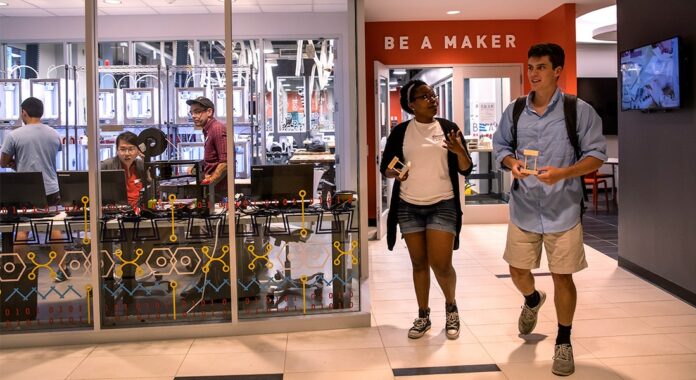 Gloria Nyankima, left, a fourth year UNC-Chapel Hill graduate student from Auburn, Ala., majoring in biomedical engineering, walks out of the Be a Maker (BeAM) makerspace in Murray Hall with first year graduate student Thomas Kierski, also a biomedical engineering major. BeAM is a network of makerspaces where students can participate in the design and making of physical objects for education, research, entrepreneurship and recreation. Provided by The University of North Carolina at Chapel Hill

Accelerating UNC Chapel Hill’s profile as a startup hot spot is an increasing priority that is panning out, according to the university’s top innovation executive. Former Chancellor Holden Thorp hired Judith Cone as a vice chancellor in 2009 after she had worked for 15 years at the Kauffman Foundation, a leading entrepreneurship think tank based in Kansas City, Mo. She’s helped build Innovate Carolina, a university-wide project to turn ideas of students, professors and alumni into successful businesses. While university schools and departments often work in silos, Cone’s group is an advocate for commercialization activity across campus.

As of June, the university counted 475 affiliated ventures, a 26% increase from a year earlier. About three-fourths of the ventures, which range from one-person research projects to publicly held companies, remain active, and 85% are headquartered in the state. The businesses employ almost 64,000, according to the Innovate Carolina database.

UNC is among the few large U.S. research campuses without an engineering school, which tend to be tech-transfer hot spots. (Cone cites Emory and the University of Chicago as others.) But Chapel Hill has a good relationship with N.C. State University’s engineering school, she says, reflected by a joint biomedical engineering major and cooperation among the institutions’ venture-capital arms on various projects.

Helping professors and students come up with money is a big part of the effort. Many investors are hunting for promising research,and UNC “wants to make sure that faculty goes into negotiations with their eyes wide open and are well-coached on the process,” Cone says.

While N.C. State’s innovations are more software-oriented, Innovate Carolina’s activity mostly involves life-sciences research at the medical and pharmacy schools. A star performer is G1 Therapeutics, which is developing anti-cancer drugs based on initial research at UNC’s Lineberger Comprehensive Cancer Center. G1 raised $108 million in a May public offering and had a market value exceeding $680 million in mid-September. “We get goose bumps thinking about G1’s potential,” Cone says.

Bruce Efird was named chief executive officer and president of Variety Stores, the subsidiary of Henderson-based Variety Wholesalers that operates about 400 discount stores in 17 states, including Roses, Maxway and Super 10. Efird succeeds Wilson Sawyer, who will become president of the parent company. The Albemarle native is a former CEO of Fred’s, a Memphis-based chain of about 600 discount stores and pharmacies. He recently led the short-lived Dollar Express, a Charlotte-based chain of more than 300 former Family Dollar stores that was owned by New York-based Sycamore Partners. Family-owned Variety Wholesalers traces its roots to 1923, when James Melvin Pope started a dry-goods store in Angier (“Art of the deal,” July).

Small-cap biotech stocks with promising drugs must add capital or sell to stronger parties. Durham-based BioCryst Pharmaceuticals is a textbook case, raising $45 million in March in a stock offering, then announcing plans for $80 million more in September. The company is developing a drug to treat angioedema, a rare condition that causes swelling in the face, limbs and throat. Over the last seven-and-a-half years, the company reported a cumulative loss of $334 million. Shares have traded between $2 and $15 in the last two years, showing its speculative nature. But it keeps attracting investment and traded for about $5.50 in mid-September. Veteran pharmaceutical executive Robert Ingram is chairman.

MORRISVILLE — Livonia, Mich.-based Valassis will acquire MaxPoint Interactive for about $95 million. MaxPoint is a digital-marketing company that went public in 2015. Valassis is a subsidiary of Harland Clarke Holdings. The deal is expected to close in the fourth quarter.

OXFORD — Revlon will add 55 jobs over three years and invest $16.1 million at its local cosmetics plant. The New York-based company employs more than 1,300 people in the state. The expansion will increase production of its Elizabeth Arden fragrance and skincare products.

RALEIGH — Red Hat director Narenda Gupta was elected chairman. Gupta is managing partner of Nexus Venture Partners, a Menlo Park, Calif.-based venture-capital firm he founded in 2006. He previously co-founded Integrated Systems, a software developer that merged with Wind River Systems before it was acquired by Intel in 2009. He succeeds Gen. Hugh Shelton, who retired.