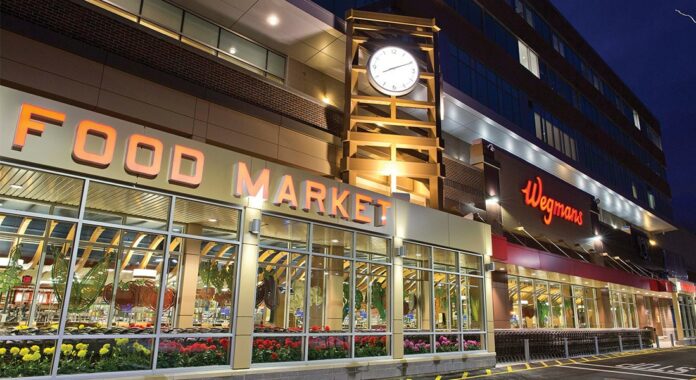 Wegmans is beloved by shoppers because it blends a fresh produce selection that has been compared to Whole Foods and low prices that make it competitive with Wal-Mart. Wegmans topped Consumer Reports 2016 survey of U.S. supermarkets, edging out Publix and California-based Trader Joe’s. Founded in 1916 by brothers Walter and John Wegman, the chain trumpets a “European open-air market feel” that includes several small restaurants. Stores run 75,000 to 140,000 square feet, compared with a typical Harris Teeter or Publix, which are about 40,000 to 60,000 square feet.

Led by CEO Danny Wegman, Walter’s grandson, the chain had annual sales of $7.9 billion in 2015 and employs 47,000 people at 92 stores in New York, Pennsylvania, New Jersey, Maryland, Massachusetts and Virginia.

Reflecting Wegmans’ allure, Chapel Hill and Orange County in October approved an incentives package of $4 million related to a 130,000-square-foot store that will be built at the city’s northern edge on U.S. 15-501 near Interstate 40. The incentives, which hinge on adding 350 jobs over five years, will help offset environmental remediation costs at the site, company spokeswoman Jo Natale says.

Wegmans is looking south for growth: North Carolina’s population increased by 5.3% from 2010-15, compared with 2.2% in New York and 1.9% in New Jersey. Wegmans’ expansion is more subdued than much-larger chain Publix, which opened its first North Carolina store near Charlotte in February 2014 and now has nearly 40 stores open or planned in the state. The employee-owned chain has more than 1,100 locations in six states, with sales of $32.4 billion in 2015.

But Wegmans seems up to the challenge of expanding past the Richmond, Va., area, its southernmost outpost with two stores. Unlike many of its peers, the company has never pulled out of a market after establishing a store.

YOUNGSVILLE – Insulation maker K-FLEX USA will invest $45 million in an expansion that will nearly double the size of its existing plant and add 100 workers to its current 195. The company is a subsidiary of Italy-based IK Insulation Group.

RALEIGH – Brent Burgess resigned as chief investment officer of Triangle Capital, a publicly traded business-development company. Burgess was the second of the company’s founders to step down this year: Former CEO Garland Tucker resigned in February and was succeeded by Ashton Poole. Mark Mulhern, chief financial officer of Highwoods Properties, joined the board of directors.

RALEIGH – Plexus Capital completed its fourth fund, raising $400 million. The business-investment company has raised more than $950 million across four funds since it was started in 2005. With offices here and in Charlotte, Plexus has invested $562 million in 77 middle-market companies.

PINEHURST – FirstHealth of the Carolinas will acquire the 64-bed Sandhills Regional Medical Center in Hamlet, in Richmond County. Financial terms were not disclosed. Based here, FirstHealth operates four hospitals and medical clinics in 15 counties in central and eastern North Carolina.