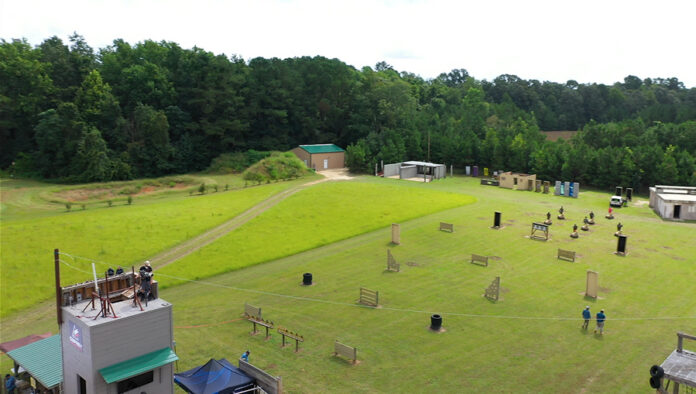 I met Richard Kristof in September in an underground tunnel complex in Bladen County.  He was conducting a tour for some of us.

The tunnel complex was at the Osprey Training Facility. It simulated places that special operators might need to go down into after bad guys.  Kristof is chief operating officer of TriHelix Investments. One of the firm’s companies built the 194 feet of tunnels with a special concrete that can catch bullets in live-fire training instead of having them ricochet.

TriHelix owns and operates six companies and invests in about 24 others.  One of the first companies it owned was Global Verification Network, a background-screening business based in the Chicago area. TriHelix’s CEO, Mark Buchmann, is also CEO of GVN.  Another company, majority-owned by TriHelix, is Investor Services Company of America, which focuses on providing consulting and technology services to the alternative capital space. Kristof, who works out of a Cary office, is CEO of that firm, which also focuses on the EB-5 immigrant investor sector.

Four years ago, an affiliate of TriHelix acquired 80% of 360 Ballistics, which developed the Amidon brand of concrete for military training facilities like the one in Bladen. And TriHelix is an investor in PRTI, a Franklin County company that turns waste tires into energy and industrial commodities. “We’re raising $25 million against [a] $290 million valuation,” says Kristof, a PRTI board member.  TriHelix is also an investor in Cary’s Fortnight Brewing, where Kristof is a board member.

TriHelix also has a software arm, TriHelix Software, which does development for its own portfolio companies and outside firms.  One of its clients is Tractor Supply.

All told, TriHelix has around 31 employees in its various owned-and-operated companies, plus a variety of other contract folks.

Its investments are diverse, but they fit the TriHelix investment thesis: Small, entrepreneurial, high-energy companies with growth potential. It prefers to work with existing management.

Kristof is a Connecticut native and a graduate of Fairfield University. He has been a business executive in the Research Triangle for around 30 years, mostly for technology companies. His expertise is in helping companies grow and build business relationships and networks. Sometimes people think that business development is about sales, but it is really about developing the right partnerships with other companies and players.

Like many who have worked in the volatile technology economy over the past three decades, he has experienced its turbulence. He was CEO of American Research Institute, a fast-growing Morrisville tech training firm that fell victim to a tough economy during the Great Recession and shut down in 2011.

“Your setbacks are your biggest learning experiences, hands down,” he says.  “Stay humble, because eventually you’ll get humbled.”

I met Kristof at the Defense Applications Expo (DAX), where he was helping retired Brig. Gen. David L. Grange, who is president of Osprey Global Solutions. It was part live-fire exercise and part trade show, but also the kind of networking opportunity that fit under the heading of business development. Ideally, vendors came away with relationships that could move them forward.

“The government needs to buy the complete solution,” says Kristof. “They don’t want to buy the coolest drone in the world that doesn’t interface with the heads-up displays and the other infrastructure and can’t do ISR [intelligence, surveillance, and reconnaissance] with robots, and can’t see through this particular thing, even though it’s the coolest drone in the world.”

“What we’re missing in our economy is integrators,” he says.  “People who can say, ‘Oh, this is the best of this, this is the best of that. But they aren’t really going to work unless we can make them into one thing.’ And there are other states who do a better job of pulling together the resources.  DAX is one of our answers, to be able to pull people together.’”

The history of Amidon concrete is a business development case study: How to take a business that was created for one very specific customer base and extend it into new markets.

The original shock-absorbing concrete was developed by the U.S. Army Corps of Engineers. Known as SACON, it was a mixture of Portland cement, foam, fiber and other materials, and it was designed to create walls in military and law enforcement shoot houses that would trap bullets and other projectiles. The military licensed it to private companies. One problem was the original formulation didn’t work  consistently and was hard to manufacture in hot climates where many training facilities are located.

Amidon was a Wake County homebuilding company. Clay Amidon and a Youngsville concrete contractor, Mark Siver, patented an improved version that was more consistent and could be manufactured in temperatures up to 120 degrees. Through a separate company, 360 Ballistics, they produced more than 50,000 blocks of Amidon Ballistic Concrete, including 18,000 for more than 20 buildings at the 29 Palms Marine training base in California. Amidon Ballistic Concrete structures are at Fayetteville’s Fort Bragg, Fort Polk in Louisiana, and Fort Bliss in Texas.

“The main reason why we decided that we wanted this company wasn’t to go out and build more shoot houses for the military,” says  Kristof. “It was because we wanted to invent something brand new.”

That has become Amidon Shield, a building-grade concrete, which adapts the shock-absorbing qualities of the ballistic concrete, which is a 1,400 PSI product, and makes it much stronger.  “We were shooting for maybe 3,500 PSI.  We’re going to release this as 4,500 PSI concrete, but it’s been tested by independent testing firms to 5,880 PSI.”

Many schools, police stations, consulates and other potential targets  aren’t hardened for attacks from weapons or explosives.  Buildings in coastal locations are vulnerable to storms.

The independent testing of the product has been completed.  “We sell them either the additive or the license so they can buy the additives under our brand,” says Kristof.  ‘We will never build actual buildings. We’re not a builder.”

What’s next is meeting with engineering firms and other decision-makers.  “We’re saying, ‘Hey, we’ve got this thing we’ve been talking about for two years. We’ve got it done. It’s ready to go. We have independent certified data that says it can do what we said it can do.”

Kristof knows the strengths and weaknesses of North Carolina’s innovation and startup ecosystem.  That’s a reason he was appointed to the NC Board of Science, Technology &  Innovation.

He’d like to build what he describes as a “true” business incubator.  What Kristof has in mind is an ecosystem, with linkages between graduating companies and new ones just getting started. “If you incubate companies, the next company out needs to be a resource for the next company in,” he says.  His incubator model would provide administrative services such as accounting, human resources and technology support, “back-end infrastructure stuff.”  It would assist with business development — “that’s the relationship building,” the partnerships, particularly among incubator companies. So the cybersecurity startup can help the robotics startup. It would provide coaching for startup founders who often struggle to run growing companies. And it would help startups raise capital at the right times, which is a common challenge.

That’s why the administrative part is so important, says  Kristof, because when it comes time to raise money, the idea of spending six months getting organized enough for a road show — assembling all the financial data and preparing for due diligence, for example — “devastates most businesses.”