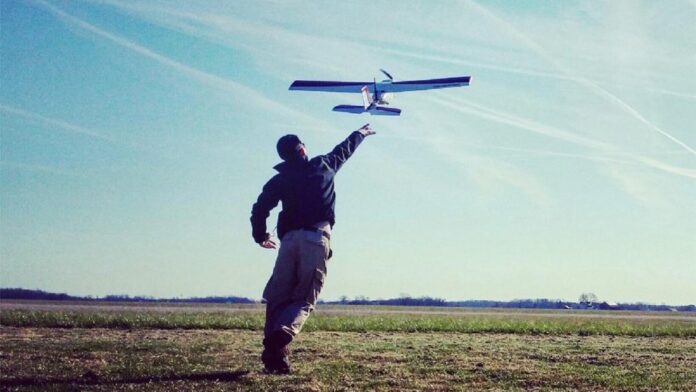 Tucked away in a nondescript office building near the edge of Umstead State Park in Wake County, a drone technology startup is flying high with an updraft of new investment.

PrecisionHawk raised $18 million in April to enhance its signature software program, DataMapper, which gathers and analyzes data from sensors placed on drones. Its primary mission is to help farmers with technology that can pinpoint crop disease and highlight dry areas down to the individual plant.

“We really envision a day when drones are going to be a part of every single farmer’s workflow,” PrecisionHawk spokeswoman Lia Reich says. With the infusion of funds, the firm plans to expand beyond agriculture and into fields such as insurance. “They’re going to be used by every major insurance company to help in the claims process.”

DataMapper will allow information from satellites and piloted aircraft to be compared with data gathered by drones. PrecisionHawk also is launching a drone with improved data collection and safety features. The new batch of investors includes Verizon Ventures, Yamaha Motors and insurance giant USAA, bringing PrecisionHawk’s total funding to $30 million.

The company was founded in 2010 in Toronto, aided by an investment by Bob Young, the Canada-born co-founder of Raleigh-based open source software company Red Hat. Headquarters shifted to Raleigh in 2013, and Young took the helm as chief executive officer last year.

“When we really started thinking about where we wanted to get talent and being in an area we could recruit people to come, Bob had a lot of success here,” Reich says.

PrecisionHawk employs about 50 people in Raleigh, where its software is developed, and more than 100 worldwide, with offices in Buenos Aires, London and Pune, India.

N.C. State University, with its technology and agriculture programs, offers an obvious asset in addition to the Triangle’s other renowned universities.

PrecisionHawk’s software development has taken off despite a ban on most commercial and public use of drones in the United States. The Federal Aviation Administration is hashing out regulations for drone operators, but the agency has granted a number of exemptions to PrecisionHawk. The company also has done work in Canada and overseas where it’s less encumbered by restrictions.

Reich said the FAA’s long-awaited rule for small unpiloted aircraft is due out this year. Operators will not need pilot’s licenses or certificates for drones under 55 pounds, but they will be restricted to daylight hours at altitudes under 500 feet. Once that rule comes out, “the floodgates will open for the whole commercial drone industry,” Reich says.

“We never have considered ourselves a drone company,” she says. “We really focus on the data and data analytics. So when drones start to kind of fill the sky, how are we going to be able to take and manage all of that aerial data and make it useful?”

Farmers stand to be among the biggest benefactors. As the feds work to clear the drone industry for takeoff, the view from PrecisionHawk appears wide open.

Still in the picture

Japan’s Fujifilm adapted to the photography industry’s declining fortunes by diversifying away from cameras and film, a decision that is paying off for the Triangle region. In 2011, the company bought a Merck division that manufactured vaccines, proteins and other products for biotech companies at a Morrisville site. In May, Fujifilm Diosynth Biotechnologies U.S.A. added a three-story, 62,000-square foot building to improve collaboration among its 400 area employees. The amount of investmentin the new building wasn’t disclosed.

While Fujifilm sells to clients across the world, Research Triangle Park is an ideal location because of its cluster of biotech companies and solid labor market, says President Martin Meeson. “We have good access to qualified employees, and the RTP Foundation has done a great job of creating a self-fulfilling business model.” Mitsubishi, another giant Japanese conglomerate, owns a 20% interest in Fujifilm Diosynth. “Japanese companies have long visions, and they have invested to allow us to support our client base,” Meeson says.

Fujifilm’s record is a contrast with rival Eastman Kodak of Rochester, N.Y., which filed for bankruptcy in 2012. After reorganizing, Kodak reported 2015 sales of $1.8 billion. Fujifilm Holdings had revenue of $21.6 billion in its latest fiscal year.  — by David Mildenberg

DURHAM – Quintiles Transnational Holdings will merge with Danbury, Conn.-based IMS Health Holdings, a health care technology company, in an all-stock deal valued at about $9 billion. The combined company will maintain dual headquarters and have about 50,000 employees in 100 countries. Quintiles CEO Tom Pike will become vice chairman.

DURHAM – Aurobindo Pharma will invest $31.7 million in a research and manufacturing facility, creating 275 jobs with an average annual salary of $62,182. The India-based company makes semi-synthetic penicillin and other generic drugs. Aurobindo could receive up to $3.8 million in state incentives.

DURHAM – Duke University President Richard Brodhead will step down in 2017 after 13 years in the position. After a year’s sabbatical, he plans to return to teaching and writing.

DURHAM – BASF plans to lay off as many as 190 workers at its plant-sciences research center. The Germany-based biotechnology company said in 2013 it was investing $33 million in an expansion of the local operations. Affected positions include scientists, managers and field specialists.

RALEIGH – Jim Blaine, 66, will retire after 37 years as CEO of State Employees’ Credit Union. During his tenure, the credit union has grown to become the nation’s second-largest with $33 billion in assets, 5,800 employees and more than 2 million members. SECU plans to name his successor by the first quarter of 2017.

SILER CITY – Mountaire Farms will purchase and renovate the former Townsend poultry-processing plant and plans to create 500 jobs. The Little Rock, Ark.-based company employs about 3,000 people in the state.

RTP – G1 Therapeutics raised $47 million in a financing led by Boston-based Cormorant Asset Management that included existing investors Eshelman Ventures and Hatteras Venture Partners. The company is developing treatments for lung and breast cancer and has raised $93 million since 2012.