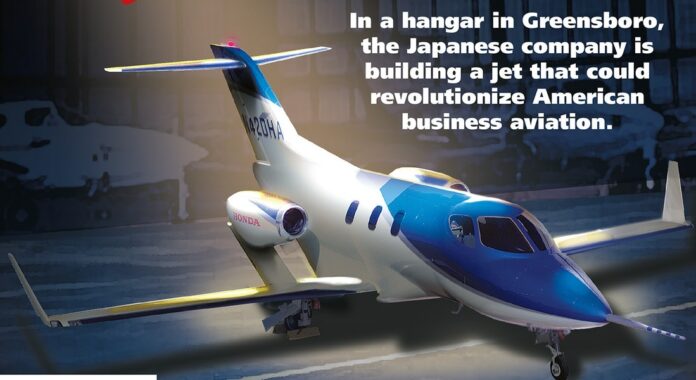 A Honda business jet being built in a secret hangar at Piedmont Triad International Airport in Greensboro? Nonsense, said the spokesman for Honda Americas Inc. “Purely experimental. We have no plans to take it to market.” That was in summer 2004, just weeks after a Business North Carolina reporter accidentally stumbled onto dozens of engineers hovering over an airplane in unmarked, windowless Hangar 6423-B. It was an unusual aircraft, with small jet engines atop its wings like crab eyes on their stalks. Sources, such as the pilot of a film chase plane that had trailed it on its first 40-minute flight about nine months earlier, described how Japanese engineers had worked for years in Greensboro and Mississippi to develop a small, affordable and efficient jet.

Honda now confirms that it began working on the plane in the late 1990s, moved operations to Greensboro in 2000 and created an aircraft division in 2006. Still, in 2004, noted Virginia aerospace consultant Richard Aboulafia gave “less than a 40% chance” the plane would reach production.

Additionally, the plane’s engines are built in Burlington at Honda Aero Inc., a joint venture with a division of GE Aviation, based near Cincinnati. In August, Honda Aero broke ground on a 50,000-square-foot, $21 million expansion that will boost its Burlington manufacturing space to more than 3 acres and add 30 workers, increasing its total employment to more than 120.

As of mid-September, Honda had delivered 14 of the six-passenger jets, which can cruise at 486 mph at 43,000 feet, a spokeswoman says. “It’s the fastest jet in its class, and it’s certified for single-pilot operation.” That means most of the planes have been sold to owners of small- or medium-sized businesses, many of whom are licensed pilots.

Honda’s impact on the Triad is enormous, economic developers say, citing the region’s burgeoning aerospace industry. In August, breaking ground for a $60 million expansion of HAECO Americas, which overhauls commercial jetliners and their interiors, Gov. Pat McCrory noted the industry now consists of more than 180 companies with 9,500 employees statewide. About 5,000 are in Greensboro. The 50 aerospace companies based in the Triad pump about $1 billion annually into the regional economy.

Twelve years after the airplane that would never be? “We’re ramping up now,” says the Honda Aircraft spokeswoman.  “We can do as many as 80 to 100 a month here.”

A new $28 million investment in its recycling center in Reidsville will enable Greensboro-based Unifi to expand production of its REPREVE fabric line and add 87 jobs. Plastic bottles from the eastern U.S. will be processed and chopped into flakes, which are converted to pellets that are spun into yarn. Brands that use REPREVE include The North Face, Patagonia and Levi’s. Automaker Ford uses it in seat coverings — it takes 42 recycled bottles to make one seat for its Fusion hybrid vehicle. Recycled products represent about 35% of sales at the parent company, which had a market value of $490 million in early September. Since launching the brand in 2009, Unifi has recycled more than 4 billion plastic bottles. Unifi employs about 2,700 people worldwide, including 239 in Reidsville. It also has plants in Yadkinville and Madison. Rockingham County won a $500,000 building reuse grant from the state to assist with the project, and Reidsville received an $861,000 community-development block grant to install a larger sewer line.

MEBANE — Prescient, a construction company based in Arvada, Colo., will invest $18.8 million and create 205 jobs in N.C. Commerce Park. The company designs and installs walls, trusses and other structural components. Prescient could receive a state grant of nearly $2 million if it meets hiring and investment goals.

ARCHDALE — Hafele America will invest $5 million in an expansion that will add 100 workers to its 250. The company is the largest subsidiary of Germany-based Hafele Group and makes furniture hardware, closet organizers and other accessories.

HIGH POINT — Ray Gibbs was named executive director of Forward High Point, a downtown development organization. Gibbs has worked for similar groups for 23 years, including eight as president and CEO of Downtown Greensboro.