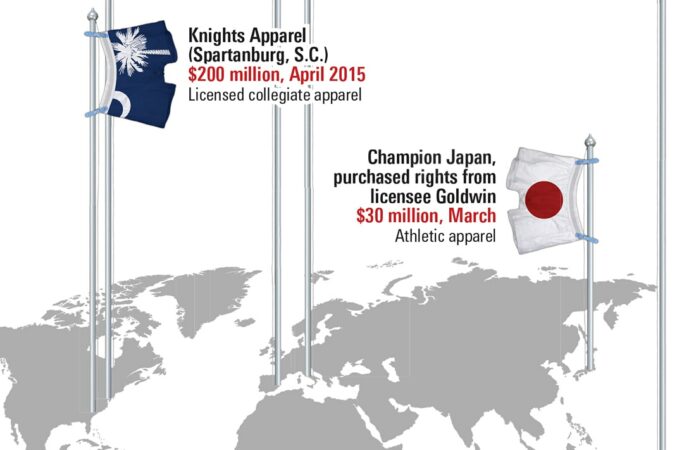 In April, Hanesbrands announced its eighth acquisition in six years and its largest deal ever, an $800 million bid for Aussie underwear and intimate-apparel company Pacific Brands. Pacific owns Bonds, which holds the No. 1 position in men’s, women’s and children’s underwear markets in Australia. “The Bonds brand is akin to the Hanes of Australia,” Chief Operating Officer Gerald Evans said in a conference call, noting the purchase will boost annual revenue by more than $700 million.

Hanesbrands says the acquisition will make it the largest basic apparel company in the world and reflects the Winston-Salem-based manufacturer’s rapid global growth. In 2010, only 11% of Hanesbrands’ revenue came from outside the U.S. With the acquisition of Pacific and a pending $228 million purchase of Italy-based Champion Europe, also announced in April, 30% of revenue will be derived from overseas markets, and the company will hold the No. 1 or 2 market position in 12 countries. Hanesbrands posted record sales of $5.7 billion in 2015.

Pacific is coming out of a restructuring, shedding lines including sporting-goods brands Dunlop and Slazenger and shifting its focus to basic apparel such as underwear, T-shirts and baby clothes. Most of Pacific’s products are made by other companies, while Hanes owns most of its manufacturing sites. The ability to fold production of Pacific’s apparel into existing Hanes plants in Asia sweetened the deal.

Shareholders of Krispy Kreme Doughnuts got an extra-sweet treat when the company said it was being acquired by JAB Holdings, the Netherlands-based investment fund owned by Europe’s billionaire Reimann family. The purchase price of $21 a share, or $1.35 billion, reflected a 25% premium over the previous day’s closing price of $16.86. Shares traded for more than $25 in 2013. Rival Dunkin’ Donuts derives more than half of its revenue from coffee, while sales of doughnuts drive most retail transactions at Krispy Kreme. The company has been trying to brew up a stronger coffee business, introducing a new store prototype with a “coffeehouse” feel. With holdings including Keurig Green Mountain, Peet’s Coffee & Tea and Caribou Coffee, JAB may integrate some of those products into Krispy Kreme’s 1,100 shops in 26 countries. The transaction is expected to close in the third quarter. Krispy Kreme’s headquarters will remain in Winston-Salem, where the first store opened in 1937.

GREENSBORO – ITG Brands will lay off about 375 employees at its cigarette manufacturing plant. ITG acquired the former Lorillard plant last year when Reynolds American bought Lorillard as part of a $27 billion deal. The company agreed to make Newport cigarettes at the plant for a year after the sale.

BURLINGTON – Honda Aero broke ground on a $21 million expansion at its local plant, where the company makes engines for HondaJet light corporate jets, made in Greensboro. The 50,000-square-foot expansion, expected to be complete by early 2017, will create up to 30 jobs. Honda Aero and HondaJet are owned by Tokyo-based Honda Motor.