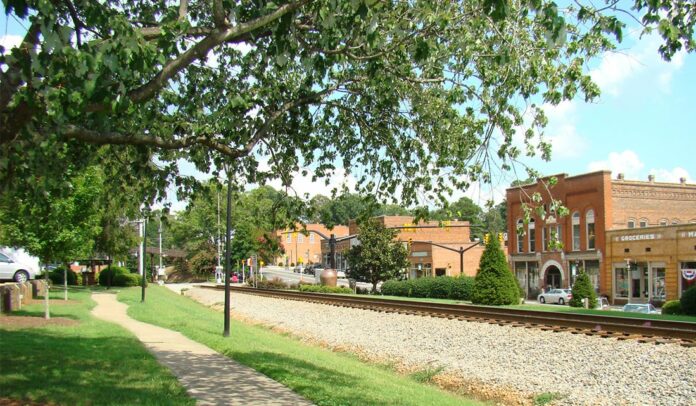 From Waxhaw’s Bike Depot, owner Alan “Teelo” Teeling regularly sees visitors pull out cameras and phones to capture pictures of trains moving against the backdrop of the town’s historic district. “People just sit out there and take photographs,” says Teeling, a native of Dublin, Ireland. “I’ve never been anywhere, except maybe San Francisco or Dublin, where so many photographers come out.”

Trains have been rolling through Waxhaw for more than 125 years. Though locals may sigh about the traffic delays, they know locomotives still create excitement for visitors to the Union County town known for antiques and an eclectic mix of shops and restaurants. But trains aren’t driving change the way they did when the town was incorporated in 1889. Waxhaw’s population growth — more than 500% since 2000 — is now tied to a different mode of transportation: cars driven by commuters. Mayor Steve Maher estimates more than 50% of Waxhaw’s working residents cross the Union County line into Mecklenburg County every day, most headed for Ballantyne (12 miles away) or SouthPark (19) or downtown Charlotte (23). Some head south, crossing the state line two miles east to work in South Carolina.

“The jobs are in Charlotte right now, but residents are tolerant of commuting to Charlotte so they can have the lifestyle here,” says Maher, an IBM retiree and independent consultant who moved to the town 10 years ago. “We’ve been rated the No. 1 best city for young families. We’ve been rated one of the safest communities in North Carolina three years running. People move here for the community, the schools, the events, the concerts in the summer, the Twelve Days of Christmas, the Fourth of July parade. … They want that for their family.”

Jeni Bukolt moved to Waxhaw from Los Angeles after her husband took a job in Lancaster, S.C. “We settled in Waxhaw because of the quaint historic downtown and because of the quality of life,” she says. “I want to raise my children here.” Bukolt, a marketing consultant, is now helping the town modernize its brand.

Teeling says he envisioned downtown Waxhaw’s potential 20 years ago, after he emigrated from Ireland and connected with other area bicyclists. “We would come in packs of riders, and it just always seemed intriguing,” he says. “What would this town lead to? And here we are today. The train’s still coming through, and tons of cyclists. Lots of new businesses coming here. Soon to be a YMCA, and maybe a movie theater down the road.”

Possessing a green card, a coat and one bag when he came to the U.S., Teeling now owns the building housing his shop. “It’s been a journey. Six years of tough business, but I just stuck it out. … You can’t stay stagnant because it will overtake you.”

Gayle Eyre, who opened The Bead Merchants 20 years ago with her husband, is now seeing a second generation of customers buying beads and seeking jewelry and watch repairs. The day before Mother’s Day, a father sat with his children at a table making a beaded masterpiece, his daughter’s gift idea for her mom.

Eyre says downtown Waxhaw is evolving from its reputation as an antiques mecca and is now getting more attention for its artists and restaurants. In January, Charlotte Magazine named Heritage Food & Drink, a farm-to-table restaurant owned by chef Paul Verica, the best in the Charlotte area. Waxhaw’s first brewery, DreamChasers, opened in late May in the old Waxhaw Fire Department.

Nearby, Waxhaw native Mark Hernig is renovating the 1930s-era building that once housed a livery stable owned by his grandfather. When he finishes making updates, the old stable will be the new home for his business, Kick n’ Stitch, which uses antique equipment and methods to make traditional corn brooms. He also will use the refurbished building to put his blacksmithing and woodworking skills to use. “It’s a chance to bring together numerous old trades that will offer useful products that people can buy and use,” he says.

From the door of Hernig’s old livery stable, visitors can see the Waxhaw Tack Exchange, which caters to an area said to have the state’s largest horse population. Four miles east in Mineral Springs, the Charlotte Steeplechase Association annually hosts the region’s version of the Kentucky Derby: Each May, thousands of people attend the Queen’s Cup Steeplechase, started by Bill and Carrington Price in 1995.

While its downtown adds new artists and entrepreneurs, most of Waxhaw’s growth is taking place outside the historic district. The town has nearly quadrupled its footprint since 2000 and now covers about 12 square miles with multiple new housing developments. Some are rooted along roads with few traffic lights or turn lanes. The population exploded from 1,248 residents in 1970 to 14,153 in 2015.

Improving Waxhaw’s traffic is a regional challenge, Mayor Maher says, because the town’s main road runs from Charlotte and passes through the fast-growing Union County towns of Weddington and Marvin. “You realize you’re part of a region, so you really have to have a value system that includes teamwork. We can’t live in our own little silo. We have to work as a team with our neighbors to address the challenges that growth brings.”

More growth is coming. Local officials have approved more than 1,500 lots that had not been platted as of August 2015. Proposed plans call for more than 300 apartments within walking distance of the iconic 1940s water tower overlooking downtown. The historic Rodman-Heath mill, built in 1898 and employing as many as 300 people before closing in 1946, is being renovated to house the Cotton Flats, a development featuring 70 loft-style apartments, 10,000 square feet of office space and a 5,000-square-foot restaurant. Another developer plans The Shoppes at Millview across the street, with space for 10 boutiques.

Jane Duckwall is a Weddington writer. We want to tell your town’s story. Send your ideas to dmildenberg@businessnc.com.