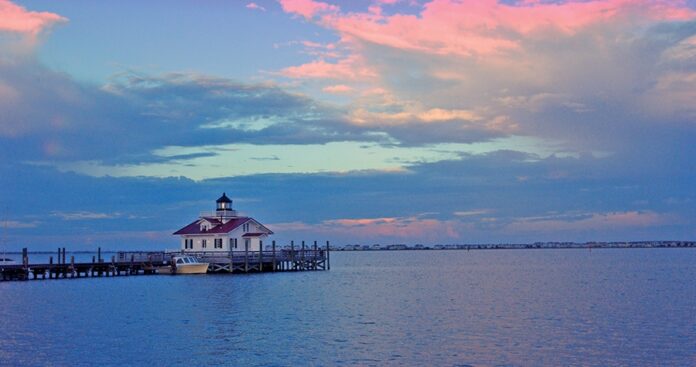 Featured in this month’s TOWN SQUARE: Wanchese. A boat-building and commercial-fishing mecca, Wanchese wades through the pandemic’s turbulent tides.

Wanchese has a definite grit and saltiness about it, less polished than its neighbor on the opposite end of Roanoke Island. Manteo, on the island’s northern flank, is full of ice cream parlors and boutiques and cafes with wine and lattes. Wanchese, on the southern end, is home to trawling supply stores and welding shops and garages with boat hulls in various states of repair. It’s where the whine of belt sanders and power saws mingles with the hum of trawlers and the squawk of gulls. The place smells of dust, fish and seawater.

The town is actually an unincorporated village of 1,600 people who live in ranch-style houses, cottages and mobile homes. Most yards are big and open. Wanchese, named for an Algonquin Indian of the Roanoke tribe, lacks a well-defined downtown. Though it’s built around a small harbor, it has no waterfront promenade inviting an after-dinner stroll. The core of Wanchese is a commercial park, run by the North Carolina Marine Industrial Park Authority.

The road signs still call it the Wanchese Seafood Industrial Park, but seafood is only a small portion of the activity. It’s a 53-acre tract with 30 lots, each filled with tenants since 2003. The park is exclusive to businesses in the maritime industry: boat builders, boat-supply dealers, marinas and charter outfits.

At Outer Banks Marina, Tracy Payne is standing on ground paved with oyster shells, a camouflage sweatband around his tousled gray hair. Right now he has several charter fishing boats and dolphin tours out on the water. “Business has been pretty good,” he says, adding that dolphin tours are “pretty loaded.” In the early days of the coronavirus pandemic, as Dare County closed to visitors, tours hit a wave of cancellations. But when the county reopened in mid-May, the tourists came streaming back. A retired commercial fisherman, Payne has lived all of his 53 years in Wanchese and savors the no-fuss character of the village, its utilitarian ethic.

“I like the old-school fishing,” he says, pointing across the harbor to what’s now an empty lot. “I started right there when I was 9 years old, in one of the fish houses.”

Wanchese is home to fish wholesalers that have long supplied markets across the U.S. and worldwide. But tightening regulations, catch quotas and persistent sand buildup in Oregon Inlet have vexed the area’s commercial fishermen for years, forcing some to pull up anchor. A venerable fish house is Willie R. Etheridge Seafood, founded in the early 1930s. Its manager, Mark Vrablic, is a familiar voice in the rallying cry against what he deems burdensome regulations, and he feared COVID-19 would only batter the industry more. “I was in big-time panic,” he says. In March, as the pandemic began in earnest, restaurants closed, and demand for certain species hit bottom. He says flounder and snow crabs, popular restaurant staples, were “punished.”

By late May, as many N.C. restaurants reopened to half-capacity seating, sales improved, but the market is still struggling. “You take 200 restaurants in Dare County and you cut their capacity by 50%, that’s a lot of popcorn shrimp that’s not getting fried tonight,” he says after unloading two boats of shrimp at his dock. He notes in July, the height of tourist season, that a local restaurant was seating 500 people a night, compared with about 1,700 a year ago. But there is a flip side to this fish tale: The retail seafood business has been jumping at “Harris Teeter and little mom-and-pops — they’ve had the best of their life, as good as any time.”

At O’Neal’s Sea Harvest, 1,500 pounds of shrimp just arrived at the dock, and a tuna boat is due later in the day. On a wet concrete floor, men in orange rubber waders stuff Spanish mackerel in boxes labeled “Fresh Seafood” and stack them on pallets. They pour another glimmering catch onto the scales for weighing. Women stand around a table, removing the heads from mounds of shrimp.

Benny O’Neal, who’s “pushing 76 real hard,” gave up commercial fishing in 1995 to open this processing facility and eventually start a restaurant. His menu reels in the crowds with grouper, snapper, tuna, wahoo and swordfish. Like all restaurants, it floundered during the shutdown, though retail business has been strong. “More people were buying and taking it to their cottages and cooking,” he says while sitting on the front deck of his restaurant as lunch patrons amble in. “When they opened Dare County back up for folks to come in, we were busier in our retail than we’ve ever been any summer. July was exceptionally busy.” His restaurant was down about 500 plates that month, but “the retail compensated for the loss.”

Both fish houses hit headwinds in wholesale markets, especially when shipping fish to the Northeast. As New York City became a coronavirus hot zone in the spring, it had a chilling effect on seafood markets across the region. “If [wholesale markets] were going to take a thousand pounds of fish several times a week, they might have cut that back to 200 pounds of fish because most of our stuff goes to Philly, New York and Boston,” O’Neal says.

Bob Peele, director of the N.C. Marine Industrial Authority, says the hardest blow to the commercial fishing industry came when out-of-state markets went on lockdown. “The places we ship our seafood closed,” he says. With the easing of COVID-19 restrictions, local catches are again bound for distant cities as restaurants promote “catch of the day” offerings.

The pandemic has been smooth sailing for the other big business in Wanchese: custom boat building. The village has a dozen or so boatmakers and mechanics, most clustered in the industrial park. Their handiwork includes sporty, custom-made vessels with tuna towers and million-dollar yachts with owners as far away as Hawaii and Dubai.

At Blackwell Boatworks, proprietor Craig Blackwell says, “COVID stepped in, and our work went through the roof. We’ve got more work than we can shake a stick at.” He and his sons build boats from scratch, but repairs have really gone full throttle. “Everybody wanted to get their boat repaired,” he says. “They thought this was a great time to repair a boat.”

Blackwell learned the craft of building boats as a teenager in his native Michigan before moving to Florida. But he had a young family, and the Sunshine State had lost its allure, so in the mid-1980s, he sought out a more rustic coastal lifestyle. Wanchese fit the bill. He founded Blackwell Boatworks in 1986 as a family affair: His wife, Sandy, manages the finances. His sons, Jeff and Jason, along with his son-in-law, Bow, work on boats and handle the day-to-day.

The 2007-09 recession pounded the custom-boat business, but the pandemic has sent in a raft of orders. “We were slam-packed during all of it,” says Blackwell’s son Jeff. “A lot of our clientele [doesn’t] have to worry about money, which is good. They’ll bring us the boat and say, ‘Well, I can’t use the boat right now, so why don’t you guys do a bunch of work on it?”

Boats made here in Wanchese and elsewhere along the North Carolina coast are a prized catch, their craftsmanship admired around the world. At Briggs Boatworks, Jeffrey Desilva watches as workers put the finishing touches on his white sport-fishing boat that he’ll drive back home to Bermuda, a 30-hour voyage. He brought it to Wanchese for structural and varnishing work. He and his father had three boats built at Briggs. He calls Briggs’ owner, Sunny Briggs, a legend who “does amazing work.”

Boat builders bolster other trades, such as upholstery, cabinetry and carpentry work. “A lot of what you see in here is support business,” says Peele, the industrial park director. “We’re not mass producing anything back here. It’s all craftsmanship.”

Opened in 1981, Wanchese Marine Industrial Park initially billed itself as a seafood venue, but Peele says the park was slow to attract tenants. In the 1990s, when the state expanded its definition of eligible tenants to include any marine-related enterprise, things revved up. The first boat builder arrived in 1996. The largest builder for many years was Davis Boatworks, which the late Buddy Davis started in 1973. It no longer operates in Wanchese.

It’s gritty work to make boats shine, and it’s grimy work to unload, weigh in and box up fish. Wanchese shuns the tourist sheen of its neighboring coastal communities; the palatial beach houses across Roanoke Sound might as well be an ocean away. With his windblown hair and two-day growth of beard, Tracy Payne looks across the harbor and gives an unvarnished assessment on his lifelong home. “I enjoy seeing the sun come up in the morning, the birds, the dolphins,” he says. “I like everything simple.” ■