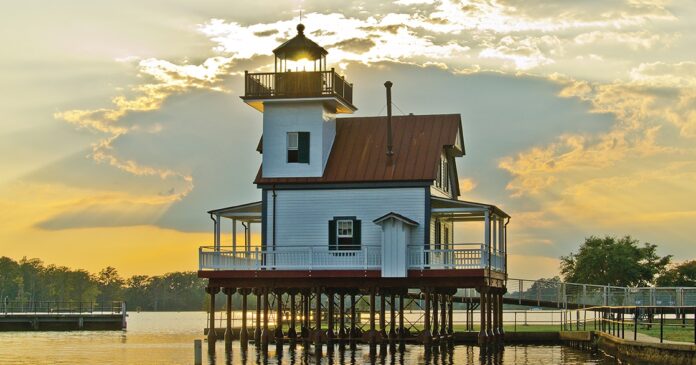 Edenton may be the little town that time remembered. Tucked off Albemarle Sound near the mouth of the Chowan River, due west from Kitty Hawk, the remoteness that made this waterfront town an attractive settlement in the 18th century has made it just as easy to bypass ever since. The colonial capital of North Carolina from 1722 to 1743, Edenton was a protected, bustling port until a hurricane closed Roanoke Inlet in 1795. The Dismal Swamp Canal took trade to the north, and the railroads didn’t come its way. Buildings of its heyday could have become fossils, but the town chose to retain some of its heritage. Its population, now about 5,000, has barely budged over the past 45 years, with more retirees and fewer textile-mill workers.

“Edenton is still undiscovered. It’s unspoiled. People have rallied together over decades to preserve what’s here,” says Samuel Bobbitt “Sambo” Dixon, a lawyer who practices in the same office of his grandfather, Richard Dillard Dixon, one of the judges at the Nuremberg trials. “It’s the most historic place in North Carolina.” The N.C. State Supreme Court still meets for rare, essentially ceremonial occasions at the Chowan County Courthouse, built in 1767. Dixon lives and keeps his law office in Beverly Hall, a house owned by his family for 200 years. When the town’s 1900-vintage mill’s last owner, Greensboro-based Unifi Inc., closed the plant in 1995 and donated it to Preservation North Carolina, it was then redeveloped into condominiums, while 50 small houses where mill workers once lived also were refurbished. “We were able to preserve the whole thing,” says Dixon, who is a director of the National Trust Council, a philanthropic arm of the National Trust for Historic Preservation. “If anything, Edenton has retained its character.”

Roland Vaughan, 72, has been mayor of Edenton for 20 years. He recently sold his jewelry store and now runs the town from the inside pocket of his coat. Most mornings he can be found at the Edenton Coffee Shop, the town’s “font of all knowledge,” he says. “The biggest thing we’ve done is to save the businesses that are here, for the most part, and help them with expansion.”

Agriculture is still the largest industry. During the fall harvest season, the smell of roasting peanuts from Jimbo’s Jumbos hangs like an aromatic fog over the town. The boating industry is slowly recovering from the last recession. “I tell people that the boat-building industry didn’t slow down, it quit,” says Vaughan. Edenton’s three boatmakers — Albemarle Boats, Carolina Classic and Regulator Marine — “were all born in this community. They went through a terrible time during the recession but are having a strong recovery at the moment.” At its peak in the 2000s, the town was turning out 600 boats a year.

While agriculture remains the biggest business, tourism isn’t far behind with an $18 million annual impact. Edenton sells quaint the way Memphis sells the blues. The 1886 lighthouse that was positioned at the mouth of the Roanoke River is a photographer’s favorite. St. Paul’s Episcopal Church dates to 1701, and the 1758 Cupola House was one of North Carolina’s first efforts at historic preservation. Though Edenton has four bed-and-breakfasts, the town offers fewer than 200 available rooms. That may change next year as Kill Devil Hills-based Saga Construction and Development plans a 60-room project in the former Hotel Hinton. The redevelopment became more feasible after the N.C. General Assembly reauthorized tax credits for historic properties this year.

“We were lucky to have that passed. [Elimination of credits] would have completely stopped several of our projects,” Dixon says. “We’ve done so many tax-credit projects here, I mean, we just have them lined up like jets on a runway. They’ve improved the lives for everybody.”

Shirley Flynn and her husband Barry retired to Edenton from Batavia, N.Y., in 2009. They bought property in 2000, then waited a few years to build. “It felt like home,” she says, while taking a break as a volunteer greeter at the 233-year-old Barker House. Other newcomers have made the town a more interesting place, Dixon says. “They have been instrumental in reminding us what is so incredibly great about living in a small place like Edenton. It’s stunningly beautiful.”