On a cold, quiet Tuesday night, on the mostly empty roads of downtown Louisburg, the red “open” sign in a window on Nash Street radiates like a guiding light. The sign hangs over the sidewalk, announcing a “Bar and Social Club” called Tonic and at this late hour, it’s drained of people, save for the bartender and cook.

“Tuesdays are our slow night, but we have good crowds during the weekend,” says 50-year-old bartender and owner Bill Opal. His cook, Steve Frazier, is readying one of the bar’s signature turkey bistro sandwiches. The bar opened last summer — “right in the middle of COVID,” Opal says — and is gaining a loyal clientele. The pandemic has claimed a handful of downtown businesses, including a Mexican restaurant, a gift shop and an art gallery. “It has been tough sledding, but we’re doing OK.”

Opal and his wife, Kathy, opened the original Tonic in their hometown of Wake Forest in 2017 and decided to open a second bar in nearby Louisburg, a much smaller town of nearly 3,600.

Louisburg, the seat of Franklin County, sidles up to the Tar River about 30 miles northeast of downtown Raleigh. The brick courthouse with white Doric columns stands as a focal point of town, whose welcome sign proclaims “Charming Since 1779.” The Louisburg Historic District, filled with homes dating from the early 1800s to the 1920s, exudes charm and nostalgia. But downtown Louisburg is still short on after-hours gathering places, something that enticed Opal to bring a little vigor in the form of a second Tonic location.

“This particular building caught our eye,” he says. “We like being in a historic downtown area. There are all these great downtowns that have all this character and not a lot of business.”

Tonic occupies a building dating back to the early 1900s that housed the H.C. Taylor Furniture Warehouse for decades. It sat vacant for about 15 years until local auto-repair chain owner Keith Smith and electrical contractor Glenn Swanson bought it and began recruiting tenants. After a major renovation, the Taylor Furniture family presented Opal with a sign from the original furniture store that pledges “Furniture at Discount Prices.” 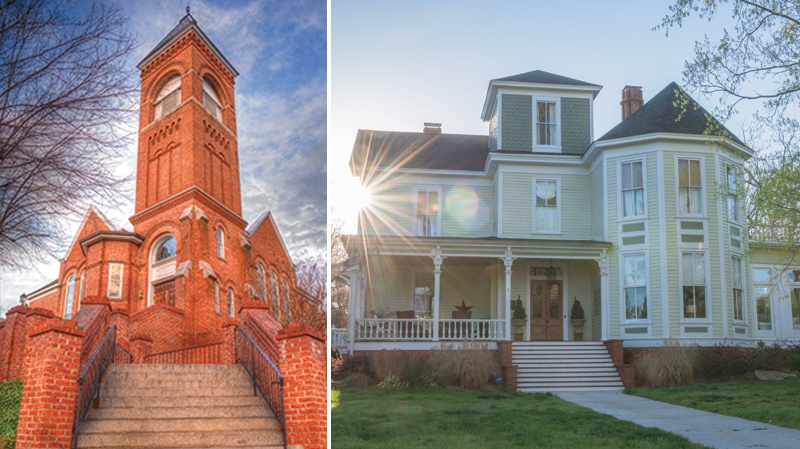 Louisburg has a historic district benefiting a town dating to the 19th century. The Nicholson-Bickett-Taylor House, right, was built in 1897, while the Louisburg Baptist Church held its first service in 1901.

Louisburg has gone on a sprucing-up streak for the last five years, setting the table for new businesses to set up shop.

The town’s 34-year-old administrator, Jonathan Franklin, says nearly every building in downtown has found a new owner or undergone a makeover. “You had folks who really just didn’t have the want or ability to improve their property,” he says. Earlier this year, his wife, Lauren, opened a stylish dress shop for women called Audrey Hazel Boutique in the same building as Tonic. “Now you have this beautiful building with two great spaces,” he says. “I think we have really set a great foundation and a framework for what will be a bustling downtown in the next 10 years.”

Franklin grew up in Climax, near Greensboro, and his wife is from Concord. He says they’re both enamored with the small-town life. He took the position in Louisburg when he was 29, marking quite the contrast with Mayor Karl Pernell, who is 85.

A lifelong resident of Louisburg, Pernell has been mayor for nearly two decades. He welcomes the infusion of new blood and fresh ideas. Its population barely budged in the second half of the 20th century but is picking up steam as Raleigh sprawls north.

“We’ve had more houses built in Louisburg in the last 18 months than we’ve had in the last five or six years,” Pernell says. “We’ve had folks who moved here, I would say in the last year, saying they’re trying to find something out of the hustle and bustle.”

Locals expect growth to accelerate when U.S. 401 is widened to four lanes all the way to Raleigh. Part of the expanded road that is 7 miles south of town is slated to open next year, but the final stretch isn’t planned for about a decade

Pernell applauds the town’s efforts to encourage property owners to beautify their buildings. “If it costs $2,000 to paint the front of your building, we’ll pay $500 of it,” he says. “People jump on it when normally they wouldn’t do anything.”

More concepts are filling these fixed-up facades. At 118 N. Main St., building owner Ron Cox, who grew up down the road in Rolesville, plans to open a boutique hotel with six or seven rooms on the second floor and a few shops at street level. COVID-19 has delayed the project, but he hopes to get the infrastructure in place “as soon as we can.”

In 1999, Cox and a partner bought a rundown downtown structure because he couldn’t stand to see it in such terrible shape. “Nobody seemed to be doing anything about it,” he says. “It should have been condemned. We bought it, fixed it up, and I just got the fever. So we bought another building.”

People thought he was crazy. They laughed at him for harboring the notion that anything viable would come from the crumbling shells. “After the second building, nobody was laughing,” he says. “They still thought we were crazy, but they weren’t laughing because we were at last showing that it could be done and were starting to fill these spaces up.”

The tenants were offices — not shops and restaurants, but law firms and bail-bonding companies with court-related businesses. “We were stuck in being an 8-to-5 town,” Cox says. To change that, he had the idea of opening a brewery on Main Street, something he calls “a midlife crisis hobby.” Before Tar Banks Brewing opened its doors in May 2017, he says downtown Louisburg had no place to grab a beer or sip a cocktail. “We wanted to be a catalyst,” he says. “We decided to take a stab at it, assuming that if we did, we’d get other restaurants and places to come. And that started happening a little bit.” The brewery, open Thursday through Sunday, creates its own ales and hard seltzers while also serving beers from other microbreweries.

One of Louisburg’s most talked-about (and long-awaited) undertakings is the Depot Hill project. The town is transforming the old railroad station on South Main Street into a 16,000-square-foot event center, complete with a commercial kitchen and meeting rooms. Construction is set to start early this year.

“We hope to have that open in the next few years,” Franklin says. “We’re a little short on funding, as most government projects are in small towns.” But the $1.5 million project is already sparking other entrepreneurial ventures. Across from the town hall, Sean and Christine Kingsley are refurbishing another once-neglected building, where they run a candle-making business called Tar River Candle. In that same building, they’re embarking on the town’s first multiuse project, which will include a market, retail space and two residential units upstairs. “A town project is doing its purpose,” Franklin says. “It’s bringing people to Louisburg and creating ancillary businesses around it.” 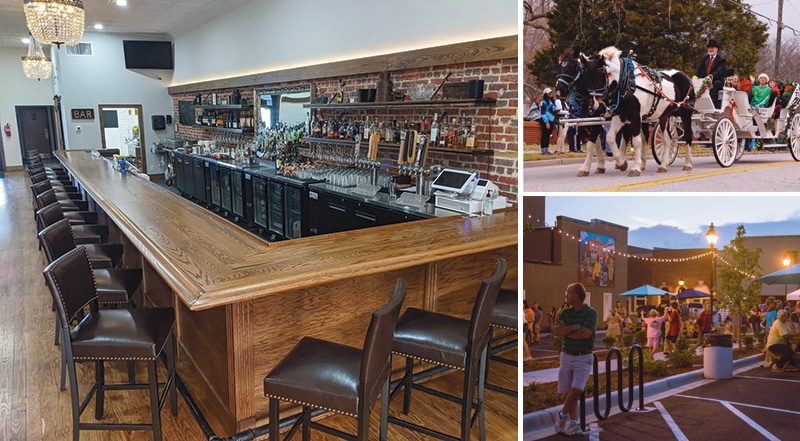 Bar and social club Tonic is among new businesses helping to grow Louisburg’s lively downtown scene, which was boosted by community events prior to COVID-19 restrictions.

In the late 1770s, the General Assembly chartered the town as the seat of the newly formed Franklin County, named for Benjamin Franklin. The American Revolution was still raging at the time, and the town founders chose the name Louisburg to honor America’s ally, King Louis XVI of France. Given its spot on the Tar River and on a post road, the town attracted settlers and shopkeepers.

In 1787, the town commons was designated for a school called the Franklin Male Academy, though it wouldn’t have its first class until 1805. A few years later, the state chartered another school — the Louisburg Female Academy — on the property. The schools eventually merged and became what is now Louisburg College, a private school affiliated with the United Methodist Church. It enrolls about 600 students and is the only two-year residential college in North Carolina.

The intimate, oak-shaded campus bolsters the town’s charm quotient, but Louisburg also boasts an industrial component. In April 2020, the N.C. Department of Commerce awarded a $2.4 million grant to help the town pay for water, sewer and electric service at the Louisburg Industrial Park. The site is home to Advance Metal Processing, which removes paint and other contaminants from metals so they can be reused. Novozymes, a Danish biotechnology company with its North American headquarters in nearby Franklinton, has a warehouse in the park. Just south of town is the Triangle North Executive Airport, which has undergone millions of dollars in improvements in recent years.

As for ground transportation, U.S. 401 is Louisburg’s main artery to the Triangle. Skirting downtown, it’s lined with fast-food restaurants, big-box stores, strip malls and gas stations. But local boosters and entrepreneurs know the future of Louisburg isn’t on the bypass: It’s in reviving the town’s downtown.

On a cold, rainy weekday morning, steam rises from the lattes and espressos at the Blue Collie Coffee Shop, next door to Tar Banks Brewing. It’s a cozy, lively place. Blue Collie opened in May 2017 as a program of the Z.B. Collie Foundation, a nonprofit that provides work for students and young adults who have intellectual and developmental disabilities.

“It was a leap of faith on my part,” says owner and founder Paige Sayles. “I have no business knowledge whatsoever.” But the community has given her a shot of confidence, bringing that convivial character downtown Louisburg is poised to cultivate. “We have a great cohort of regulars,” she says.

It has scaled back hours of operation because of the pandemic to Thursday through Sunday.

Like an “open” sign glowing in a window, downtown Louisburg is a beacon for opportunity seekers and creative types to come and fill the empty spaces. Buildings once dead and decaying are now a grand canvas, just waiting for a burst of energy. ■ 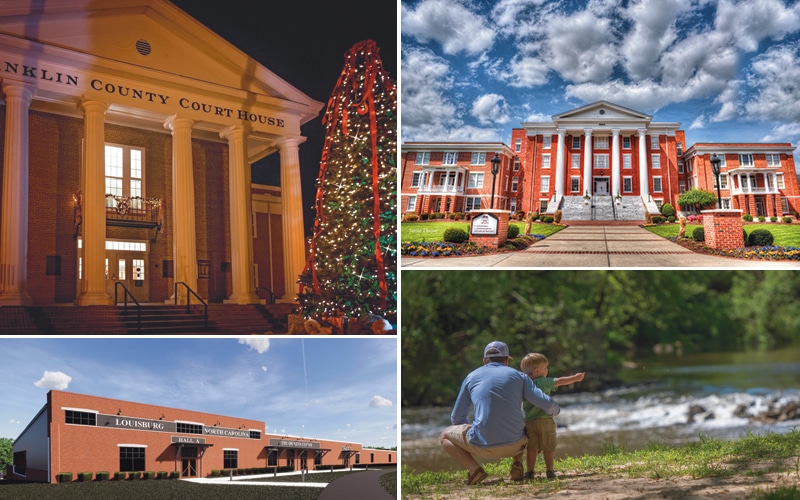