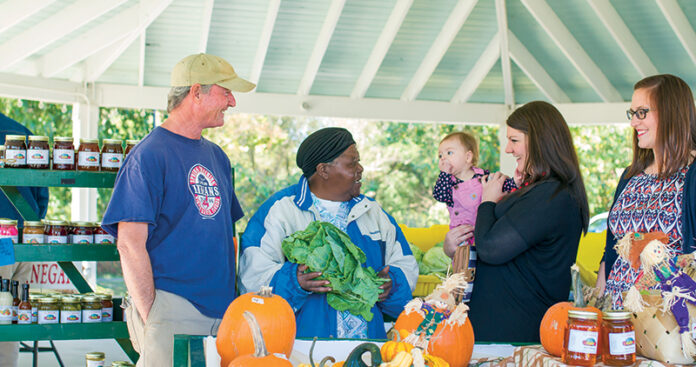 A successful downtown rebirth was hit hard by the pandemic. Leaders expect a solid rebound.

Kinston has soul and funk, fine cigars and beer, Chef & the Farmer, basketball greats, murals of James Brown and okra. It has sushi eaters and axe throwers, historic houses with rainbow colors and white picket fences. And now it has a Starbucks.

The green giant of dark roasts whipped up a venti-sized buzz last summer, just as many eateries and watering holes had ground to a halt in the pandemic. Cars wrapped around the building on opening day by 5:30 a.m. Mayor Don Hardy, who posted pictures of the line on his Facebook page, views the starred crown logo on Kinston’s outskirts as another jewel in the city’s crown.

“We’re slowly trying to get back to where we were or better,” says the 39-year-old mayor, reflecting on a virus-vexed year. “I think we’re in a better position than some other folks throughout our state.”

He’s quick to run through other corporate names with a presence — and a payroll — in the area. DuPont has had a plant northeast of Kinston for nearly 70 years and now produces the Sorona polymer used in clothing, carpet and other fabrics.

The 2,500-acre North Carolina Global TransPark has a cluster of aerospace and logistics companies. Aircraft Solutions USA is building a $100 million plant to recycle aircraft parts and other materials, bringing about 475 jobs. It’s set to open by June 30.

COVID-19, for all its disruptions, has had some positive side effects. The virus gave Kinston a shot in the arm with West Pharmaceutical Services launching a $19 million expansion. The company manufactures rubber components, such as vial stoppers and syringe plungers, for vaccines and treatments. The project will add 90 jobs to its existing staff of 425.

“We’re in a good position to move forward, to become a thriving city in the east, to be a leader,” Hardy says.

Hardy grew up in this city of about 20,000 that serves as the seat of Lenoir County. It’s an on-the-way-to-the-beach stopover along U.S. 70, roughly halfway between Raleigh and the Crystal Coast. But in the past decade, it has become a destination unto itself. Foodies from across the country have made pilgrimages to Kinston for a seat at Chef & the Farmer, the restaurant popular chef Vivian Howard and her husband, Ben Knight, opened on West Gordon Street. It hurtled to fame when Howard, who grew up on a farm outside town, became host of the award-winning PBS series A Chef’s Life​.

“Naive but determined,” she writes on her website, “I opened Chef & the Farmer in 2006 with the hope that our restaurant might light a spark in our little town and help transition some of eastern Carolina’s displaced tobacco farmers into food farmers.”

Howard, 43, brings a modern rendition to classic Southern dishes, with more than 60% of her ingredients raised within a 90-mile radius of Kinston. The restaurant closed for several months during the pandemic and is now open for dinner on Wednesday through Saturday.

Shin also owns restaurants in Goldsboro, Greenville and Mount Olive and makes his presence known in town by his white Lamborghini. ​Stephen Hill, the founder of Mother Earth Brewing, Kinston’s renowned beer maker, leases him space. “I called him up and said, ‘I have space, will you come?’ He took it right away, and it’s doing gangbusters.”

As for Mother Earth, it gave birth to Kinston’s craft beer aficionados in 2008, two years after Chef & the Farmer set down roots. Hill, a 59-year-old scion of a wealthy family, and his son-in-law, Trent Mooring, moved into a renovated brick building that dominates the corner of Heritage and North streets. As the name suggests, Mother Earth is big on the environment: A rooftop solar array powers the taproom, and the insulation is made from recycled blue jeans. It was the first U.S. brewery to earn a Leadership in Energy and Environmental Design Gold certification.

​In recent years, Hill has enlarged his organization in Kinston with the opening of a distillery, Mother Earth Spirits, and the Mother Earth Motor Lodge, a groovily refurbished two-story motel. It features 21st-century comforts with 1960s decor. A classic midcentury sign, featuring an arrow studded with lights, still stands.

But a modern crisis has kept the parking lot less than full. “COVID has hurt a lot, but that’s statewide. COVID is just a bad word,” he says. Bookings have dipped at his other hotel, The O’Neil, a seven-room luxury inn located inside the former Farmers & Merchants Bank, built in 1924. He says the pandemic guzzled 20% to 25% of business at the brewery taproom, while beer sales across the state have increased. “We’re all very hopeful that when this goes away, Kinston will shine again,” he says.

In the pre-pandemic days, Scot Elden, owner of a gift shop and food-service venue called Upstairs at the Market, says the crowds from across the nation would descend on Kinston. “During the summer, there was just all kinds of foot traffic. I mean it was just incredible,” he says. “And you knew why they were here: They were spending the night at Mother Earth Lodge and they were eating at Chef & the Farmer.”

Chef & the Farmer and Mother Earth cultivated a rebirth in downtown Kinston. Across several blocks west of Queen Street, you can get stir-fry at Laughing Owl Restaurant, calzones at Sugar Hill Pizzeria, fried pickles at Mad Hatter, pecan-smoked pork at Whiskey Pig Craft Butchery and Deli, and you can hurl axes at Ironclad Axe Throwing Co. Shawn Stengele, 42, and his wife, Audrey, opened the venue — which also offers beer, wine and arcade games — on July 1, despite the pandemic. “We managed to pay our bills,” Stengele says, “and were able to create five jobs.”

The Stengeles also have an axe-throwing business in New Bern. “We fell in love with the [Kinston] building,” he says. “It’s right here in the heart of downtown. If you’re coming to Kinston, this is where you’re coming.”

Queen Street was long known as The Magic Mile, where tobacco warehouses loomed large and people came from across eastern North Carolina to shop and eat. Those spacious warehouses didn’t just echo with the tobacco auctioneer’s voice; they hit the notes as music and dance halls. They were popular stops for jazz bands in the ’30s, ’40s and ’50s. As the Big Band era faded to the Doo-Wop age, the likes of Chubby Checker, Fats Domino, Ray Charles and James Brown put on shows where heaps of tobacco took center stage in late summer.

Kinston, bounded on the south by the cypress-lined Neuse River and surrounded by flat farm country, has the feel of a Mississippi Delta town. At the corner of South Queen and Springhill streets, a colorful mural is splashed on a brick wall: “Celebrating Our African American Music Heritage.” Across the street and cozying up to the river lies Kinston Music Park, with its interpretive signs about the area’s virtuosos. The “Godfather of Soul” himself, James Brown, hired several musicians from Kinston to join his band. One of them, Nathaniel “Nat” Jones, was the band director.

Kinston is a city whose atmosphere is humid with music history and tobacco heritage. Now it has a humidor that would make any cigar aficionado light up. Manhattan Cigar Lounge opened Nov. 14 on Queen Street. “It was intentional,” says owner Nicholas Harvey, 42, who’s also Lenoir County’s assistant superintendent of schools. “I wanted to open in 2020 so I can look back years and years from now and say something cool came out of 2020. It’s to go along with the breweries and the downtown eateries.”

The lounge has leather sofas, chessboards, flat-screen TVs and walls decorated with pictures of well-known Kinston athletes. This city has got game. It’s home to eight players who were either drafted or played in the NBA. Cedric Maxwell, Charles Shackleford, Jerry Stackhouse, Reggie Bullock and Brandon Ingram are among the local basketball phenoms who made it big.

Kinston is like that: Young people pursue their passion and take on the world, only to discover that they can go home again and pursue their happiness. At Jay’s 108, Travis Harper, 28, is tending bar. He has a bushy, reddish brown beard juxtaposed by a neatly parted haircut. He grew up outside town, and his footloose ways had him traveling the world throughout his 20s.

Now he’s returned to Kinston with plans to open a “little hole-in-the-wall” downtown saloon in May. He’ll never fully suppress his wanderlust, but he’s ready to settle down in a town that keeps upping its cool quotient. “I want to be a part of it,” he says. “We do need some young people coming in with new ideas and new things.”

A school administrator selling cigars. Families throwing axes. A Lamborghini-driving sushi connoisseur. Top it off with a white chocolate mocha from Starbucks, and you’ll get a taste of this eclectic community called Kinston. ■