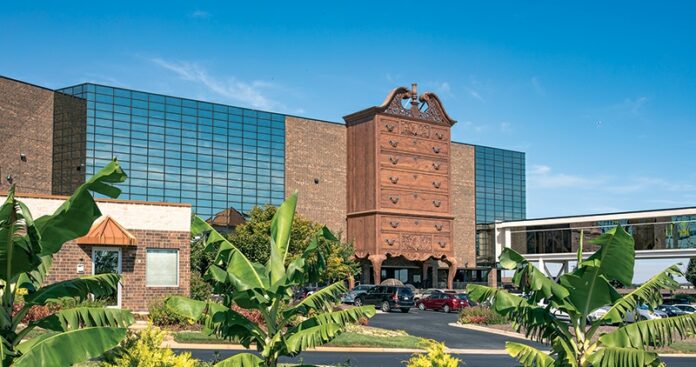 A mining town in the early 1800s, Jamestown’s central location between Greensboro and High Point and developing downtown make it an increasingly popular locale.

The old farmhouse with the sunny yellow paint job, bookended by a pair of chimneys, has shabby shutters and scruffy floors that creak. But like the ripped women’s jeans hanging from a rack upstairs, this house has style and character, serving as a home-furnishings gallery, a coffee shop and a women’s clothing store. Steven Beck, whose daily ensemble is often Carhartt suspenders and a trucker hat, opened Black Dog Home & Cafe in 2019. “When I was younger, I always wanted to open some kind of store here in Jamestown,” he says.

He grew up in the area learning the art of woodworking from his grandfather. These days, the 32-year-old restores weathered wood into furniture, selling it at Black Dog, which is named after family dogs Hank and Scout. Lines of wood grain course like veins across tabletops, swirling around knots and creating tan-and-brown patterns that pop. Beck knew from an early age that he would craft a livelihood from working with wood. “I honestly think a lot of it has to do with working with my hands,” he says. “I love being able to look at a completed art form.”

That woodworking streak runs through the Piedmont hills like the Deep River along whose banks Jamestown is built. Just across the river is High Point, renowned for its furniture makers and twice-yearly market that is the largest home-furnishings trade show in the world. The Mendenhall family started the first lumber mills in Jamestown in the late 1700s, but the town, unlike its larger neighbor, wouldn’t claim fame through furniture. It became better known for its yarn spinning, gunsmithing and gold mining and for what went on in the basement of the old yellow house.

“The basement’s a little eerie, I’ll be honest,” Beck says. It’s where Dr. Shubal Coffin treated sick and wounded Confederate soldiers during the Civil War. Dr. Coffin established a medical school in Jamestown in 1840, one of the earliest in North Carolina. He built the house in 1855 overlooking the railroad “to enjoy the improved access and visibility afforded by train travel,” the historical marker says. In the war, maimed soldiers would be offloaded from trains and carried into Dr. Coffin’s home.

“I tell you what, if those walls could talk down in that basement, there is no telling what kind of operations went on back in the day,” says Will Ragsdale, a former town council member. He owns the house and several other properties in the town of about 4,100 people. Jamestown spreads across 3 square miles from High Point Lake on the west to Guilford Technical Community College on the east.

“We have a lot of interesting dots of history.” He says connecting and highlighting all those dots will put Jamestown on the map. “I like to call it the ‘Jewel of the Triad’ because it’s right smack dab in the middle of everything.” 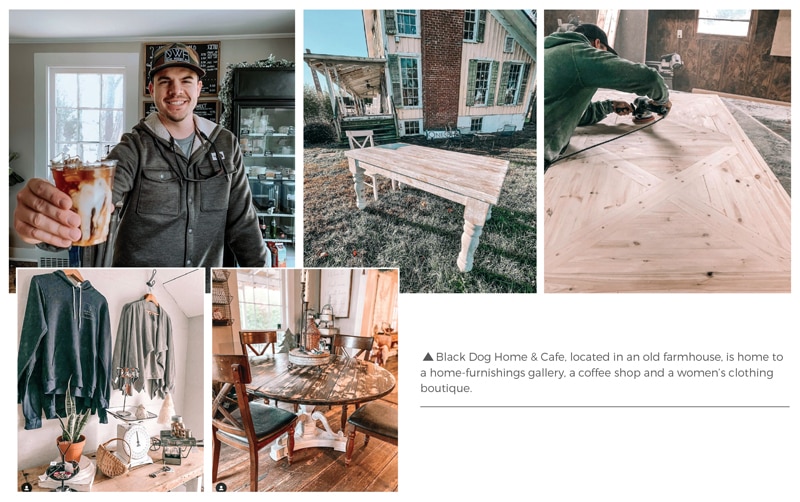 Jamestown’s settlers, who arrived in the mid-1700s, were Quaker families who drifted south from Pennsylvania in search of good farmland and timber. James Mendenhall came along and built a plantation, then moved to Georgia a decade later. His son, George, stayed behind and named the village for his father.

In the early 1800s, gold was discovered near Jamestown, leading to several prosperous mines. But along came the California Gold Rush, and the local mines were abandoned. Through much of the 19th century, it was black powder that burnished Jamestown’s reputation. The town became known for craftsmen who built what came to be known as the Jamestown Rifle. In a booklet titled The Gunmakers of Jamestown, North Carolina, the writer describes the “slender, graceful, muzzle-loading rifles which, although made by many different individuals, share certain characteristics which constitute the Jamestown Rifle.” It’s now prized among antique firearms collectors.

Paying homage to Jamestown’s gunsmiths, a barbecue restaurant on Main Street bears the name Black Powder Smokehouse. It opened in November 2019 inside an old filling station, Hughes Oil Service, a town staple since 1919. After the station closed in the 1990s, the brick building sat idle for years until Ragsdale partnered with Keith Henning, a longtime chef, to renovate and expand it into a barbecue place. It still looks like the quintessential filling station, with its front canopy supported by two brick stanchions and refurbished ’70s-era gas pumps. Henning, 47, worked more than 20 years as an executive chef. Now he runs his own place in a town he loves.

“Jamestown for us was great,” he says, branding the town as a “date-night location.” The small downtown also boasts a gourmet restaurant called Southern Roots, a live music venue called The Deck, and the Full Moon Oyster Bar, all of which have opened in the past dozen years. “But,” he says, “it seemed like we were missing that family place where you can bring your kids after a soccer game and not worry about them running around in uniforms and cleats.”

The Black Powder logo includes the words “Artisan Barbecue,” which Henning acknowledges might come across as sounding “hoity-toity.” But he says cooking barbecue the time-honored way is a cherished craft. His pork (chopped or pulled), brisket, chicken and turkey are cooked slowly with the essential ingredient: smoke. “We just focus on fresh ingredients,” he says. “Not trying to cook as much barbecue as we can but trying to do it right in smaller amounts.”

Henning, who grew up in Indiana and married a Southerner, serves up those savored regional staples: mac and cheese, collard greens and sweet potatoes. Barbecue speaks to him “because it’s the most archaic form of cooking,” he says. “It’s pretty much wood, fire and meat.”

Artisan is an apt word to describe the restaurateurs and other entrepreneurs along Main Street. In 2009, Lisa Hawley moved her Southern Roots eatery from High Point to Jamestown. She has helped make the town a destination, wooing fans with her shrimp and grits, stuffed rainbow trout, and flat-iron steak.

Across the street, people stop to smell products at the Soap Lady Store, where owner Susan Stringer and her staff make everything from goat’s milk bar soap to sugar scrubs. And there’s the Ivy House Salon. Nikki Kepley, 32, opened it in 2020, bringing a dash of urban flair to the town where she grew up. “I love being part of this small-business scene,” she says. “This is just home.”

For more than 140 years, Jamestown was home to the Oakdale Cotton Mill, set on the Deep River on the south end of town. It put generations of people to work spinning dyed yarn and twines. In 2009, after years of competition from overseas, the assembly lines went silent. A smokestack towers over the deserted brick buildings, broken windows and littered, weed-choked lot. More than 30 mill houses built in the early 1900s are mostly empty, their white paint peeling off. At one street corner stands the former Oakdale Store, a wooden slab nailed across the front door. Will Ragsdale’s family operated the mill from the 1880s until its closing. He worked there himself when his father, Billy, was the president.

“I remember when it was a thriving community, and I hate to see it just sitting there,” he says. While other towns have resurrected their old mills into homes and entertainment districts, Oakdale remains undeveloped. The buildings are still viable, he says, and it’s just a matter of time before the right investors infuse life into the place. But it would be a herculean task. “Something of that size and magnitude requires a lot of smart people around the table and a lot of good thinking.”

At 54, Ragsdale is old enough to remember the mill’s glory days but young enough to envision a modern remake. “I can see restaurants,” he says. “It would be cool to have a distillery and brewery down there.” The more he talks about it, the more animated he becomes. He can see residential units. He can see retail. He can see a greenway along the river. “I can see people kayaking up and down the Deep River, dropping their boats off and having the mill be a sort of destination.”

Even with the cotton mill shuttered, some factory life still goes on in the heart of Jamestown. Within view of Main Street is the brick smokestack of Highland Containers, which makes corrugated packaging supplies. The town is emerging as a hot spot for some pretty cool businesses. Black Dog owner Beck sees Jamestown as blossoming into something akin to Blowing Rock, referring to the mountain getaway near Boone. Barely more than a decade ago, he says, downtown was a drowsy place. “Now you have a bunch of little businesses pop up on Main Street, including us.” ■