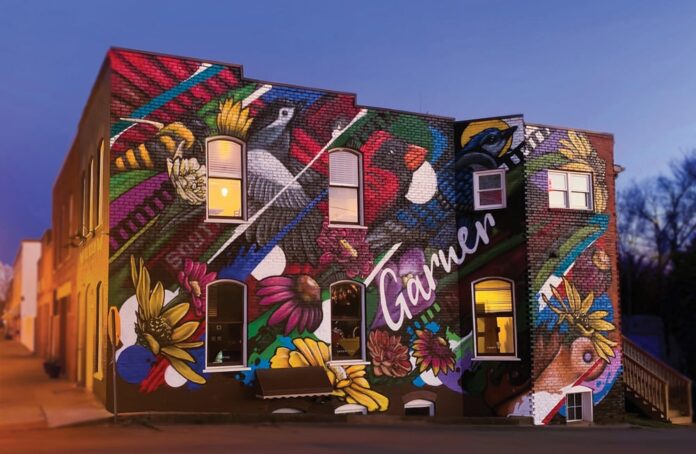 Featured in this month’s TOWN SQUARE: Garner. With a vibrant downtown, art scene and big-box retailers, Garner sets itself apart as more than just a bedroom community.

Behind the wall of painted wildflowers and a cardinal bigger than a window pane, Jeanette Craven has briefly unmasked herself to sip an espresso.

“I love this place,” she says, while seated at a corner table of Garner’s Full Bloom Coffee Roasters on Main Street. The mural of birds and blossoms splashed along its outside wall is the handiwork of Raleigh artist Sean Kernick. Like many other downtowns across the country, the coronavirus pandemic has slowed business, but the easing of restrictions has given this coffeehouse and its neighbors a much needed jolt. On this weekday morning, regulars stream in and out, all wearing masks.

“[Business] has been going pretty steady,” says employee Hunter Howell. At the outset of the pandemic, that meant offering only takeout, until cafes could operate at half capacity.

For Craven, it’s never felt so good to once again sit in her favorite coffee shop and drink up the atmosphere. She lives next door in a building that dates back to 1914 and now houses four condos. Originally from Mooresville, she discovered Garner in 1971 after graduating from N.C. State University. She moved away, but with her son living in Raleigh — Garner is six miles from the state capitol building — she returned to her old haunts. “As soon as I came back, it felt like home.”

Full Bloom opened in 2017 inside the former Bank of Garner, built in 1910. Owners Patrick and Michelle Byrd renovated the building with a $75,000 boost from the Main Street Solutions Fund, a state grant to encourage entrepreneurs to invest in downtowns.

Main Street in Garner runs parallel to the railroad and is lined with refurbished century-old brick storefronts. When the North Carolina Railroad came through in the late 1840s, a water and wood stop sprang up here at an artesian well to provide fuel for locomotives. The community, originally incorporated as Garner’s Station, reincorporated as the town of Garner in 1905. It now has a population of more than 32,500, having doubled since 1990.

In the modern era, big-box stores and national chains followed the multilane highways — U.S. 70 and U.S. 401 — leaving downtown to hollow out. “We, for a long time, suffered with empty buildings and an area that needed a lot of attention,” says Mayor Ken Marshburn, who was elected in 2019. “We’re proud to say that most of those buildings, if not all of them, are now filled with businesses. It’s really becoming an artsy kind of place.”

Businesses such as Shady’s, a bar and barbecue eatery that opened in 2018, and Gearworks, a tech incubator owned by the town, had begun to fill those once-forgotten brick buildings along Main Street — only for the pandemic to upend the day-to-day. It seems as though the vibrancy that had been pumped into the heart of Garner could dry up.

At the Garner Baseball fields just outside downtown, Andrea Proffitt reflected on the pandemic’s hometown impact as her 9-year-old son, Jace, finished a baseball game. She and her husband, Chuck, have lived in Garner for 18 years after moving from Tennessee. “There’s a lot of, I don’t want to say sadness, but you come from a little town where there’s always something going on, there’s always an arts event going on, [and] it’s hard not being able to go out and be around others,” she says.

Youth baseball swung back into action in June, fostering the communal experience she had been craving. Garner, she says, is a family-centric place with a wealth of athletic programs for kids. It’s refreshing “just to see them smile and laugh again,” she says.

But many in the business community still feel benched. “Garner is a collection of small businesses,” says Joe Stallings, Garner’s economic development director. “And we’re seeing companies really struggle. A lot of these companies didn’t have online presences [and] didn’t generate a lot of their sales from online.”

In the early stages of the crisis, Illinois-based food distributor Martin Brower, one of Garner’s bigger employers, submitted a federal filing required when a company plans a mass layoff. Stallings says the company furloughed 59 people. “I believe that the vast majority of those impacted have since been rehired,” he says. Aside from temporary closures of businesses deemed nonessential, he says the pandemic didn’t cause any businesses to close permanently.

“By and large, we’re still seeing economic development projects proceed,” he says. “It is a little bit slower, most definitely, than what we’ve seen over the last couple of years, but the projects that were on the move are still on the move.”

Though it slowed many brick-and-mortars, the pandemic proved a boon for e-commerce, spurring Amazon to double the workforce at its sprawling Garner fulfillment center that is under construction. In July, the company announced plans to hire more than 3,000 people — double its original estimate.

Announced in 2018, the four-story, 2.6 million-square-foot building sits on a former ConAgra Foods plant site adjacent to Interstate 40. An explosion at the Slim Jim factory in 2009 killed four workers and injured dozens more. After the rubble was cleared, the site remained vacant for years until state and local officials wooed Amazon. Employees will work alongside robots to pick, pack and ship items to customers in the region, with pay starting at $15 an hour. The company expects the facility to open for the 2020 holiday season.

COVID-19 also spawned business opportunities in Garner, engendering companies to create new product lines. Startup Sanctuary Systems, which develops fiber technology and non-woven materials, began making face masks for workplaces in the Triangle. Stephen Sharp, director of operations, says the company’s one machine can churn out 3,500 masks per hour. “[Sanctuary Systems] is at such a capacity that it’s adding more machines and employees just to keep up with the demand of face masks, and it’s only selling them to businesses.”

The wheels are still turning at Gearworks in downtown, a public-private partnership to furnish entrepreneurial “bridge space” for small businesses, which allows startups to set up shop for a limited period. Started in 2018, Gearworks is an effort by the Downtown Garner Association to attract tech companies to Main Street. One tenant, Operation 36, develops software and curricula to teach people how to play golf. It started with four employees but now employs about a dozen, Stallings says.

Other creative and tech companies in downtown Garner include Rising Stream Media, a marketing firm; graphic design company Grafix House; and Garner Underground, which builds instruments and controls for the HVAC and agricultural markets.

More than just a bedroom community

Even though Garner borders Raleigh, town leaders say Gearworks, its up-and-coming downtown, a variety of parks and youth sports, and the Amazon center make Garner more than just a bedroom community. In 2013, the National Civic League named Garner an All-America City, citing its nonprofits and arts community. A prized possession is the Garner Performing Arts Center, located in the former Garner High School. While the pandemic has closed the curtain on performances for now, its 471-seat auditorium has hosted concerts featuring Broadway.

Another attraction still in the works is the Garner Recreation Center. Standing along Main Street, the nearly 40,000-square-foot building will include a gymnasium with high school basketball courts, an indoor exercise and walking track, and playgrounds and trails outside. It’s been beset by construction delays but is expected to open this year, depending on coronavirus restrictions. “I think it’ll be a real catalyst for bringing people to our downtown area,” Marshburn says. “It’ll be a focal point and bring tournaments into town.”

Months into the pandemic, people are coming back to their favorite downtown hangouts. At the Locs, Naturals & More hair salon, which had to shut down for more than two months, 33-year-old owner Kentrell Perry says he’s back up to nine employees — only one fewer than he had pre-pandemic. On this weekday, he has 40 clients scheduled.

“If you’re hopeful and you’re upbeat and you’re doing your work and keeping a good head on your shoulders, then you’ll attract other people,” he says.
It’s a cheery outlook with a distinct sense of optimism. No mask can stop the spread of good vibes. ■

-Bryan Mims is a writer and reporter at WRAL-TV in Raleigh.