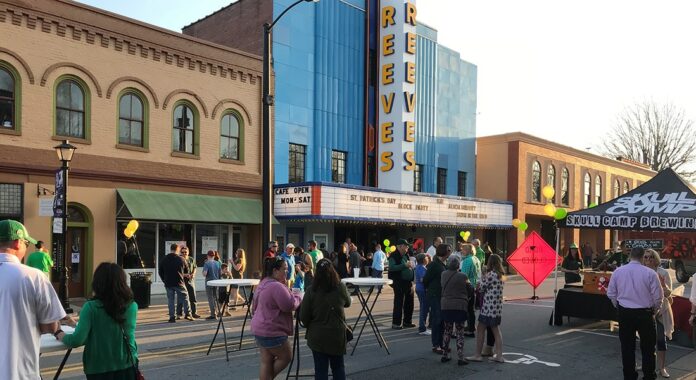 Main Street’s historic Reeves Theater has been a staple of downtown Elkin since the 1940s. Courtesy of the Town of Elkin

The Reeves Theater is one of those old-school art deco movie houses, with its marquee bejeweled in lightbulbs suspended over the sidewalk. Built in 1941 with 700 seats, the Reeves brought the silver screen to the red-clay mill town of Elkin.

By the 1990s, the theater’s golden age had flickered out, and it appeared the Reeves was destined for the same fate as the town’s major textile mill: demise and desertion. Moviegoers had fled to the multiplexes, and the Main Street venue sat vacant for 23 years. “Everything inside was damaged or destroyed,” says Debbie Carson, one of the owners giving the Reeves a revival. “The first time I walked in, I was not convinced the building was salvageable.” The seats were moldy, the roof sagged, and “the air felt heavy and horrible.”

Today, the theater has been restored to its former glory. With more than 250 seats, the venue hosts concerts by local and national acts and a weekly open mic night for aspiring singers. Its Old-Time Jam showcases local musicians every fourth Thursday of the month. The theater has a cafe that serves farm-to-table fare from vendors in the area; its bar brims with regional craft beer and wine. “In the summer, we have loads of fresh vegetables, tomatoes and things coming in,” Carson says.

She and her husband, Chris Groner, along with partner Erik Dahlager, bought the theater in 2013 with plans to turn it into a live music destination. What had been a silent shell is up in lights once again.

Just as the Reeves Theater has found its second act, so has Elkin, a town of about 4,200 people set among the foothills along the Yadkin River. For more than a century, the economic bedrock of this town was wrapped in blankets. The Chatham Manufacturing Co., started in 1877, churned out millions of wool blankets and flannel garments, employing 3,500 people during the 1960s and ’70s. It stood like a brick citadel on the hill, the words “Chatham Blankets” spelled out in lighted red letters, a comforting glow on cold winter nights.

In 1988, after more than a century of ownership, the Chatham family lost control of the plant to a Danish textile manufacturer. Within a few years, the business was insolvent. True Textiles later occupied a small area of the complex, once employing about 100 people. But Leslie Schlender, Elkin’s economic development director, says the Canadian-owned company moved most jobs to the Northeast, keeping a handful of engineering, design and sales positions in Elkin. The curtain closed on textiles, but the historic buildings didn’t exit stage left.

“Chatham was what built this town, so we don’t want to have all of that history erased,” Schlender says. “I think our town has a good philosophy of reusing rather than demolishing.” The factory now belongs to Charlotte-based JW Demolition, which is tearing down the most dilapidated parts of the mill but saving viable buildings for redevelopment. It leases space to the Foothills Arts Center, which offers workshops in pottery, weaving and other crafts.

Construction is ongoing, and the buildings have a ghostly complexion: shattered windows, crumbled bricks and debris strewn across a potholed parking lot. But the site is fertile with possibilities. The arts center plans to create housing and studios for full-time artists, similar to the Penland School of Craft near Spruce Pine. There’s also talk of a textiles museum.

Elkin is snug in the scenic Yadkin Valley, which flows with more than 40 wineries, most of them within a half-hour cruise. With the Blue Ridge Mountains as a backdrop and Interstate 77 at its doorstep, Elkin is primed for daytrips and weekend wayfaring. The state’s Mountains-to-Sea Trail runs through town, linking Elkin to Stone Mountain, one of the most visited N.C. state parks.

“If you go to downtown Elkin at night, you will see our streets are crowded with people who are taking advantage of the music venues and the dining venues and the art venues,” Bishop says.

In March 2017, the town kicked off Explore Elkin to enliven downtown. The effort fired up Food Truck Fridays and live music at the Elkin Farmers Market. It also began casting Elkin as a mecca for outdoor devotees, with paddling on the Yadkin River and hiking on area trails.

When Explore Elkin launched, Main Street had 17 empty storefronts; now it has fewer than half a dozen. It has a voguish cocktail bar called Fruition; a Southern-food-with-a-flair eatery called Southern on Main; an espresso-fueled bakery called Lucky Bake; and a pizza-and-pints place called Angry Troll Brewing. The brewery occupies a corner of an old tobacco warehouse now called The Liberty.

The warehouse was built in 1917 and, by the 1940s was a wholesale grocery operation. Elkin native Cicely McCulloch bought the 30,000-square-foot property about eight years ago after it had been vacant for more than a decade and invested in a $2.5 million renovation. With original pine floors, 100-foot timber trusses, open rafters, and brickwork, Coley Hall at The Liberty is now a popular wedding venue that can seat more than 500 guests. In addition to helping downtown grow, McCulloch has served on the town council for 10 years.

Small town renewal is rarely easy, of course. One of Main Street’s most venerable small businesses closed on Jan. 31. Royall’s Soda Shoppe, with its “world famous hot dogs” and old-school root beer floats, had been a beloved hangout for generations. “It breaks my heart to do this,” says owner Tina Holloway, who had her first job here when she was 15. The replacement of downtown traffic lights with four-way stop signs had helped make the business unprofitable, she says. “It has decreased my business by 50%,” noting customers told her they’re “not fighting that downtown mess.”

The N.C. Department of Transportation and town leaders say the stop signs have made Main Street more walker-friendly while reducing crashes. Bishop disputes Holloway’s claim that signage steered off her clientele. “Their business model did not adapt to what was going on in downtown Elkin,” he says. “You can’t survive on a greasy hot dog lunch when you have millennials working in downtown Elkin. They’re looking for more upscale soups and salads and sandwiches.”

Many millennials work at Prism Medical Products, which is a short walk from Royall’s and employs about 150 people. Since the four-way stops were installed last summer, Bishop says five businesses have opened on Main Street. Still, there’s a sense of loss with the closing of the diner. Just days before the last order was served, a group of lunchtime regulars gathered around a table with a cake. On top were these words: “Royall’s Soda Shoppe, Thanks for the Memories.”

Jeannine Underdown, who brought the cake, says the diner holds a special place in her heart. It’s exactly where her mother, who passed away last year at 89, sat for hours every day for years. “She knew everything that was going on in downtown Elkin — everybody and everything.”

The new Elkin isn’t all about wine, weddings and wandering the woods: It also boasts some major employers. Hugh Chatham Memorial Hospital, a locally controlled not-for-profit, has more than 700 employees, making it the biggest employer. Elkin is also home to a Vaughan-Bassett Furniture Co. finishing plant, a Weyerhaeuser wood-panel factory, and a 200-employee Pittsburgh Glass automotive glass facility.

Elkin is also proud of its city school system, which ranked fifth of the state’s 115 school districts based on end-of-grade and end-of-course exams in 2018-19.

That only sweetens the charm of Elkin for Carissa Dippolito, 27, cafe manager at the Reeves Theater and mom of a 7-year-old. She moved here from San Diego after her father-in-law retired to Elkin and bought one of the town’s oldest houses. “I think for raising kids, it’s a great place. It’s down-to-earth, [and] you know who your kids are going to school with.”

She earns a livelihood in the old-school theater that has found a rich, new life. Elkin may be rolling the credits on textiles, but it’s now in the opening scenes of what it hopes is a blockbuster sequel.