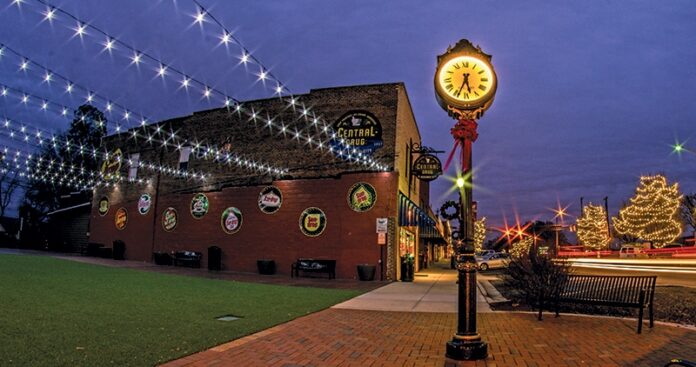 As the auto and battery industries shift gears, Bessemer City is a hot spot for lithium.

Tangles of brown vines cling to three strands of barbed wire atop the old factory’s perimeter fence. The no-trespassing signs lend an air of austerity to this leftover from the long-ago textile boom. A smokestack towers over the brick shell, though it hasn’t exhaled in decades. The boom these days comes from the worldwide rush on quiet, electric vehicles. And this former mill town sits near a mother lode of lithium, a key component in many EV batteries. With the construction of a lithium mine and the expansion of a lithium plant, involving an investment of more than $500 million, this metal is sure to shine as an economic lodestar for Bessemer City in Gaston County.

But across the railroad tracks from the textile factory, at a cafe called Blossom, a 26-year-old entrepreneur looks out on the hollow grounds and sees his bread and butter. Jonathan Fioritto came to Bessemer City to open this coffee shop in 2019 with the expectation that the abandoned Osage Manufacturing Co. would reawaken — not as a mill but as a millennial magnet. “Our main reason is that over there,” he says, gesturing toward the town’s historic hub. “That’s why I’m in Bessemer City, so I need them to get started.”

The $40 million project has had a sluggish start. In 2015, Bessemer City leaders began promoting a vision to revive the Osage mill. Built in 1896, it was one of the town’s first textile plants. It stayed in operation until 1995 and has stood lifeless ever since. Osage Mill Residential, a limited partnership, bought the 245,000-square-foot building in 2018 but ran into delays in securing federal funding for the project. City officials say no taxpayer dollars are involved; rather, investors are relying on federal and state historic tax credits.

In 2020, the coronavirus pandemic and a sickened economy further stalled groundbreaking. Joshua Ross, the town’s economic development officer, expects work to begin this year, possibly by spring. “It will have a tremendous impact on our downtown and really the community as a whole.”

The development will feature 150 apartments and roughly 30,000 square feet of retail and commercial space. Ross, 30, grew up in Bessemer City and knows how venerated the mill is in the town just west of Gastonia. “It resonates with people a lot,” he says. He sees the Osage Mill project as the spark that will make his hometown a hot spot. A few doors down at Blossom, Fioritto imagines his cafe as a hangout for the mill’s residents — a place to grab a soup, salad, sandwich, cupcake or beer. He has his own loft apartment above the cafe. What he needs now is some more verve on Virginia Avenue, which passes as the town’s Main Street. “There’s not a lot of foot traffic in Bessemer City right now,” he says.

And yet, it is a wonderfully walkable town. You can stroll from Blossom to Centennial Park, with its perfectly green lawn and stage where summer concerts (before COVID) had people singing and swaying in the evening sun. Bordering the park is Central Drug, its brick wall splashed with old Sun Drop ads. The decor inside is an antidote to the lookalike chain pharmacies anchoring busy street corners across the country. It’s pure Americana, replete with a soda fountain and a museum’s worth of vintage medicine bottles.

Townsfolk have treasured this store since it opened in 1927. Step inside and sit in one of the swiveling chairs at the counter, topped with jars of candy. Order an orangeade or a milkshake or two scoops of butter pecan ice cream, all while watching the husband-wife team of Robbie and Melissa Putnam fill prescriptions. “I’ve known most of the people all my life,” says the soft-spoken Robbie, who took over the business from his father in 1997.

From Central Drug, it’s an easy walk to Pennsylvania Avenue and 13th Street for burgers and beer at Whiskey Mill — part Western bar, part sports bar and part beach bar. You can saunter through the green space of Uptown Park, where the Norfolk Southern railroad track divides the business district in two.

A TALE OF IRON, LITHIUM AND TEXTILES

Before the railroad and cotton mills arrived, James Ormand settled the area in 1754 after receiving a land grant from King George II. He mined iron ore and developed the Ormand Furnace, heating rock and sediment to extract iron for making a variety of implements. The furnace churned out iron products that were sold across the state until the 1850s, when a new technology rendered the furnace obsolete. An English engineer named Henry Bessemer developed an inexpensive technique for making steel from molten crude iron. Patented in 1855, his process drastically reduced the cost of steel and vastly increased its use around the world. Without his invention, steel girders for railroads, bridges and skyscrapers would have been a pipe dream. Eight cities and towns across America are named in his honor.

The founder of modern-day Bessemer City bought land owned by the Ormand family in 1891. After moving his family from Reidsville, John Askew Smith wanted to establish a well-laid-out town with walkable neighborhoods and a park along the railroad. In 1893, he and other locals petitioned the state legislature for a town charter. Once granted, they named the town after the man who revolutionized the steel industry. While mining has made a definite mark on the area’s economy, Bessemer City would never be known as a steel town. The pay dirt for local mining operations since the 1950s has been lithium — and Gaston County has some of the richest deposits in the country.

This area is what geologists call the Carolina Tin-Spodumene Belt. From the 1950s until the 1980s, mines in the belt supplied most of the world’s lithium, until cheaper deposits turned up in South America and Australia. With the burgeoning demand for lithium batteries, especially for electric vehicles, cellphones and cordless tools, it’s a much sought-after metal. And this belt is getting back in business: A new public company called Piedmont Lithium Ltd. is building an open-pit lithium mine north of town that is expected to begin production in 2023. It also plans a chemical-processing plant.

But through most of the 20th century, Bessemer City’s signature industry wasn’t mining, it was textiles. Smith went down in history not only as the town’s father, but as founder of the Osage Mill.

Several other textile mills wove themselves into the fabric of Bessemer City for decades. By the 1980s, however, international competition began heating up, and jobs headed overseas. This is about the time Bob McDonald, owner of McDonald’s Restaurant — not to be confused with the golden arches franchise — felt the hunger pains. “When all the mills closed up in the ’80s, that’s when we saw a big drop-off in business for a while,” he says. All these decades later, his burgers remain local favorites, garnished in the Carolina style with chili, slaw and mustard.

McDonald, 64, has closed his indoor seating because of the pandemic, but at midday, cars are stacked in the drive-thru and the staff is darting from kitchen to window. Although the daily shift changes and lunch breaks of mill workers no longer feed his cash register, new industries are bringing a steady diet of fresh patrons. Just east of downtown is the South Ridge Business Park, home to five manufacturers, including the town’s largest employer — Dole Fresh Vegetables. Opened in April 2007, the plant has a workforce of about 900 and primarily churns out bagged salads. Also in the park is Dhollandia Manufacturing, a Belgian company that makes hydraulic liftgates for trucks and employs about 200 people.

Other businesses in the park include Tosaf, an Israeli company that produces additives and compounds for the plastics industry, with a payroll of more than 100. Hunter Douglas employs about 200 people at its plant that manufactures designer window shades. And Advanced Drainage Systems, with a staff of about 200, is one of the largest polyethylene pipe and fittings manufacturers in the country.

Outside the business park, on the west side of town, is a 900-acre lithium plant owned by Philadelphia-based Livent, formerly FMC Lithium. It opened in the 1950s. In late 2020, the company completed an $18 million expansion to boost lithium production by 50% and create 30 jobs, bringing total employment to about 270. During the groundbreaking in October 2019, Livent CEO Paul Graves said, “Bessemer City is one of the cornerstones of Livent’s business and is becoming increasingly more important to many of our customers who want the flexibility of sourcing their lithium products from the Western Hemisphere.” Livent’s Bessemer City plant makes three types of lithium, including the lithium metal that’s used in high-performance batteries.

Given the surge in lithium demand, the growth at the business park, the snazzy plans for the old textile factory, and the town’s prime location along Interstate 85 only 30 miles west of Charlotte, Town Manager James Inman says, “We feel like we’re just on the cusp of getting to the mountaintop.” On top of all that, Bessemer City is banking on the 40-acre Stinger Park to be another game changer. Still under construction, it will include three tournament baseball and softball fields, along with two multipurpose fields. Town leaders see it attracting regional baseball tournaments and spurring housing developments on surrounding land.

“Even though we’re a small community, we can still attract some pretty big players,” Inman says, noting that three buildings were bought in late 2020, with two of them to become restaurants. He’d like to see a brewery come to town and tap into the outdoorsy crowd that flocks to nearby Crowders Mountain State Park, one of the busiest state parks in North Carolina.

The mountain, with its craggy ridgeline and wooded slopes, looms on the southern horizon — a tangible, ever-present metaphor for Bessemer City’s aspirations. The smokestack of the old factory also looms, a daily reminder of how yesterday can be refashioned into today and carry a forward-thinking town into tomorrow. The brown vines and weeds will be cleared, and new growth is sure to take root. ■