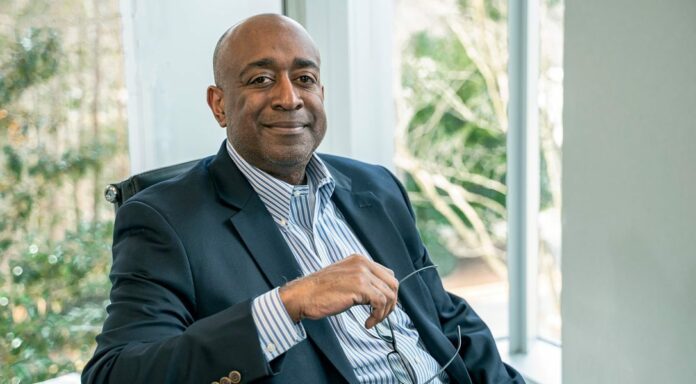 Donald Thompson is CEO of Raleigh-based Walk West, a 40-employee digital-marketing company that ranked in the Inc. 5000 list of fastest-growing companies in recent years. He joined the firm in 2016 when Brian Onorio was the only full-time employee. Thompson, who dropped out of East Carolina University as a junior to work full time, was a top executive at two Triangle technology firms that were acquired by software giants Adobe and India’s KPIT. He serves as a board chairman and director at several other area companies. Under his leadership, Walk West started a new unit, The Diversity Movement, to train businesses on inclusiveness.

Thompson shared his views on how businesses are responding to issues of inclusion in comments edited for length.

► What is your sense of the protest movement sweeping our state and nation?
What we are going through now is transformational in that there has been an awakening of white Americans to the plight of African Americans. There are people who were able to easily disregard the systemic racism of our country, but the catalyst of George Floyd’s death and it being captured on video, basically live television, created an imagery that could not be ignored. When something is in front of you and you can not ignore it, now you have to choose. Am I on the right side of human decency, or am I a believer that I’m better than my fellow man just because of the color of my skin? People have to choose.

► Do you think the evil reflected in the Minneapolis police officer’s actions is rare?
Evil is an appropriate characterization for that particular police officer. There are significant instances of that not being the only situation where an unarmed black man who was posing no threat was killed. So if you think about evil and you think about racism, ignoring evil is also pretty bad. If you think about the cop who committed this crime and the rap sheet he had of previous transgressions, there’s a system that allowed him to still be on the force.

There’s this system in our country in terms of the overcriminalization, the overcharging of African Americans versus white people of the same crime. We can call it evil, we can call it systemic racism. … But absolutely there’s enough people in this country that have ignored evil. Whether they are evil or not, the system has allowed evil to grow and mature and develop and sustain itself.

And so it’s been easy in the past for those of us to say, ‘Well I’m not racist’ and feel OK with it. Go to church, spend time with family, you are all good.

Now people have a call to arms, and I’m pleased to see many people in my circle in business and life and friends of all different backgrounds, that the majority of them are moving past the justifications and starting to have the kinds of conversations about ‘What are my responsibilities to make it better?’

My drive has been more about honoring my parents, my grandparents, and the struggle of those before me. It’s not so much the anger but the sense of responsibility of what I’m supposed to do with what I know and with that, to give back.

The anger for me, and I’ve had bouts with it, wasn’t productive. But I’m aware that the world is not fair. My dad taught me early on that you have to be twice as good to get half as far, and you can’t hope your way to winning. Unfairness is built in the system, so you have to be better. That’s the mindset that has driven me.

► Why haven’t decades of diversity programs worked?
In order for diversity and inclusion to be important, people have to accept and acknowledge their culpability on why things are not good. That’s a difficult thing for people to do.

For example, people will promote white women, who have grown in the marketplace. So companies then say, ‘We are diverse because we have white women in leadership.’ But that isn’t a culturally relevant organization. [Another problem with] diversity and inclusion programming is that the wrong people have been leading it. [Budgets are often controlled by] HR people who don’t understand how to speak in the language of the business to connect the emotive concerns for diversity and inclusion to the economics of how the business grows.

Even though they are well-meaning, they aren’t tied to the outcomes of the organization — the [profit and loss] statement — and why diversity of thought is good, why diversity in gender space is powerful. [Diversity and inclusion] programs also don’t work because they are underfunded. People will hire a chief diversity officer with a limited budget and no power. That is a PR activity and a guilt removal activity versus a programming activity with the same outcome intensity as any other business unit.

I want to be effective more than I need to be right. I don’t spend a lot of time on the past transgressions of America or society or white males. I’m trying to find allies moving the ball forward. And if you’re down with building a great future, then let’s do that.

► Will the protests over police actions and systemic racism turn into something positive?
[That] implies that [the protests] aren’t positive.

For news organizations to look at diversity in newsrooms and how they are doing their reporting, a domino falls. … All of a sudden, if we can get enough dominos to fall, we can create longer-term momentum.

If Softbank says we are gonna have a $100 million fund for African American companies, and Bank of America is going to offer $1 billion for racial equity projects, and if Facebook is gonna commit $200 million … what they are doing by opening their wallet, which is the language of business, [is creating] an opportunity [where] we can change the narrative.

► When did Walk West launch The Diversity Movement project?
It started two years ago as a dabble, and became a full commitment a year ago. We started putting money and resources into building out a budget for video content. Our four-hour course is really phenomenal. We put a lot of time and money and our heart into this foundational course.

We didn’t foresee what happened in Minneapolis. We did have a pulse on the changing demographics of our country, and we did have a pulse as marketers on the transition of companies looking at multicultural marketing more broadly. We saw that trend. We thought it was going to take a couple more years, and we would build something that was really significant, and then the catalyst occurred. And things have gone really bananas.

► How have things changed in the last 90 days?
Whether it is for good business reasons, a change of heart or not wanting to be on the wrong side of history, people are open minded about spending money on race relations, diversity training and education. I’d say the tide is turning in a major way.

What encourages me is that business leaders want movement. They feel personally behind, because many of them know they missed something for the last 10 years of their career. They just didn’t get it right, they just didn’t understand. I’m not here to judge. But at this moment, there is a higher percentage that wants to activate in a sincere way. And that is a good thing. ■