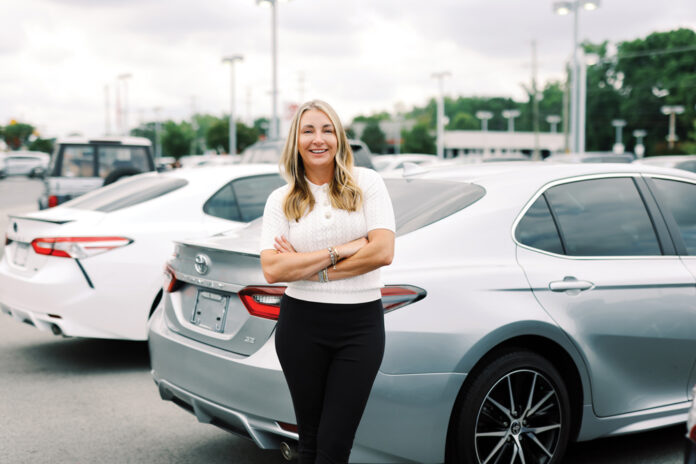 Toyota Motor’s plan to produce electric batteries near Greensboro isn’t the first time that the Gate City has played an important role in the Japanese automaker’s history. The Rice family, which had a pioneering hand in popularizing the company’s Corolla sedans in the Southeast in the 1960s, is poised to benefit from ripple effects of Toyota’s Tar Heel expansion.

Mary Rice, the third-generation member of her family to run Rice Toyota, is planning to double the dealership’s physical plant in the next few years. A key reason is the $3.8 billion campus under construction near Liberty in northeastern Randolph County, just 20 minutes from Rice Toyota’s Battleground Avenue site in Greensboro.

Toyota’s generous employee purchase benefits will create an influx of new Toyota drivers after the plant opens in 2025, she says. “That’s 5,000 potential new customers. It’s a phenomenon all the time around Toyota plants.”

While there are four Toyota dealerships within a similar distance of the pending factory, Rice says hers is the closest. The 2,000-plus employees and their families — which is how she gets to 5,000 new customers — are likely to live across the region.

Rice, 43, has been at Rice Toyota for a decade now, including two years as dealer principal, industry jargon for the boss. It remains one of the highest-volume Toyota dealers in the Southeast with annual revenue of $150 million, comparable to pre-pandemic days. The business employs about 170 people.

She’s likely to be there a while. Rice says she is smitten with the car business, even as it faces an increasingly turbulent automotive sales environment. The dealership industry has faced chaos in recent years thanks to a global pandemic, the rise of electric vehicles, unprecedented supply chain problems that have curbed production, and a new generation of buyers who rely on cellphones to make purchases. For now, many dealers are benefiting from record prices for cars and trucks and greater profit from servicing cars as owners hold on to their vehicles for longer periods. But that near-term windfall could be swallowed up by the industry upheaval that has some auto dealers shaking. Rice sounds unfazed.

“I’m so ready for all this,” she says. “This is such an exciting time and this is such an interesting business, what with all the changes. It just makes me want to get up and get started in the morning.”

Rice is always in the minority when auto dealers gather because she’s female; a small fraction of the 16,700 U.S. auto dealerships, including about 570 in North Carolina, are believed to be owned by women. Even fewer hold bachelor’s degrees in marine biology. “There aren’t many of us,” Rice confirms.

Her interest in studying sea creatures led to a brief, sweaty job at the North Carolina coast, followed by a successful career in real estate before she headed back to the Piedmont to help sell more Camrys, Tundras and other models.

Rice’s grandfather, Garson Rice Sr., founded the dealership in 1965 by signing on with a newfangled Japanese automaker just two decades after he’d fought their countrymen on Guadalcanal. Toyota didn’t have dealerships in the Southeast at the time, according to a 1990 Greensboro News & Record story. By the mid-1970s, Toyota had beat out Volkswagen as the best-selling import brand in the U.S.

The elder Rice grew up in Kannapolis and was a wheeler-dealer who introduced the 24/7 “sale-a-thon” to Greensboro. He once paid a fine to the state after the N.C. Attorney General’s Office determined he was advertising vehicles that weren’t always available. In the late 1970s, Rice boasted of selling as many as 1,089 new cars in a month, which he called a record at that time for Toyota dealerships.

The pugnacious businessman wasn’t afraid to go to court to assert his rights, even against his own business partners and distributor. In 1986, he filed a $40 million lawsuit against Southeast Toyota Distributors, a Jacksonville, Florida-based company franchised by the car manufacturer to deliver cars throughout the region. Rice alleged that Southeast was allocating new vehicles in an unfair manner that disadvantaged him. The lawsuit was settled out of court two years later. Decades later, the Rices remain in Toyota’s good graces.

The business was a second home to Mary Rice, whose dad inherited his own father’s workaholic genes. It was routine for Mary to take dinner to the dealership, often at 5 p.m., when Garson Rice Jr. had a half hour to spare before the craziness picked up again at 5:30.

Rice’s father, who took over from his late father in 1997, still spends several days a week at the dealership. He shrugs at the lifestyle he’s passing on to his daughter.

“This business just becomes part of you, just grows on you,” he says. “You either want it or you don’t. All the hours, all the time you put in, that just becomes kind of normal.”

Garson Rice Jr.’s three children worked part time at the dealership while growing up but didn’t show an inclination to stick with the business. Mary had her heart set on being a scientist, enrolling in marine biology at N.C. State University. A summer internship with an environmental consultancy based in Wilmington led to hot, sticky work that included days squatting amid mosquitoes in a swamp. During that stint, she had lunch with a real estate agent who explained her work.

“It was all so interesting. I just couldn’t believe it,” says Rice. She started taking real estate courses while finishing her college degree, then headed after graduation to Wilmington to work as a rep for a tract builder selling homes in three local counties. “I just killed it,” she says. “Then I did some commercial projects with builders, and a few other things here and there. Sold a few homes on Wrightsville Beach, at Figure Eight Island. I made money. I met a lot of interesting people. It was great.”

Then one day, her dad called. There was this thing called the internet and something else termed social media. The Rice Toyota website was a mess.

“Dad, I can help you with that,” she said. The project turned into an unofficial full-time job and residency at her parents’ Greensboro home. It soon dawned on Mary that her destiny didn’t lie in coastal real estate.

In a Hallmark movie, perhaps, she would have immediately become general manager of the dealership. That’s what people think happens, she says. “They figure it was just handed to me. But really, this is a huge business. Can you imagine what a catastrophe that would be, if they just let the kids (of dealers), or anyone the dealer wanted, in to run the business?”

In 2012, Rice Toyota’s veteran general manager became ill and her father asked her to step into the role.

Eight years later, having gotten the hang of things, she purchased a share of the dealership. Her husband, Andy Slaughter, whom she met at the business, is now the general manager.

The succession plan was unplanned, Garson Rice Jr. says. “It couldn’t have worked out better. Having your daughter follow you in the business … that’s the best thing that can happen to you professionally.”

Rice is eyeing the future in the context of a fast-changing industry. She hired a contractor that also builds Chick-fil-A’s drive-thru awning systems to erect one for her service department. Service reps greet customers in the new space, which keeps customers dry but doesn’t expose them to exhaust fumes and the grit of the old service entry.

When the supply chain seized up during the pandemic, she launched an aggressive parts-buying operation. Rice told her managers to get their hands on every part they could, until they had at least a four-month supply of anything that might be needed. She’d find the money to make it happen.

She turned the top floor of Rice’s body shop — it’s located in northeast Guilford County, about 15 miles from the dealership — into a warehouse that serves as a distribution center.

Because of that strategy, Rice says her dealership was often the only store around that could perform certain work. It allowed Rice to main-tain staffing levels when many other dealerships furloughed workers.

Now she’s preparing for a future in which most dealerships operate with fewer new vehicles on site. Buyers will essentially order cars online, or in the showroom, aided by tablet-bearing salespeople who advise customers on choices and financing. There’s likely to be much less “let me take that offer to my manager” salesmanship, she says.

“The red ink all over the offer sheet and all that. … We’re done with that,” she says.

Staying ahead of the curve won’t be easy, Rice acknowledges. A long list of potential disruptions lurk. Carvana and other online services are influencing used-car sales. Large conglomerates are scooping up family-owned dealerships. Electric vehicles may not require the same level of service as gasoline models, which may reduce the profits at dealership shops.

Tesla’s direct-to-consumer sales model has also caused other manufacturers to seek ways around dealers. But that’s an uphill battle in North Carolina. The powerful dealership lobby — Charlotte’s Hendrick Automotive and Sonic Auto are two of the largest U.S. industry players — has prompted the N.C. General Assembly to pass laws to protect franchisees.

Rice is confident that local dealers have a bright future, including single-store operators like herself. It helps that Toyota has treated the Rice family like royalty for many years — Garson Rice Sr. once received an heirloom kimono from Toyota’s CEO — and has repeatedly affirmed its commitment to local dealers.

While she fields periodic inquiries from prospective buyers of the dealership, Rice says it’s far more likely she will be an acquirer. She is a member of the General Motors Dealer Development National Candidate Pool, which identifies opportunities for potential dealership acquisitions by women and minority owners.

With auto sales changing, Rice Toyota is trying to keep pace. Its service area includes a cozy “water vapor” fireplace, a Toyota “merch” shop is under construction, and Freeman Kennett Architects of High Point is designing the expanded showroom. In a digital age, Rice emphasizes the importance of human contact.

“The biggest complaint we hear from our customers — people who always bought a hybrid but went and bought a Tesla because it was new, and we get at least one of those a week who come in to trade — is that they just can’t get to a person,” says Rice. “They had to take it to a service center in Raleigh three times, but they can’t get it fixed.

“That’s just not right. When it gets to that point with a customer, I don’t care who you are, or who owns the company, at that point you have to be a person. You’ve got to own it. You get it fixed, once and for all, or you trade it and get the customer in another car. That’s what’s important in this business. It always has been and it always will.” ■