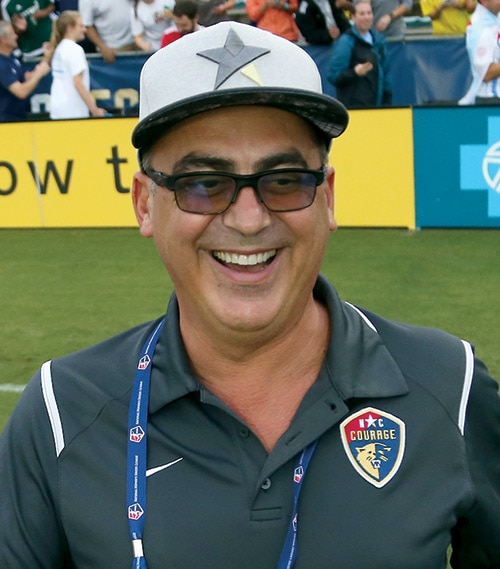 Soccer wasn’t a big deal in North Carolina when Steve Malik helped start the Kinston High School soccer team in 1978. His family had moved to Lenoir County from Wales when he was 4 years old, however, so the world’s most popular sport was in his blood.

Forty-one years later, the medical-records software industry veteran has become the state’s most prominent soccer executive, having built an organization that covers the gamut from preschoolers to professional ballers. The only missing element may be a Major League Soccer team, and he’s working on that. But Malik’s goal of landing an MLS team faces high odds because of a competing bid from Charlotte, financed by multibillionaire David Tepper, who has no soccer lineage.

While no match for Tepper’s wealth, Malik has enjoyed considerable entrepreneurial success. After earning a bachelor’s degree from UNC Chapel Hill in 1985, he worked at software ventures in Baltimore, Durham and Salt Lake City. Returning to Cary in 1996, he launched MedicalWeb.com, which developed and managed websites for physicians. Four years later, he started another software company, Medfusion Inc., to help medical clinics set up patient appointments, pay bills, refill prescriptions and make virtual visits. Medfusion’s biggest break came after the 2007-09 recession when federal legislation offered $35 billion in incentives to physicians for automating their health records.

By 2010, Medfusion had 65,000 physicians using its solution. That’s when Intuit Inc., the owner of TurboTax and QuickBooks, acquired the company for $91 million. Malik was named general manager of its rebranded Medfusion unit.

Boosted by the launch of the iPhone and the growing popularity of mobile apps, the new Intuit Health Group became Intuit’s fastest-growing unit. By 2012, it had revenue of $16 million and 11 million patient users.

But the rapid growth wasn’t as profitable as hoped, and Intuit’s strategy shifted to focus on financial information. Malik bought back the unit and renamed it Medfusion in 2013. Since then, the company has grown to 14 million users in all 50 states. Malik is now executive chairman of the company, while the chief executive officer is Kim LaBow, a former Medfusion executive who rejoined the company in 2015.

With his team in place, Malik stepped up his involvement in his favorite sport, buying the Carolina Railhawks, a minor league soccer team, in 2015 and moving the Western New York Flash professional women’s soccer team to the Triangle in 2017. The renamed N.C. Courage has enjoyed great success in the top U.S. women’s professional league, winning three championship titles. Malik chairs the National Women’s Soccer League’s executive committee and is a director of the U.S. Soccer Federation, the sport’s main overseer.

His broadest impact may be rebranding the Railhawks as the North Carolina Football Club, or NCFC, and helping engineer the creation of the largest U.S. youth development academy, North Carolina FC Youth. Nearly 14,000 players ranging in age from 4 to 19 years old are part of NCFC Youth, which has gained a national reputation for excellence with its teams regularly winning major U.S. competitions. In North Carolina, Triangle-area teams have won significantly more state high school soccer championships than their Charlotte or Triad rivals.

To fulfill his MLS dreams, Malik is partnering with Raleigh developer John Kane on a proposed $1.9 billion entertainment district in the capital city. The 55-acre Downtown South project calls for a $180 million, 20,000-seat multipurpose stadium surrounded by more than 1.6 million square feet of office, restaurant and retail space and thousands of hotel rooms and apartments.

Charlotte and Tepper have more money and corporate appeal: Several companies have committed to buy $6 million luxury suites, and 60 others have pledged to pay $100,000 in support. But Malik argues Raleigh may be better suited for a franchise because NCFC has arguably the best women’s team in the world and the largest youth academy in the U.S.; the club doesn’t compete with the Carolina Panthers, and soccer enthusiasm is rampant.

Still, the entertainment district hinges on city and county support. Malik and Kane are seeking as much as $330 million from tourism taxes over the next 25 years, which they say will help create $2.7 billion in economic activity, 5,900 new jobs, $20 million in property taxes and $3.7 million annually in tourism taxes. A poll paid for by NCFC showed 74% of respondents support the tourism tax investment. The plan is “absolutely perfect for Raleigh and Wake County,” Wake County Commissioner Sig Hutchinson told WRAL Techwire. Votes on the tax increases are scheduled within the next few months, with Malik and Kane hoping to break ground next year and complete the stadium by 2023.