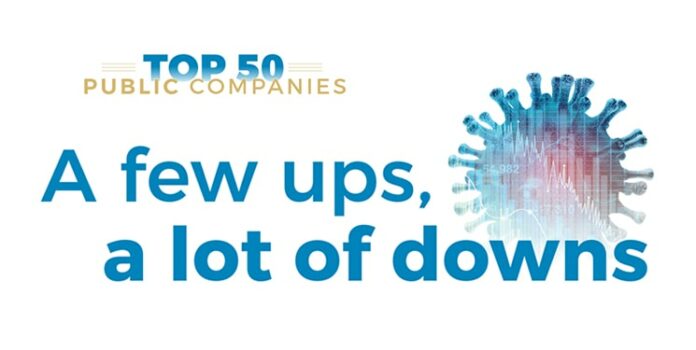 The year of the coronavirus has been a battle for many N.C. public companies.

Volatility returned with a vengeance to the stock market over the last year, and not just thinly traded small-capitalization companies, our annual look at North Carolina’s 50 biggest public companies shows. Six of the 10 biggest companies reported market value gains or declines of 20% or more over the year ending June 30, versus two in the previous year.

But that’s what happens when a global pandemic strikes during what many expected to be the final innings of a long bull market. Top performers with big market value gains included Bandwidth, up 74%; Old Dominion Freight Line, up 67%; and Qorvo, 61%.

They were the exceptions. Twenty-one of the Top 50 companies saw their values decline more than 20% over the last year, compared with nine a year earlier. The big decliners included CommScope, Aerie Pharmaceuticals and Tanger Factory Outlet Centers, which each experienced decreases of more than 45%.

This year’s newcomers include PPD, which completed its IPO in February. Ingersoll Rand was spun off from its Ireland-based parent, Trane Technologies. Paper manufacturer Glatfelter is relocating its headquarters from York County, Pa., to Charlotte later this year.

Financial data was provided by Capital Investment Cos. of Raleigh. Stock market performance is based on the June 30 market close. 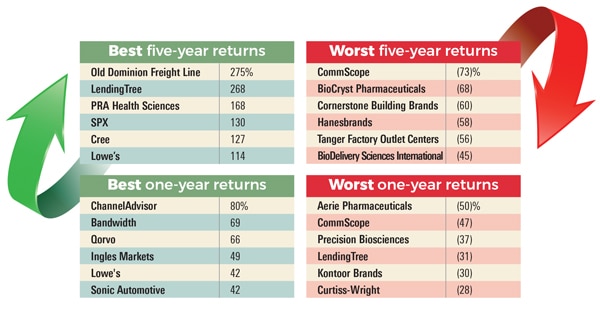 LendingTree’s Doug Lebda, who started his business in 1996 and created a leading online lending marketplace brand, tops a ranking of North Carolina’s highest-paid CEOs based on the last three years of compensation.

Lebda’s total take averaged nearly $37 million annually, mostly tied to the Charlotte-based company’s stock, which gained about 50% over the three years ending June 30. Shares shot up in 2017-18 but declined by one-third in 2019.

Business North Carolina compiled a list of highest-paid public company CEOs ranked by average compensation over the last three years, which includes base salaries, stock options, bonuses and performance-based incentives, as reported in companies’ annual proxy statements. We used two-year averages for those holding their posts for fewer than three years.

Eleven CEOs earned an average of more than $10 million per year, including Ari Bousbib at Iqvia Holdings, Bank of America’s Brian Moynihan, Darius Adamczyk of Honeywell and Duke Energy’s Lynn Good. Shares of Iqvia, a clinical research and health data company, also returned about 50% over the three years, while the other three large companies underperformed the S&P 500 Index, which advanced about 30%.

Old Dominion Freight Line was the best performing N.C. stock over the last three years, gaining nearly 170%. Gregg Gantt, who succeeded David Congdon as CEO in 2018, was paid $7.3 million in his first full year on the job.

Coca-Cola Consolidated’s Frank Harrison III and Bandwidth founder David Morken are the longest-tenured CEOs, the only executives who have led their company since the ‘90s.

Susan DeVore of Premier and Lynn Good at Duke Energy are the sole female CEOs, while Marvin Ellison of Lowe’s and Marvin Riley of EnPro are the only Black top execs. One CEO earned less than $1 million last year: James “Chip” Mahan of Wilmington-based Live Oak Bancshares. 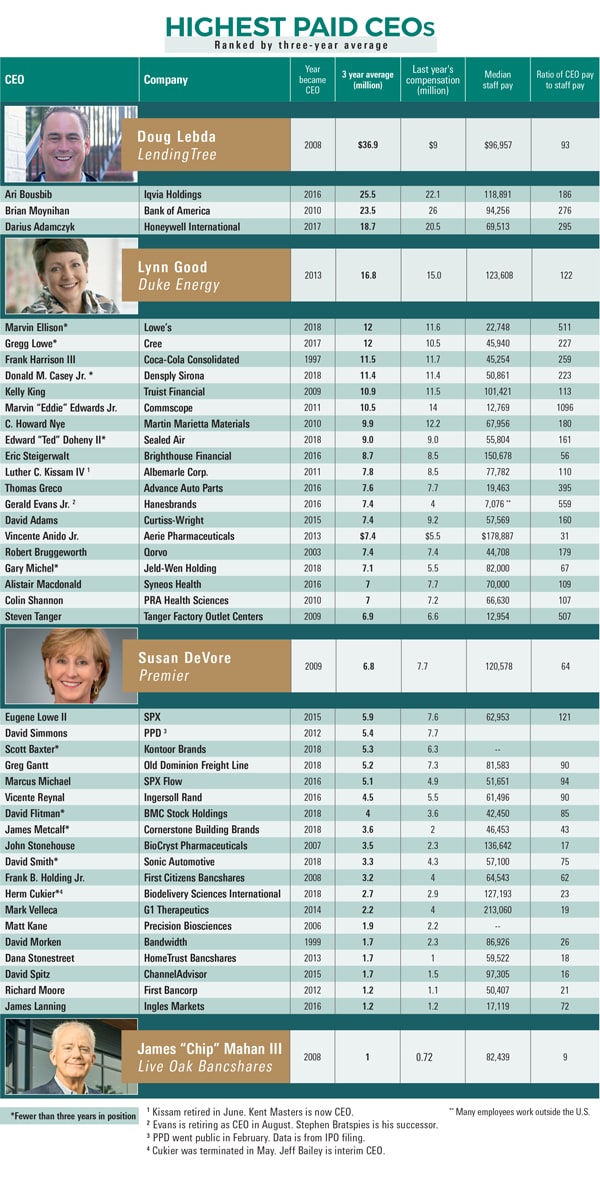