The movie that shook up Durham 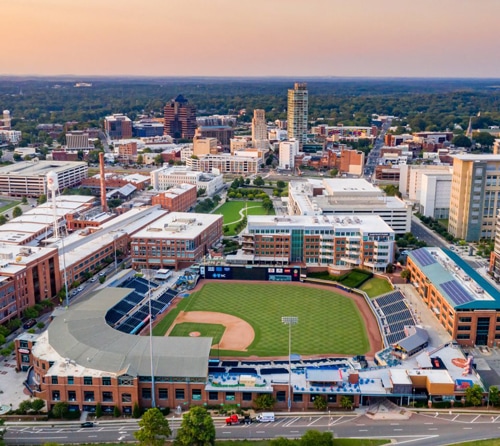 There was a paragraph inside the Charlotte Observer on Oct. 4, 1987, one of those items in a roundup of state news.

“DURHAM — A production company making a baseball movie in Durham will spend about $15,000 to make changes at Durham Athletic Park and an area house. Shooting for ‘Bull Durham’ is expected to begin this month at the park and other locations around the state.”

Of course, we now know that “a baseball movie” would become the baseball movie, immortalizing Crash Davis, Annie Savoy and their summer project Ebby Calvin “Nuke” LaLoosh, a young pitcher possessed of a million-dollar arm and a 5-cent head.

The major league baseball regular season starts Thursday. That means two things every time March turns to April.  I am uneasy about Red Sox pitching and I watch Bull Durham to get in game shape.

While I still enjoyed the movie for the 30th or so time, I realized last week they could not make it today in Durham. The movie shows a Durham of the 1980s before its economic revival.

Downtown Durham is a different place now.  It has beautiful brick and glass buildings. Abandoned textile mills and the empty tobacco buildings – the town’s unhappy signature decades ago – have been transformed into offices, restaurants and homes.

In the movie and real life in the 1980s, the Bulls were riding buses in the Class A-Advanced Carolina League.  The Durham team now is in the Triple-A  – the highest level of the minors – where a bag stays packed for a sudden call-up to Tropicana Field, home of the Tampa Bay Rays. A next-level promotion for a Bull in the 1980s would have put him in Greenville, S.C, in what was then the AA Southern League.

The current Bulls’ stadium, the Durham Bulls Athletic Park, which opened next to the Durham Freeway in 1995, is gorgeous. It is also miraculous.

Improbable things had to happen for it to replace the 1930s-era DAP.  First of all, a visionary named Miles Wolff had to restart the Bulls franchise in 1980 – the team shut down after the 1971 season.  Then a screenwriter-director named Ron Shelton, a one-time AAA ballplayer, and a Durham-native producer named Thom Mount had to decide to make a low-budget movie about life in baseball’s bush leagues.

Wolff’s Bulls were drawing well in the 1980s, but when the movie hit theaters in June 1988, the team’s popularity exploded, with merch selling nationally. The Bulls were primed for bigger things, a move up to Triple-A, but they needed a bigger, shinier venue. After county voters rejected a bond referendum for a new downtown stadium, Wolff sold the team to Jim Goodmon and Capitol Broadcasting. In 1992, at considerable political risk, the City Council approved a stadium funding plan that didn’t require citizen approval.

Maybe the next part would have happened anyway, but what followed was a burst of investment and energy in downtown Durham, as if all the attention from the movie gave investors and city officials  confidence and ambition.  The old blue-collar town started announcing its presence with authority, with a burst of growth that would double its population over the next three decades.

The empty, old buildings next to the ballpark became the American Tobacco Campus. The old Liggett & Myers buildings became West Village, with upscale residences, offices and retail.  The old Golden Belt textile mill complex was renovated. The Durham Performing Arts Center was built near the ballpark, which was also ringed by the Diamond View office buildings. And these were just the marquee projects. Fancy hotels and restaurants popped up.

Since 2000 in downtown Durham, private investment has totaled nearly $1.5 billion, and the public investment has kicked in another $640-plus million.

I got these numbers from Nicole Thompson, CEO of Downtown Durham Inc.  She told me that a couple years ago, on her organization’s 25th anniversary, they put together a presentation to show how much had changed since the early ‘90s.

“We were able to find pictures from back then, and then go and take a picture of what it looks like now. And it’s still startling to look at.”

When she travelled on business – pre-COVID, of course – she would mention in conversations on a plane that she was from Durham, and her seatmates would proceed to tell her how they were visiting Raleigh but just had to go to Durham to see the ballpark. (Occasionally they would remark how much it had changed, and she would tell them they had visited the new park, not the one on the north side of downtown that was Shelton’s set.)

So, I was watching the movie last week, and Crash has just been cut loose by the organization, his mission accomplished. Rosters expand in the last month of the major league season, and LaLoosh, finally having been mentored sufficiently and differently by Annie and Crash, was called up to the big club. Crash is walking at night in 1987 by cavernous brick buildings that are vestiges of a once-dominant Durham tobacco industry. He has the street to himself.

I thought as I watched, well that’s another thing. Today, he’d be walking through West Village and he wouldn’t be alone.

I consulted someone knowledgeable about both the movie and the town, veteran journalist Kip Coons, who worked for the Durham Morning Herald as a sports writer in the 1980s. I worked with Coons when he was at The News & Observer.  His expertise came not just from living and working in Durham before Bull Durham, but also because he was an extra in the movie.

You may remember him from his star turn early in the film when LaLoosh is being interviewed in the locker room. Coons is one of the sports writers.

Coons told me that wasn’t the real DAP locker room.  That was too small for scenes like the manager’s lollygaggers speech in the showers. The locker room was a set built in a nearby Durham warehouse.

Coons wound up in the film because he brought his son to the casting call at a local hotel. The part, it turned out, was for the little boy who shuttled notes between Annie and players in the dugout. His son was too young for the role. But they quickly realized that Coons knew how to stand next to an athlete and take notes.

Coons had two observations when we talked the other day.  First, he said the power of the movie was its authenticity.  There was a scene in the film in which the manager has to release a player who is struggling at the plate. The player pleads for more time, but the manager says no. The emotional player angrily yanks a chair across the office and storms out.

Coons was at a special showing of the film for players the day it was released in June 1988, Bulls players and members of the Lynchburg Red Sox, who were in town.

“The players were all laughing and joking during the movie,” said Coons.  “When the player got released, you could have heard a pin drop in the theater. You would have thought we were in church.  That place went quiet in a hurry, because all those guys knew, hey, that can be me tomorrow, next week. That’s when I knew he had captured it.”

Second, he spoke to the impact of the movie on Durham.  “If Bull Durham doesn’t happen, the [new ballpark] is probably not built, and you wonder if the other stuff around it gets built.

“The DPAC and all the nice restaurants over there, American Tobacco – all that stuff. Without the movie, you wonder what happens as far as Durham’s renaissance,” he said. “Does it come about? There would be questions whether it works as smoothly and as successfully as it did.”