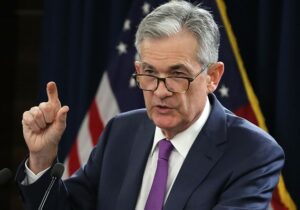 Last week Jerome Powell, President Trump’s pick for Federal Reserve Chairman, indicated the Fed will likely cut interest rates this month, despite a strong June jobs report and continued economic growth. The news pleased the president, who has regularly lashed out at the nation’s independent central bank contending the economy would be doing much better if rates were lowered. The stock market also reacted positively, the S&P 500 broke 3,000 for the first time and the Dow Jones Industrial Average is also at a record level.

At the same time, experts, analysts and business leaders are preparing for what many believe is another recession on the horizon. These conflicting views highlight the complicated – and precarious – situation that is facing our economy.

So I’d like to add my thoughts about this fascinating time. My interest in personal finance and economics comes from my father, and that interest was strengthened during my time studying business journalism at UNC Chapel Hill, where I took numerous economics and economics reporting classes through its journalism and business schools. My internship with the Dow Jones News Fund also gave me the opportunity to learn from market experts. I’m a nerd for this stuff, but if you’re reading this you probably are too. So let’s get to it.

Obama entered office in 2009 in the midst of the Great Recession. Early in his tenure, unemployment hit 10% as the banking and housing markets collapsed. By the end of his two terms, after taxpayer-supported bailouts of the banking and auto industries and massive expansion of federal debt, unemployment had declined to 4.9%,  annualized GDP growth averaged 1.6% and interest rates on 10-year government bonds were less than 2%. The policies implemented during the Great Recession potentially helped save America’s economy.

When Trump took office in 2016, the economy had nearly recovered from the woes suffered in the early 2000’s. President Trump’s policies, including corporate tax cuts approved by Congress, spurred further economic growth. GDP growth has averaged 2.6% during his first two and a half years in the White House.

As we enter the third fiscal quarter, the Dow Jones and S&P 500 are setting records, unemployment is at a 50 year low of 3.7% and the United States’ economy is continuing to post positive growth. As the president regularly notes, those signs point to a strong, robust economy. Mainstream economists suggest this is an ideal time for the Fed to raise rates to taper economic growth. But it can’t. The Fed feels the need to go in the opposite direction.

In December 2018, the Federal Reserve raised its discount rate, the interest rate charged to commercial banks and other depository institutions on loans they receive from the central bank, by 25 basis points after steady, subtle increases throughout the year. The major stock indexes tumbled to year-lows, making the central bank halt its additional planned increases. But why?

Consumer spending makes up 70% of the nation’s economy, so average households facing major debt levels doesn’t bode well. Roughly 40% of Americans have less than $400 in their savings accounts, while dealing with record levels of healthcare and student debt and rising home/rental prices. Wages have grown unusually slow compared to inflation during the decade-long recovery. The tax cuts, pitched as a way to raise employee wages, were instead mainly spent on corporate stock repurchases, increasing company ownership and inflating stock prices. Goldman Sachs says spending on stock repurchases will reach $940 billion this year, but critics say few workers have seen benefits from the tax cut.

A record national deficit of $22 trillion doesn’t help either. While a huge chunk of that debt was added during Obama’s administration to recover from the recession, $2 trillion was added in the last two fiscal years alone. The current debt to GDP ratio is 105%, versus 62% in mid- 2007, right before the financial crash.

Other recession warning signs are starting to surface. The global economy has started losing momentum. The yield curve inverted in May, meaning short-term government bonds have higher returns than long-term treasuries with the same credit quality – another major red flag as a negative yield curve is considered an indicator of a recession.

More than 80 companies set to report quarterly earnings in the coming weeks are tapering performance expectations, including Honeywell, Apple and Netflix, warning financials will be weaker than initially anticipated.

The Federal Reserve is stuck between a rock and a hard place. Raising rates may be too tough on average American consumers already dealing with heavy debt loads. Lowering rates could keep the bull market and Trump’s economic “rocket ship” going, but that would give the central bank less room to act in the event of a recession. In 2007 the Federal Reserve interest rate was at 5%, allowing a little room to stop the economic bleeding. Now they have much less room to maneuver.

Investors, analysts and consumers wait in anticipation to see how the markets will react to the Fed’s next announcement, which could very well determine the fate of the economy for our foreseeable future.