The Cherry Hotel in Wilson is set to blossom again 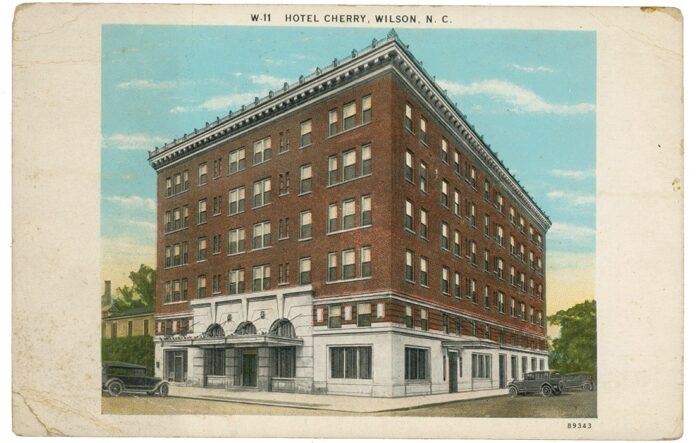 For much of the 20th century, when Wilson called itself “the world’s greatest tobacco market,” the lodging of choice was the Cherry Hotel, a six-story Beaux Arts structure constructed in 1917. Perry Como, Guy Lombardo and the Fontaine Sisters stayed there, along with tobacco salesmen and executives visiting the city 50 miles east of Raleigh. Like the city’s key industry, however, the Cherry fell into disrepair. The hotel closed in 1981, reopened as apartments for the elderly four years later, and was foreclosed in 2011.

Now, with downtown Wilson attracting interest from private investors, city leaders are pushing ahead with plans to redevelop the abandoned Cherry. About $10 million was invested downtown in the 2015-16 fiscal year, including 90% from the private sector. The Nash Street Lofts and the Wilson Furniture Lofts both opened in 2013 and provide upscale apartments. Whirligig Park, which will house the fanciful wind-driven sculptures of revered local artist Vollis Simpson, debuts next month as part of a mixed-use development that will include 88 apartments and a visitors center. A brewery, 217 Brew Works, recently opened nearby.

In 2016, the city began working with the UNC School of Government’s Development Finance Initiative to find a developer to lead a restoration of the old hotel. “They want it to become the focal point of the city,” says Rory Dowling, project manager for the initiative, which helps local governments attract financing for renovation projects. In February, the Wilson City Council considered three proposals before selecting California-based ABA Hospitality. Its plans call for retail and event space on the first two floors and a boutique hotel for the upper four levels. The developer has until Dec. 29 to deliver a comprehensive project plan, which needs a historic tax credit designation to be feasible, city officials say. Otherwise, the city could extend its option, buy the property or abandon the deal. After working with both ABA and the city, Dowling is optimistic about the hotel’s revival prospects.

TAR HEEL — Smithfield Foods will invest $100 million and add about 250 jobs at its local plant. The Virginia-based pork processor will add a 500,000-square-foot distribution center and expand its cold-storage facility. Smithfield employs nearly 5,000 people at the Bladen County site.

LAURINBURG — BlueScope Buildings North America will close its local plant, where it makes metal building systems such as warehouses and distribution centers, by January. About 76 workers will lose their jobs. The company is a subsidiary of Australia-based BlueScope Steel.

BATTLEBORO — LS Tractor USA will invest $11.5 million and add 31 jobs over five years at its local facility. The company sells and distributes tractors and agricultural equipment and is part of South Korea-based LS Group. The average annual wage will be $44,252, higher than Nash County’s $38,105.

ENFIELD — AEL Span will hire about 150 workers at the former Safelite windshield plant, which closed last year. The Michigan-based company will provide warehouse services for Cummins’ engine plant in nearby Rocky Mount.