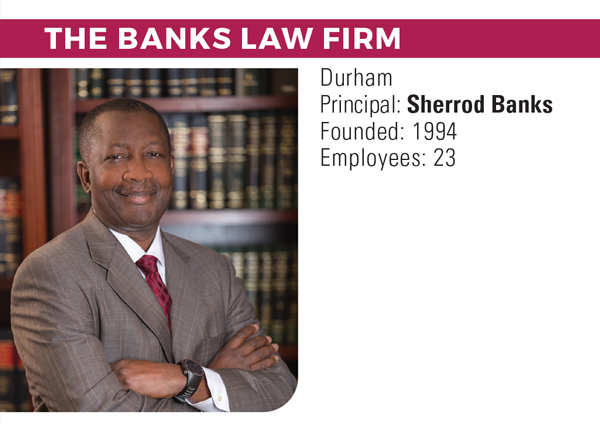 Sherrod Banks wishes there were several minority-owned law firms in North Carolina that were larger than his. “It would mean that other minorities would know it is doable and that barriers have come down.”

But for now, Banks Law Firm has that distinction, reflecting more than 25 years of effort to build a practice with 13 lawyers and a main office in Durham and satellites in Atlanta, Charlotte and Houston.

The Edenton native earned bachelor’s and law degrees at UNC Chapel Hill, then joined Durham’s Newsom, Graham, Hedrick, Bryson & Kennon law firm in 1988. The son of a teacher and a textile worker, it took Banks a while to recognize that he had some entrepreneurial instincts, having started microbusinesses such as a bike-rental business and a janitorial service while attending college. “I never saw that as being an entrepreneur. It was just a way to make money to bridge gaps.”

In 1994, he started his own firm with a focus on employment and affordable housing cases. The latter subject was an obscure practice in the mid-1990s. “I recall going to community development and housing conferences in Washington, D.C. and you could count the North Carolina lawyers on one hand,” he says.

Now, creating public-private partnerships for housing developments for residents with limited incomes has become a major focus nationally, creating big opportunities for law firms. “There’s been a total sea change,” he says. “I used to have to explain what I did for a living. But during the last presidential election cycle, they were debating affordable housing on the debate stage.”

Banks’ firm has worked with developers and community groups from Elizabeth City to Shelby and many government housing agencies including Charlotte’s Inlivian. Community development also includes stadiums, convention centers and many other civic projects, he notes. “We’ve been able to represent every interest around the table, but today it’s mostly nonprofits and private developers.”

Competing against entrenched firms is challenging, largely because personal connections are critical in many lawyer-client relationships. And Black lawyers haven’t always had similar access to the power corridors.

“It can be harder for corporate decision makers to choose you when they haven’t had a relationship,” he says. “Why take a risk?”

Fortunately, Banks says, strong relationships with long-term clients provide a bulk of his firm’s revenue and growth prospects are bright. “Completing the projects that cities and others want to have done is what gives you the personal and emotional gratification.”