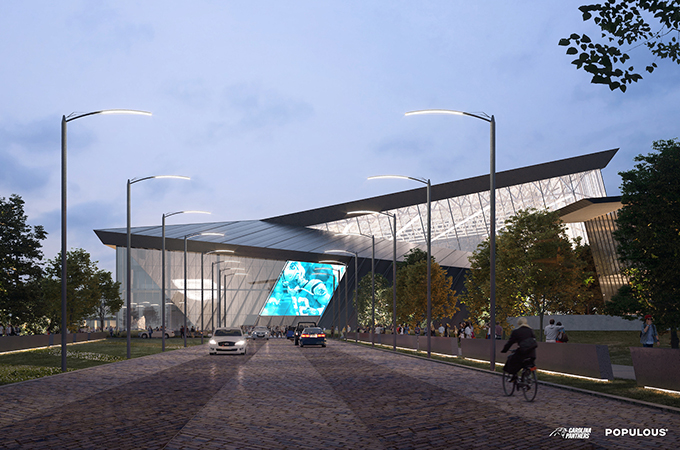 No offense to the good folks of York County, South Carolina, but did anyone really think a major office and entertainment center surrounding a Carolina Panthers NFL practice facility in Rock Hill made much economic sense?

It doesn’t to me. But S.C. political leaders classified their April 2020 agreement with Carolina Panthers owner David Tepper as the county’s biggest economic development victory ever. (For readers not familiar with the geography, York County abuts Mecklenburg County and has grown rapidly over the last 30 years in concert with the Queen City.)

Now, however, politicians like S.C. State Senator Wes Climer and York County Commissioner Bump Roddey – one of the project’s biggest promoters two years ago – question if it will get built.

Tepper promised to move team headquarters from Charlotte and pre-season training facilities to Rock Hill from its traditional Spartanburg base, in time for the 2023 season. The hedge-fund billionaire pledged to invest $500 million and hinted at plans for a mixed-use project at the site including offices, hotels, restaurants and medical buildings.

In return, the state offered $115 million in job credits and $40 million for a new Interstate 77 interchange. Then, Rock Hill and York County approved a $225 million incentives agreement in which tax revenue from the site would pay for infrastructure at the site.

It will take years for that revenue to start flowing, so Rock Hill was expected to issue bonds to investors promised timely principal and interest payments. The city council in December approved a $290 million bond issue tied to the project. They never got issued.

On March 7, Tepper halted construction on the project after spending $170 million and said Rock Hill hasn’t fulfilled its commitment. He hasn’t commented since then.

Much of the flap stems from the fact that the parties didn’t agree on a key issue: Who gets stuck repaying the bond investors should the project not work financially?

One signal that Rock Hill doesn’t think it is responsible: its comprehensive annual financial report for 2021, published in January, didn’t mention a bond issue tied to the $225 million agreement.

Tepper’s organization isn’t commenting. It’s hard to imagine he will turn his back on a $170 million investment. But it’s become a cliche to note that Tepper didn’t become a billionaire by playing nice. Should he call off the project, one assumes lawsuits would follow, with a settlement process likely to take years.

“Optimism is dwindling every day,” Roddey said yesterday. “This is starting to eat at the goodwill and good intentions of York County … If it takes six months to resume the project, we’ll lose a lot of enthusiasm.”

The controversy underscores how bond issues don’t just happen magically. They require meticulous legal work and many levels of approvals.

For example, Rock Hill’s agreement with the Panthers in 2020 cited “market studies” by JPMorgan Chase to determine the project’s potential. I asked Rock Hill City Manager David Vehaun for a copy of the studies, but didn’t hear back. Skeptics question why York officials agreed to the plan before completing the study, not afterwards

Roddey answers that they “wanted to spark some new energy in our economy, which is already on the upswing. This project offered a multitude of opportunities for years to come.”

Rock Hill Mayor John Gettys noted in 2020 that the site was producing $600 of tax revenue for the county. It was a no-brainer to approve the Panthers incentives because the property was being annexed into the city and would become a major revenue producer.

Many suspect the South Carolina officials were also intrigued by the potential of a new Panthers’ stadium in Rock Hill, replacing the downtown Charlotte venue.

Again, that never made sense to me. Bank of America, Duke Energy, Lowes and other dominant Charlotte businesses have invested billions uptown. It’s hard to imagine that they would support such a move.

But Tepper knows that many NFL stadiums are located in suburban areas. What seems like a long drive to Rock Hill for longtime Charlotteans is a minor commute for people in many bigger cities.

So perhaps the most interesting aspect of this controversy is its impact on Tepper’s hopes for major support – perhaps $500 million?  – from Charlotte, Mecklenburg County and North Carolina for a new stadium. The existing one, built in 1996, is fine by any standards except for professional sports franchises, which demand constant upgrades so that owners can charge their loyal supporters more in return for a “better experience.”

A key reason Tepper jumped at the York County opportunity is the enthusiastic support he received from South Carolina Gov. Henry McMaster, according to sources familiar with the matter. By comparison, N.C. Gov. Roy Cooper has had a more distant relationship with Tepper.

That shouldn’t surprise anyone who tracks Cooper. He has built a successful political career without cuddling up to the business community. Like many Eastern North Carolina politicians, he has never shown a passionate interest in Queen City affairs.

My hunch is that Gov. Cooper must love the increasing tension between Tepper and S.C. officials such as State Senator Climer, who ripped Tepper and asked the NFL to intervene in an interview with the Charlotte Business Journal this week. Climer didn’t respond to a request for a chat yesterday.

“I genuinely do not understand how the NFL has not intervened with [Tepper] to bring reason into this equation,” Climer told the paper. “This haphazard, unserious approach to a very serious issue is sullying the reputation of the league as an entity that someone would want to engage with in a business relationship.”

Fans know that the NFL rarely intervenes in the affairs of its owners except in the most dire circumstances. The last thing Commissioner Roger Goodell wants to do is undermine Tepper’s efforts to grab massive public subsidies for a new Panthers stadium.

As long as the battle of Rock Hill goes on, Tepper’s bargaining power with N.C. officials weakens. A lot of North Carolina taxpayers and leaders may hope that battle goes on for a long time.