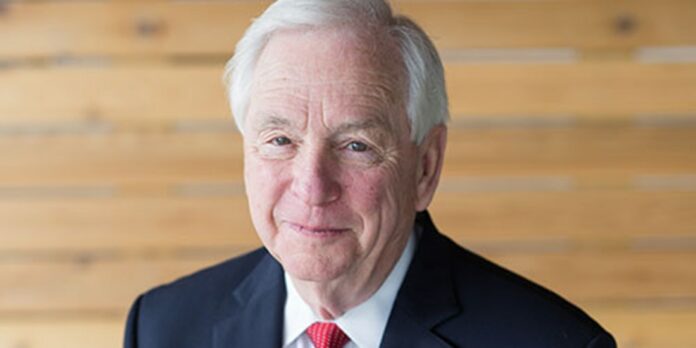 Veteran Raleigh businessman O. Temple Sloan Jr. sent a letter to Gov. Roy Cooper today urging him to set “a clear strategy to reopen the state’s economy” that enables North Carolina to recover at the same pace as the nation, if not faster.

Sloan, 80, is the former CEO of General Parts Co., which was acquired by Advance Auto Parts for $2 billion in 2014. Since then, Sloan has helped expand several private companies that employ several thousand people. The Sanford native was a co-founder of Raleigh-based Highwoods Properties, the state’s biggest real-estate investment trust, and served as a Bank of America director for many years.

The letter reflects increasing concern of many state business leaders over the economy’s rapid descent because of the coronavirus pandemic. More than a tenth of the state’s workforce has filed for unemployment benefits, Sloan noted.

Cooper has won kudos for helping the state limit the spread of the virus by aggressively promoting stay-at-home measures. State and county public health officials have reported nearly 6,900 cases of the coronavirus as of Monday night and 210 deaths. New Jersey, which has 8.8 million residents versus 10 million in North Carolina, has suffered more than 4,200 deaths.

The number of new cases is trending down in North Carolina, while 373 were hospitalized here on Monday, compared with 465 the previous day.

“The Governor and the NC Coronavirus Task Force, made up of business, health, education and other leaders, are getting input from around the state as they prepare the plans to ease restrictions, protect public health, and get our economy moving forward,” says Dory MacMillan, Cooper’s press secretary.

Asked at a press briefing last week about his efforts to aid businesses, particularly in rural areas, Cooper cited plans to add $25 million to a recovery-loan program coordinated by The Golden Leaf Foundation and the N.C. Rural Center. A previous $15 loan fund was quickly oversubscribed by state businesses. Lawmakers have since indicated they expected to add $75 million to the plan when the legislature convenes next week.

Sloan urged Cooper to partner with businesses to develop a safe recovery plan. “Businesses need to understand the protocols necessary to get back to work, and business representatives from all sectors and regions must have a seat at the table when these guidelines are being developed.” He also said the planning group should include a bipartisan selection of members of the Council of State and legislature. Some Republican political leaders have complained that Cooper has limited their involvement in setting virus-related policies.

“Businesses recognize that we cannot return to business as normal, but that we must graciously accept a level of inconvenience in order to protect employees and customers,” Sloan wrote. “Provide rational guidelines, and then allow businesses to assess their risks and take appropriate state-approved steps. The single highest priority of employers is to protect their own people.”

Each week that businesses remain closed “exponentially increases the time it will take for the economy to recover,” Sloan wrote. He said North Carolina should consider taking part in a “regional pact including  warm-climate, low density states like ours … We can get back to work and do it safely by recognizing the differences among regions and business sectors.”