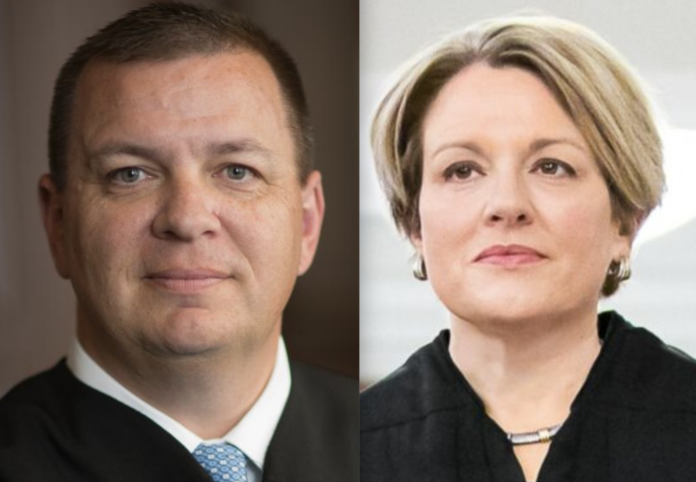 N.C. Supreme Court Justice Phil Berger Jr. isn’t on the ballot this year, but he’s taking an active role in determining which GOP candidates for appellate courts make it to the November election.

The Freshwater Smith endorsement is the most interesting because she’s running against Court of Appeals Chief Judge Donna Stroud, the most senior member of the court. Berger made it clear in a leaked Facebook message that his opposition to Stroud is less about her judicial record and more about a hiring decision he disagreed with.

Last summer, Court of Appeals judges decided to name Gene Soar as the court’s new clerk. Berger says he was the preferred candidate of the court’s Democratic judges, and that a Republican should have gotten the job instead. He noted that one of the applicants was his former law clerk.

Soar, however, wasn’t hired by Stroud alone. The court’s 10 Republicans and five Democrats voted by secret ballot on the appointment. Berger said in the Facebook message that Stroud “whipped the votes.”

Berger’s campaigning comes after a kerfuffle at the Judicial Standards Commission, where a memo said that judges who aren’t up for re-election this cycle shouldn’t make endorsements. That memo was later revised to remove that directive – around the same time that the commission’s executive director announced her departure.

Asked about Berger’s involvement, Stroud cited the state’s Code of Judicial Conduct. “In short, although judges are elected officials who must campaign, judges still have a duty to protect and defend the judiciary from inappropriate political interference,” she said in a written statement. “My primary election this year has presented unprecedented issues testing the limits of the Code of Judicial Conduct and challenging the independence and integrity of the court.”

Former Supreme Court Justice Bob Orr says the contentious primaries appear to be “a new level of partisanship,” and it’s unusual for Republicans to go after one of their own incumbents. But he notes that Democrats on the court had “hard fought” primaries in the past.

In another rare move, two PACs are getting involved in the primaries, putting out ads and mailers that support the three candidates endorsed by Berger and attack Stroud.

One of the mailers, from a newly formed group called NC For Justice PAC, points out that Stroud was appointed chief judge by then-Supreme Court Chief Justice Cheri Beasley, a Democrat. The mailer doesn’t mention that it’s common for the most senior judge to get the job, and Stroud currently serves in the job under an appointment from Republican Chief Justice Paul Newby.

NC For Justice hasn’t yet filed financial disclosures listing its donors. But forms list its headquarters as a Yanceyville post office box that is also used by Yanceyville Town Councilman Keith Tatum. Berger called Tatum a “good friend” in a Facebook post when the justice administered his oath of office in December. And Berger’s own campaign finance report shows he gave the group $4,000.

Berger also shared a Facebook post from the other PAC, called “True Conservative Judges.” It has received about $500,000 from a Virginia-based group called the Good Government Coalition. That organization, funded in the past by the Republican State Leadership Committee, paid for ads in the 2020 legislative races criticizing Democratic candidates.

Berger did not respond to an inquiry for this story.

Stroud is fighting back, contrasting her decades as a judge (including 16 years on the Court of Appeals) with Freshwater Smith, a former prosecutor who has been a District Court judge since 2017.

“I have far more appellate experience than all but one other judge on my court,” she said. “In contrast, my opponent has no appellate experience of any sort. As a District Court judge, she has no record of written opinions to assess her ability or judicial philosophy.”

Freshwater Smith’s campaign focuses on her work as a “one of the first women in North Carolina to successfully prosecute a capital murder case” who is “nationally recognized for her work in juvenile law.” She lists endorsements from three GOP Court of Appeals judges and N.C. Sen. Jim Perry, among others.

Court of Appeals Judge Richard Dietz, a Republican running for Supreme Court without a primary opponent, says he’s endorsing Freshwater Smith, Allen and Stading, but his decision was “not based on any actions by their opponents.”

“Chief Judge Donna Stroud’s experience and conservative record deserves re-election,” they wrote, while also criticizing her opponent, District Court Judge Beth Freshwater Smith. “Judge Stroud’s opponent calls herself a ‘True Conservative’ but was a registered Democrat for most of her life. She became a ‘RINO’ at exactly the moment it was politically convenient to get elected as a District Court judge.”

Next week’s primary will test the power of endorsements and incumbency in an increasingly politicized judiciary. The winner will face Democrat Brad Salmon, a District Court judge and former House legislator, in November.