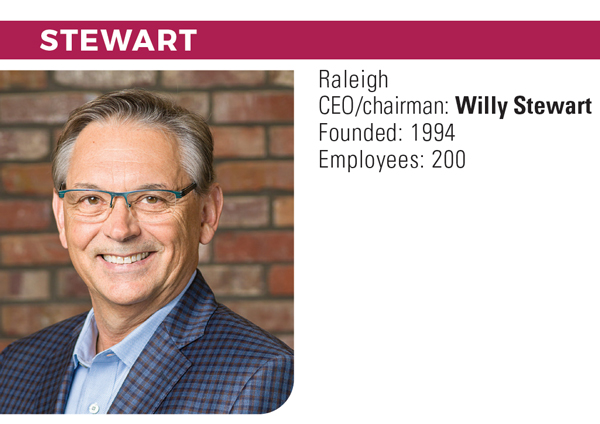 Colombia native Willy Stewart initially set out to build a small structural engineering firm, launching in 1994 with the goal of integrating architecture with each building’s structural form.

Little by little, the scope of the company known as Stewart has grown to more than 200 employees across eight offices in Raleigh, Durham, Charlotte and Columbia, S.C. It now handles a wide array of engineering, design and planning services — from land surveying to landscape architecture to transportation projects.

Stewart added specializations as it brought in new employees to help with big projects, and it’s grown from there. Stewart told Business North Carolina in 2020 that he “leads from behind.”

“I don’t want to be the face,” he said. “Stewart is not Willy Stewart. It’s an incredible group of leaders that are committed, humble and respectful and live the culture that we are promoting here.”

Stewart’s company culture is based on the acronym THREAD, which stands for Trust, Humility, Respect, Excellence, Accountability and Discipline. Employees take a two-day class on it each year, and Stewart says they “treat each other with the utmost respect, which creates a safe haven where people can bring their authentic self to work every day.”

The firm’s recent big projects include the redevelopment of Seaboard Station on the north end of downtown Raleigh, a new communications building at Elon University, the N.C. Museum of Art Park, Kane Realty’s The Dillon and Downtown South in Raleigh, as well as the Charlotte-Mecklenburg Police Department’s downtown headquarters.

Stewart grew up in Barranquilla, Colombia, where he attended a private American school that had several teachers who’d graduated from Western Carolina University. That’s how he wound up attending college in the North Carolina mountains on a golf scholarship, eventually transferring to N.C. State University because he wanted to become an engineer.
He’d hoped to return to his home country after graduating from college, but unrest there kept him in the U.S. He eventually settled in the Triangle in the late ’80s.

After decades of gradual growth, Stewart was named one of Engineering News-Record’s 500 largest design firms in the U.S. in 2019, with revenue of $32.5 million.