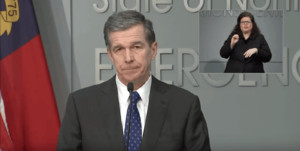 The number of hospitalized patients in the state has climbed to 29 and the total number coronavirus cases totals 636 as of today, officials said.

Cooper said North Carolinians have to be prepared for additional restrictions to be put in place but didn’t announce any new statewide measures despite pressure from health care officials.

Governor Cooper said the state shouldn’t expect the same type of peak prevalence as in New York City, which has become the epicenter for the U.S. outbreak. New York has more than 30,000 of the nation’s 65,000 cases and has reported 285 deaths from the virus.

“Clearly the city is much more dense than our population… it has more density than in North Carolina and travel patterns are different. They have a lot more public transportation than we do,” he said. “We know for a fact that when people are close together, that this virus spreads.”

Cooper believes that the state’s early actions will be effective in slowing the spread and mitigating the total impact.

North Carolina is also collaborating with other states to analyze data and create models to project the necessary number of hospital beds and when the virus will peak here.

Both national and state hospital industry officials say there is a shortage of personal protective equipment for health care providers, noting that the federal government has opted for an ad hoc process that has required each health care system to fend for itself in assembling supplies. “We’ve concluded that help is not on the way and that we’re left to find equipment with our own creative means,” Terry Akin, CEO of Greensboro-based Cone Health, said in an interview yesterday.

As a result, many N.C. hospitals are seeking donations of gloves and masks from many sources. For example, the state’s nail-salon industry provided more than 1,000 protective masks to N.C. hospitals this week after state regulators made a request for supplies, Senate President Pro Tem Phil Berger said.

Despite various challenges, Cooper says officials are diligently taking the necessary steps to arm the hospitals and ensure people are being treated properly.