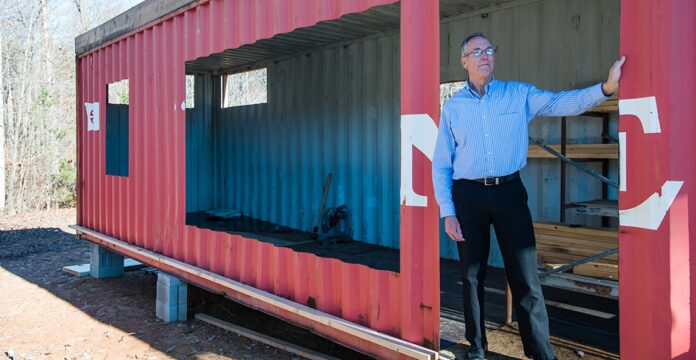 Susan Overman grew up making cross-country train trips for her dad’s job with DuPont, so the idea of a converted shipping container as a home in her golden years seems fitting.

When the two burnt-red boxes are stacked like Legos — a 40-foot one on the bottom with a half-container slanted on top — then covered with green siding, Overman will walk out of her second-level bedroom onto a rooftop garden overlooking her daughter’s 6-acre farm in Pittsboro.

Overman, 76, wants to move closer to her 3-year-old grandson. “I was lying in bed and thought, ‘It’s time for me to leave Winston-Salem. I’m tired of volunteering and not being able to say no.’” Then she had the idea: What about a tiny house?

If you think tiny houses are the domain of millennials, think again.

When John Williams presented the program “Camp Tiny House — Less is Best” in Kernersville last summer, most of his audience were gray-haired and green-minded. Williams, an Iowa native who has worked as a college instructor and in information technology, came to the movement as a retirement hobby. Now, he works full time as a tiny-house advocate, designer and consultant with business partner Kelly Rigsbee Mattocks. They run Camp Tiny House of the Triad, though Williams travels the state, preaching to parking-lot meetups at Ikea in Charlotte and groups at the Looking Glass Cafe in Carrboro.

“I see more people that are in their 50s … than young people,” Williams says. “They are waking up to the fact that they don’t want to deal with upkeep and come to the realization of how little space of their homes that they actually use.”

More older adults are shedding traditional houses. The National Association of Realtors says the median age of home sellers rose to 54 last year from 46 in 2009. The lower cost of living that comes with a tiny house — no mortgage, reduced power bills — may be attractive to the half of U.S. workers 55 and older with savings of less than $25,000 and the 26% of those who have less than $1,000, according to the nonprofit Employee Benefit Research Institute.

Tiny houses cost from $1,000 to $100,000 to build, while North Carolina homes listed for sale on tinyhouselistings.com, a website with national sellers, in mid-April ranged from $3,500 to $150,000. Steven Harrell runs the site from a 90-square-foot office in Wilmington. Website traffic has increased by 1,500% in the past year, he says, with an average of 10 new listings and 50,000 visitors a day. Harrell recently created a sister website, tinyhousepost.com, for people to share or sell tools and materials for tiny houses.

“The West Coast has always been the epicenter of the tiny-house movement,” and North Carolina is now the East Coast’s hotbed, he says.

Asheville recently hosted the Tiny House Conference, organized by movement cheerleader and blogger Ryan Mitchell, who runs thetinylife.com from his tiny house in Charlotte. Manufacturers in the state, mostly concentrated in the western region, include Brevard Tiny House, Wishbone Tiny Homes in Asheville and Blue Ridge Tiny Homes in Barnardsville.

Williams is working with a gated tiny-home community on High Rock Lake near Lexington and a 16-acre project in Davie County. Though converted shipping containers have caught on with others as the most popular medium, in his backyard in Winston-Salem, he is converting a school bus into a tiny home and constructing tree houses and “micro pods,” sheds or cubes with enough room to sleep.  On May 13, he is scheduled to appear at TedXGreensboro, where he hopes to encourage more brick-and-mortar homeowners like Susan Overman into “right-sized living.”

Overman says she will miss her Winston-Salem house with the big garden out back. “It will be sad, but it’s got to go,” she says. “Let some young couple enjoy it.”