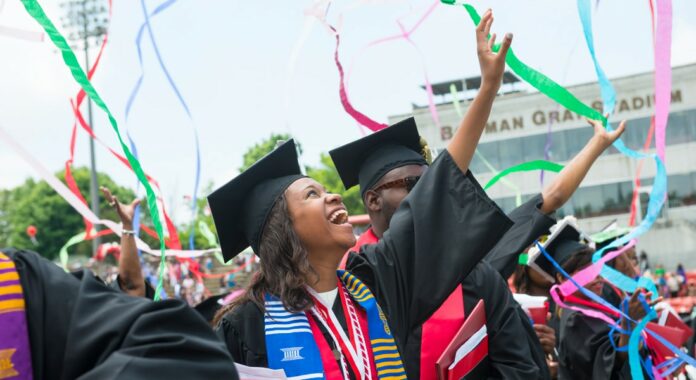 A key mission at Winston-Salem State University is to successfully guide students with limited previous exposure to higher education, Chancellor Elwood Robinson says. While only about half of new enrollees earn a degree within five years, he’s optimistic that the UNC System efforts will spark gains. It seems that everyone has been getting graded at the 17 UNC System campuses — except the chancellors who run the show. “There’s always been a lot of trust, and the universities have pretty much said, ‘We’ll spend the money. Now leave us alone,’” says Margaret Spellings, the system president since 2016. “There have been lengthy strategic plans covering everything but the kitchen sink, and you wouldn’t disagree with anything in them. But they aren’t as focused as we need them to be.”

Now, system leaders are raising the bar for campus accomplishments rather than relying on what Spellings calls “random acts of kindness.” The chancellors have signed customized performance agreements that reflect specific improvement goals developed after input from faculty, staff, campus trustee boards and the UNC System. At UNC Charlotte, where Chancellor Philip Dubois has led dramatic growth during 13 years at the helm, the five-year plan calls for graduating 30% more low-income students, growing research funding by 44% and increasing the number of students graduating within five years by about 6 percentage points, to 65%. Appalachian State University has already surpassed its goal for increased enrollment of rural students by 7% and is ahead of the plan in boosting graduations of low-income and STEM (science, technology, engineering and mathematics) students, Chancellor Sheri Everts says.

At Winston-Salem State, a historically black university formed in 1892 to teach the progeny of former slaves, Chancellor Elwood Robinson is challenged to boost five-year graduation rates by 7 percentage points to 52% and graduate 24% more low-income students. “These are things we think we can easily achieve,” says Robinson, a Sampson County native who has led the university since 2015. “These metrics are trying to make sure we can educate all of our students.” Numbers never tell the whole story, adds Robinson, who was the first college graduate in his family. The average family income of Winston-Salem State students is less than $60,000, he notes. That means an unexpected $100 expense can cause a promising student to drop out of school, he says. “We’ve always reminded the Board of Governors that there is a context to these metrics. First-generation, low-income students come in with a different perspective on higher education than those whose families have gone to college for generations. It’s up to us to give them resources they need to succeed.”

The focus on numbers coincides with a more activist Board of Governors, the 28-member body that oversees the UNC System. The mostly Republican board is dotted with staunch conservatives including former Raleigh Mayor Tom Fetzer and Bob Rucho, a former state senator who is campaigning to return to the legislature from an Iredell County district. Unlike previous boards, which have generally kept dissent behind closed doors, several current board members haven’t been shy to criticize Spellings publicly. Her work has impressed a majority of the board, which granted her a $95,000 performance bonus in March.

A former secretary of the U.S. Department of Education, Spellings says the agreements are transparent ways to keep everyone focused on key issues. North Carolina higher education has “a lot of governance and lots of bureaucracy,” she says. While each campus has a board of trustees, the UNC System board at times steps into the middle of seemingly local issues. “I’m saying, let’s be real clear, real muscular and let’s be respectful of the various authorities.”

The push for more enrollment and better on-campus success by students from low-income families is critical to the state’s future, proponents say. “Economic mobility is the defining issue of our time,” Spellings said at a Charlotte event in March. ”If you look at a map of economic mobility across the country, our region — from southern Virginia through Mississippi — is an unhappy outlier. Children born into poverty in the South have strikingly low odds of bettering their lives. In North Carolina, our metro areas rank among the very worst in the nation for upward mobility.”

To be sure, the UNC plans aren’t universally popular. Pushing more students into four-year programs is costly and won’t produce the intended results, says Jay Schalin, director of policy analysis at the James G. Martin Center for Academic Renewal, a Raleigh-based conservative think tank. No more than 30% of high-school graduates are “capable of achieving at a college level,” he says. “The way our economy is structured, the most efficient way out of poverty is not for students to attend four-year academic universities. It is better that they quickly learn skills that will allow them to earn decent money rapidly, without accumulating any debt.”

Schalin predicts the agreements will lead to lower standards, while shifting resources away from better students. “That’s hardly a prescription for excellence.”

That attitude reflects a troubling trend, Robinson says. “There is a growing movement in our nation to educate just the elite, the top 10%. But what is going to happen to the other 90%? Everyone deserves an opportunity to have the highest quality education, no matter where you come from. It’s important to provide the resources where people can be successful.”

While Spellings says she isn’t a “believer in college-for-all, and I don’t know any university president who is,” she wants North Carolina to develop more of a college-going culture. “I am a believer in education and training beyond high school for nearly everyone, whether that’s in school, on the job or through military services.”

To track progress on the agreements, UNC will unveil an online dashboard within the next few months. Asked what happens to chancellors if objectives aren’t met, grader-in-chief Spellings says it will depend on the extent of the miss.