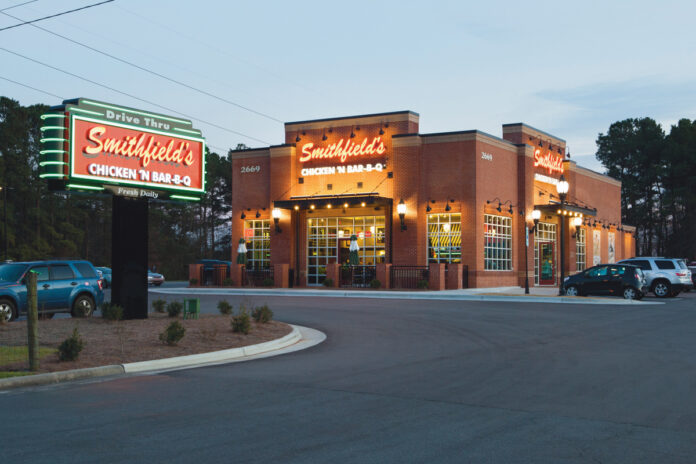 A North Carolina restaurant chain gets grilled after canceling a franchisee pact.

Like a marriage, there were happy times at the Smithfield’s Chicken `N Bar-B-Q in Leland. The town, just across the Brunswick River from Wilmington, was growing fast but maintaining its Tar Heel roots. Once a month, restored vintage cars such as ’66 Mustangs and ’55 Chevys would emerge from backyard garages set back in the pines to park with hoods open like hungry mouths in front of the restaurant that opened in 2009.

“We even make all the sauces,” Musselwhite would brag.

Over the next 15 years, the Wilmington native and UNC Wilmington graduate with a culinary degree from Cape Fear Community College, and Cheshire would expand Whiteshire Foods to include four Smithfield’s restaurants in Brunswick and New Hanover counties.

They were moneymakers, dishing up what some consider the state’s only truly native food, pork barbecue, while bearing the imprint of pork giant Smithfield Foods, which has its biggest plant in Bladen County. The Chinese-owned company licenses its name but has no other role at the restaurant chain, which is based in the Johnston County seat of Smithfield, 30 miles southeast of Raleigh.

That’s when a U.S. Eastern District Court judge awarded him and Whiteshire Foods $498,000 in a civil lawsuit, ruling that the chain, and its owners, Mid-Atlantic Restaurant Group and Cary Keisler Inc., engaged in unfair and deceptive trade practices when they terminated the Whiteshire fran-chises. Cary Keisler is a company affiliated with the chain.

The suit, says Musslewhite’s attorney, Brad Hill, contends Smithfield’s Chicken `N Bar-B-Q encouraged Whiteshire to invest millions of dollars and years of effort in the four franchises it operated between 2000 and 2014. That process of attracting loyal customers and taking necessary business risks came to naught when the franchisor allegedly cooked up excuses to end the franchise agreements and take over the restaurants.

The half-million-dollar award, Hill says, compensates for lost revenue and profit. It followed about six years of legal wrangling. Musselwhite now works in commercial real estate and as a restaurant consultant.

“The pressure to reinvest in the franchise gets greater and greater, and demands for different types of repairs, renovations and things of that nature grow until one of two things happens,” says Hill, a Raleigh-based lawyer. “The franchisee decides, ‘I can no longer make this a profitable endeavor,’ and surrenders the franchise, or the franchisor defaults the agreement and takes it back.”

Smithfield’s disputes the ruling and hopes to overturn it in posttrial rulings, says Troy Smith Jr., a New Bern lawyer representing the company.

“We’re not in a position to engage in ‘he said, she said,’ right now,” says Smith, citing the pending court challenges to the unfair practices ruling. In general, though, he says such disputes are not uncommon.

“Any significant-sized franchisor has various civil matters going on all the time,” he adds. “For every case that goes to litigation, there may be a dozen or two dozen that don’t because whatever the issue was, it gets resolved by agreement.”

Some legal and hospitality-industry sources in eastern North Carolina say the Musselwhite judgment is significant because it may spur similar cases.

Zebulon’s David Harris, who has owned 11 Smithfield’s franchises — or about 25% of the chain’s outlets —  has also filed lawsuits in Wake County. Smithfield’s terminated several locations for alleged faults such as the condition of its parking lots and drive-thrus, court filings show. The franchisor refused to renew Harris’ Havelock site last year, then terminated three more of his units in May.

Harris’ restaurant in Havelock had been open for three decades and was known for, among other things, autographed photos of the Navy precision flight team, the Blue Angels. Team members ate there while training at nearby Cherry Point Marine Corps Air Station.

The cases pit prominent players in eastern North Carolina politics and business. Smithfield’s President Lew Starling is mayor of Clinton and managing partner of the law firm Daughtry, Woodard, Lawrence & Starling. His partner, Leo Daughtry, was a state lawmaker for more than 25 years. Troy Smith is a partner of Ward and Smith and a UNC Health board member and is often cited on best-lawyer lists. Musselwhite has held numerous local-government board positions.

Nationally, the Federal Trade Commission says the pandemic has helped create strong demand for many types of franchises, along with corporate downsizings that cut loose senior employees looking to invest accumulated savings. About 40% of U.S. retail sales, or $800 billion annually, are made through franchises.

Smithfield’s is one of North Carolina’s most successful franchisors. Its 41 restaurants employ about 1,200.

The chain was founded in 1980 by Gregory Moore, whose parents, Junius and Maggie, had owned a barbecue restaurant in Smithfield. The chain parlayed blue-collar staples of fried chicken, pork barbecue, hushpuppies, slaw and similar dishes into homey restaurants. It operates 18 restaurants, while franchising the others. All but two are in eastern North Carolina; the exceptions are franchises in Charlotte and Greensboro.

Moore remains chairman and an adviser to the chain. Starling was named president in 2018, while retaining his legal practice. He was the first nonfamily member to hold the post. Neither agreed to an interview for this story.

A key to Smithfield’s growth has been its relatively affordable franchisee terms. The package involves a $50,000 fee for a 15-year pact with prospective owners required to have a net worth of at least $600,000, half of which must be liquid. That is much less than typically required by McDonald’s, Burger King or other quick-service food chains.

Also, franchisees pay royalties to Smithfield’s representing 5.5% of sales, along with 1.5% for advertising expenses.

Smith adds that franchisors such as Smithfield’s provide a recognizable brand that makes up a big part of a franchisee’s investment. Enforcing brand consistency is paramount.

“Every case is factually different, but all franchises of any kind are based on certain rights to both parties,” he says. “If you grab a burger at Wendy’s in Raleigh and then go to Greensboro, you can expect the same consistency.”  That also applies to cleanliness, upkeep, signage and other factors.

The franchisee also brings value to the deal. Robert Purvin, president of the 5,000-member American Association of Franchisees and Dealers, has practiced franchise law for more than four decades.

Franchisees are usually local and more knowledgeable about the business lay of the land, and ultimately they take all the startup risks, says Purvin, who lives in Palm Desert, California.  In the case of Smithfield’s, the buyer chooses the site —  generally an acre to 1.3 acres — and is required to work in the restaurant.

“Thankfully, most franchisors don’t mistreat their businesses, but it does happen,” Purvin says. In the trade it’s called mining or prospecting territories. “The franchisor then comes back to own the franchise if it turns out successful. The most egregious case I’ve seen is a Subway franchisee who failed inspection because there were fingerprints on the front door. You’d certainly hope so if you had customers.”

Few franchise owners have the patience or legal resources to pursue their claims, however.  “They just throw in the towel,” he says.

But Musselwhite stuck with his case that started wending its way through federal courts in 2015. It still holds lessons for today’s franchise buyers, Hill says.

“Do your homework, understand what’s out there and look for similar things over and over.” ■