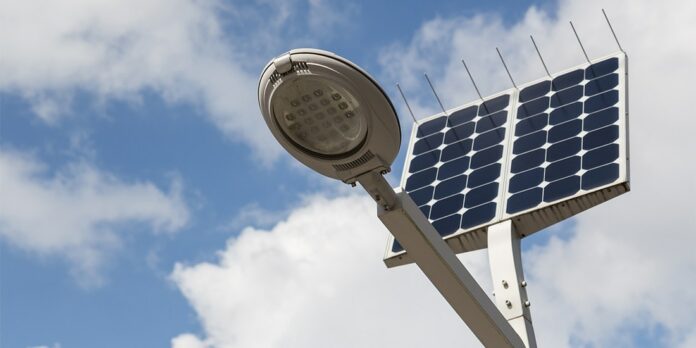 It appears almost rural, this rolling section of New Hope Road on Raleigh’s east side. There are no smokestacks, though it’s dotted with light industries, building-supply distributorships and other businesses. One is a modest metal building behind a thin row of roadside trees.

“I like running companies I can feel good around, and not just to make money,” says Dan Robertson, who with partner Buck Wingo and two other investors created Progress Solar Solutions LLC in 2008. Of course, the company makes money. It has grown by double digits every year.

Progress Solar manufactures high-intensity light towers that illuminate highway projects, construction sites and sporting events. During the daytime, the lights recharge themselves from the sun and wind. Some hybrid models use supplemental generators powered by propane and other fuels.

The company is on the advanced edge of renewable-energy technology and at the heart of North Carolina’s nearly $100 billion annual manufacturing economy. It also holds another distinction rarely noticed by the public, politicians and industry recruiters: Progress Solar has only 20 employees.

Many smaller manufacturers, such as Outdoor Quests Second to Nunn LLC in Statesville, find symbiotic roles with larger companies. Family-owned and with five machinists, the 5-year-old company does gunsmithing but also precision-metal machining for NASCAR teams and other customers. While there’s no firm definition of small, says David Rhoades, communications director at N.C. Department of Commerce, high-profile manufacturers such as Honda Aircraft Co.’s HondaJet plant in Greensboro, with more than 1,700 workers, are far outnumbered by their smaller peers.

In Raleigh, Robertson had spent about 25 years in medical-device manufacturing. “I decided I wanted to get out on my own in an industry in the renewable-energy business.” One investor sold his share soon after the business was created and a second sold in 2013, but all had industry backgrounds and were able to self-finance the startup. “We did this bootstraps, from start to finish,” Robertson says, “but when we started in 2008 and 2009, there were some pretty rough times.”

Despite starting in a deep recession, Progress Solar displayed another common characteristic of small manufacturers. “You really have to find a special niche,” Mintz says. “When things get to be a commodity, they tend to go overseas, and it’s hard to stay in business.”

The private company doesn’t divulge finances, but the portable light towers typically sell for $19,000 to $35,000. Robertson says the company has sold “thousands” since its inception.

With marketing advice and leads from the federal and state commerce departments, Progress Solar signed the biggest customer of all — the Pentagon — along with huge equipment-rental companies such as Sunbelt, entertainment venues including Disney, and sports leagues such as the PGA. Customers now include the U.S. Border Patrol and oil and gas industries. Days after Hurricane Harvey, Progress Solar landed a Texas contract.

Progress Solar’s niche was low-maintenance, sun- and wind-powered lights when the market standard was diesel-powered. Each tower contains as many as 400 components, from wheels and tires to solar panels and storage batteries sourced from multiple suppliers. “This is probably for small manufacturers the toughest thing, from a cash-flow perspective,” Robertson says. “It’s expensive to build our product, plus demand is seasonal,” high in construction-friendly summer, less in winter.

Though small manufacturers face their own set of challenges, Mintz and Robertson agree that they share one thing with their giant counterparts: Difficulty finding skilled manufacturing workers. “Old manufacturing might be dead, but manufacturing itself is very much alive,” Mintz says. “It’s just not what people are used to seeing in these plants with thousands of employees. A lot don’t look at it as a viable career path. We need to get past the notion that we can all sell hamburgers to each other to make a living.”