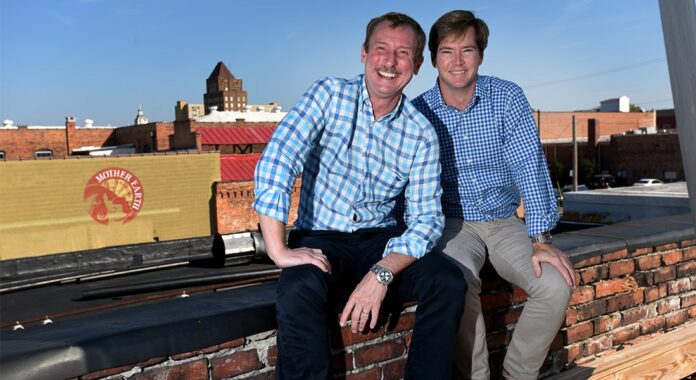 2016 SMALL BUSINESS OF THE YEAR RUNNER-UP:

Trent Mooring (pictured right) and Stephen Hill, surely the most compatible in-laws east of Interstate 95, were sharing a Red-Eye, a combination of craft beer and homemade tomato juice, when they hatched the idea of a brewery in their hometown.

Kinston as a food-and-drink destination seems as natural now as … tomato juice and beer? But it might have been laughable then, in 2008. True, Vivian Howard had already opened the brewery’s more famous neighbor, Chef & the Farmer, about a block away, but A Chef’s Life, the PBS television show that put the nationally celebrated restaurant on the map, was five years into the future. Tobacco was once king here; now, Southern food reigns.

Mother Earth these days is a taproom, trading post, beer garden and working brewery — much of it powered by solar energy — encompassing most of a city block in downtown Kinston. Its size would be a stretch even in larger cities, but such a venture in a town shy of 22,000 people in far-flung eastern North Carolina could be considered downright adventurous.

Staying true to your roots, it turns out, pays off.

Mother Earth Brewing expects to double revenue next year with the expansion of a sister business, a distillery called Mother Earth Spirits, and the opening of the Mother Earth Motor Lodge. The distillery is on track to sell 1,346 cases this year, while the brewery is expected to produce 7,000 barrels, the magic number that put the brewery into profitability last year. It’s far smaller than the 50,000-barrel capacity of the state’s biggest craft brewer and Business North Carolina’s 2014 Small Business of the Year, Highland Brewing in Asheville, but Mooring and Hill have never been concerned about how fast or how high they can fly. Making the best beer and improving their corner of Kinston are what motivates them. “We’re just having a bunch of fun,” Hill says.

After a month piloting a delivery van — and one trip to Raleigh with kegs in the trunk of Hill’s 1970s Lincoln limo — he and Mooring hired a distributor. “It’s two different animals,” Mooring says. “We’re either a brewery or a distributor.”

Mother Earth beer can be found in only two states: Georgia and North Carolina, where the brand is in the top three of Charlotte-based Tryon Distributing’s most popular beers. Mother Earth has captured a World Beer Cup medal, 17 medals at the U.S. Open Beer Championship and two awards at the Great American Beer Festival. Daniel Hartis, a Charlotte writer for All About Beer magazine, says Mother Earth has a reputation for innovative seasonal beers that complement the brewery’s five year-round brews.

Each Mother Earth bottle or can is ringed by a label that was painted by Mooring’s grade-school art teacher. She paints them based on photographs of favorite family spots: The beach, a scene of his three daughters dancing by a campfire and Hill’s garden inspired Tripel Overhead, Sisters of the Moon and Homegrown, the tomato ale that launched the business. Even the playground slide he and Mooring enjoyed as children growing up in Kinston found its way into the brewery — it’s the most direct route from their second-floor offices to the brewing floor below.

Though they are father- and son-in-law, a mere 15 years separates them. Mooring, who married Hill’s oldest daughter, Caroline, is 40. Hill is 55. “He’s grayer than I am,” Hill says, pointing to Mooring’s thick head of hair.

U.S. beer drinkers have an estimated 30,000 different choices from more than 4,000 brewers, compared with about 20,000 beers from 2,000 brewers five years ago. The N.C. Craft Brewers Guild says North Carolina has the largest share in the South, with more than 180 breweries and brewpubs, including several in eastern North Carolina such as Duck-Rabbit Craft Brewery in Farmville, 30 miles north of Kinston. Mother Earth is a relative old-timer at age seven. But Mooring says the brewery won’t rush into new markets. “We always brewed at a pace we were comfortable with because Stephen and I both said we don’t ever want to go to a market and be out of stock,” he says. “We’re going to grow at our pace for the best representation of our brand.”

That doesn’t mean Mother Earth has slowed down. Between building a new downtown location for Mother Earth Spirits, Mooring and Hill are involved in a slew of sister businesses, including a hotel, restaurant and music venue. Those were started, in part, because Hill couldn’t stand to see decaying buildings in his hometown. The brewery itself was once “the ugliest building you’ve ever seen,” says Hill, whose family’s wealth stems in part from its Kinston-based nursing-home chain and insurance business, operated under Hillco Ltd. Now, with its signature, swirling red-and-white logo on the outside, it’s one of downtown Kinston’s most recognizable properties.

“Their desire to make Kinston a destination, you can tell it’s genuine,” Hartis says. “They could have brought their brewery anywhere and do just as well, but to stay … in Kinston shows they care about their community.”