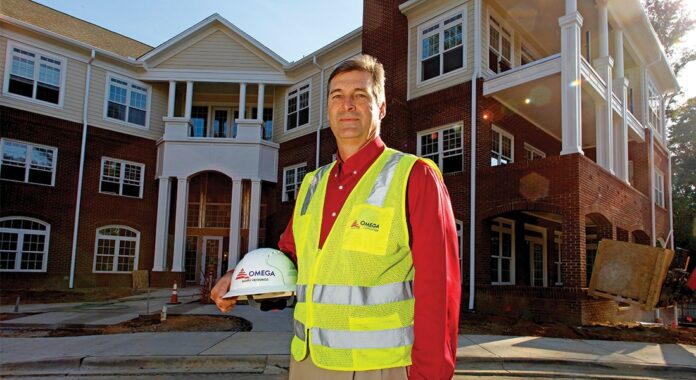 2016 SMALL BUSINESS OF THE YEAR RUNNER-UP:

While recovery stories from the real-estate depression have become common fodder, Barry Hennings’ rebound stands out.

In late 2011, he was in his second year as president of general contractor John S. Clark Co. when its parent, Obayashi USA LLC, said it would divest the Mount Airy-based company amid the global contraction. When Hennings led a group offering to buy Clark, one of North Carolina’s largest builders, the Japanese-owned firm said no thanks. No reason was offered, and Hennings still doesn’t know what motivated Obayashi, which had acquired Clark in 2006. Started in 1958, Clark at its peak had more than 300 employees and annual revenue of $350 million.

The closure, which affected about 100 remaining staffers, was bitter news for Hennings, who had worked for Clark since 1984 and whose father, Joe, was president from 1990 to 2001. “After 27 years, it was a disappointment,” Hennings says. “Obayashi was a $14 billion company, and they had a lot of other issues they were dealing with. But we never did understand.”

The disappointment didn’t last long. Hennings had been discussing options with Paul Covington, owner of a small Pilot Mountain-based construction company that specialized in building hotels and churches, to gauge his interest in joining forces. (Pilot Mountain is 12 miles from Mount Airy.) Few if any hotels were being built at that time, and Covington was open to combining his business with Hennings, who had focused on strip shopping centers, supermarkets, distribution centers and warehouses.

The duo clicked, and Omega, which had 12 employees, added 50 former Clark staffers picked by Hennings. “It was a good fit because there was no overlap in our businesses,” says Chad Mot-singer, a vice president who has worked at Omega for 18 years.

On Hennings’ first day, the company pulled two new building permits. “We brought a book of business, and we were able to hit the ground running,” says Hennings, who as president works closely with Covington, 69, who started Omega in 1975 and remains CEO.

Four years later, Omega has added a dozen employees and more than tripled revenue, which is expected to total about $75 million in 2016. The company has seven engineers and 14 project managers.

“Our target when we started was $100 million a year, which is what we thought we were capable of doing given our size,” says Hennings, who like his father is an N.C. State University engineering graduate. “We’re now in the $75 million to $80 million range, and I see some growth coming, but we’re not going to grow for growth’s sake.”

Rising labor costs make bidding tricky for general contractors, who typically share at least 70% of their revenue with subcontractor specialists. “It’s a very difficult time to find workers because a lot of people left the business in the last recession.”

Omega has benefited from a stronger economy and rapid population growth in the Carolinas, Georgia and Virginia, where it does 90% of its business. Expansions by supermarket clients, including The Fresh Market and Publix, have helped. Hennings had overseen construction of about a dozen Publix stores in Georgia and South Carolina a decade ago, developing contacts that paid off when Omega won the contract to build a New Bern store. Hennings expects more projects with the fast-growing Lakeland, Fla.-based grocer.  Other notable North Carolina projects include expansions at Charlotte’s Sharon Towers retirement complex and textile maker Unifi’s plants in Reidsville and Yadkinville; an LA Fitness gym in Winston-Salem; and Hampton Inns in Boone and Asheville.

Its biggest project, which opened in 2015 and totaled $50 million, is a countertop manufacturing plant in Savannah, Ga., owned by Israel-based Caesarstone. That assignment prompted Omega to open an office near Savannah in September, its first outside Pilot Mountain, where it has a staff of 23. The goal is to grab more projects in Charleston, S.C., Jacksonville, Fla., and Savannah.

Having seen Clark tank under Obayashi, Hennings wants to maintain Omega as an independent company for years to come. That’s an attribute of the company because many small businesses have difficulty expanding beyond 50 employees, says Joan Siefert Rose, president and CEO of the Council for Entrepreneurial Development in Durham and a judge for this year’s Small Business of the Year competition.

Omega “is thinking ahead about leadership transition,” she says. Seven managers own stock in the business with control expected to change over the next decade, Hennings says.

“We were still in the recession when we started at Omega, but we knew we had a good group of people and that if the work was out there, we’d be able to get our share.”