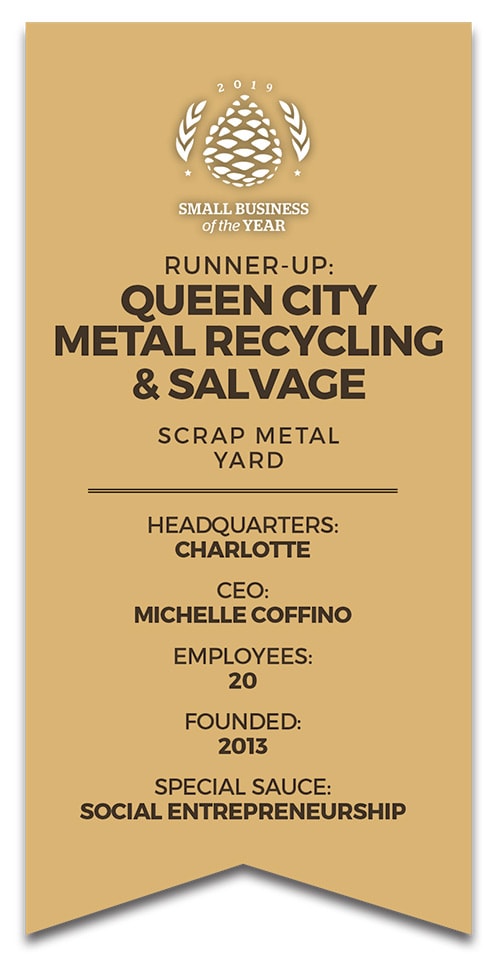 Michelle “Mickey” Coffino is a study in contrasts. She’s a woman who owns a scrap-metal yard that buys tons of used auto and electronic parts and other industrial material every month. Queen City Metal Recycling & Salvage is part of an industry 99% dominated by men.

She also owns MC3 Salon and Wellness Center in Charlotte’s Midtown neighborhood, cutting hair 30 hours a week during mornings and weekends, overseeing six colleagues. She works afternoons and nights at her salvage business in an industrial area north of downtown.

The 53-year-old entrepreneur is also a crusader for giving formerly incarcerated men and women a second chance. The scrapyard came first, but the idea to employ ex-offenders followed soon after. Of her 20 employees, “all but two or three have records,” she says. Some were violent offenders. Others, including a former attorney, were convicted of white-collar crimes.

The metaphor isn’t lost on her. “Recycle metal to recycle lives,” she says. “No one should be punished for the rest of their lives for a two-minute mistake.”

Her businesses pay the freight, but Coffino prefers talking about her pet causes of prison reform and mental health. “I work to make a difference,” she says, “not to make money.”

Yet, she’s displayed business prowess. She bought the company in 2013 when revenue was about $1 million annually. Within three years, Queen City Metal topped $15 million by adding both industrial clients and individuals she calls “peddlers,” who drive through buying various metals. The business has shrunk in the last three years as scrap prices have plummeted due to China’s slowing growth and less competition among the steel companies that buy metal from recyclers, she says. Revenue dipped to $8.5 million in 2017 and $6 million last year.

Her business career started when she began styling hair at 17 in Los Angeles’ Hollywood neighborhood. She moved to Charlotte in 1994 because she didn’t want to start a family or raise children in California. Among the many hats she wears, Mickey Coffino is also a single mom. She has triplets who are now 23: a daughter who runs social media for Queen City Metal and who lives with mental illness; a transgender son; and a son who’s a recovering heroin addict. All three are now thriving, she says.

Coffino says there shouldn’t be any stigma associated with mental illness, addiction or incarceration. “You’re only as sick as your secrets. So, I don’t have many.”

Seeking a reliable income source beyond the salon, she learned from a client that a Charlotte scrapyard was for sale. Aided by a $1.9 million Small Business Administration-backed loan, she bought it. Four years later, she restructured into a 10-year fixed-rate loan through Wells Fargo & Co., according to a story about her business in an internal bank publication.

Since she bought Queen City Metal, prices paid for scrap metal slumped from 11 cents a pound to as little as 2 cents. “Even with the resulting decline in revenue, I could tell she knew what she was doing,” Chris Underwood, a business banking relationship manager at Wells Fargo & Co. who has worked with Coffino, told the publication. “She was not only able to survive that downturn but also grow assets and pay down debt.”

Coffino’s usual routine is to arrive at her salon by 7 a.m., then hit the scrapyard by noon. She usually works until 6:30 p.m., then heads for the gym. Often, she returns to the office.

James Russell, 63, found his way to Queen City Metal through Goodwill Industries’ 2nd Chance program for former inmates. He came to his job interview expecting to be rejected. “As an ex-offender, you get turned down a lot,” he says. “I was prepared to give a long speech.” He began by saying, “I’ve got a past.”

“Mickey said, ‘So?’” And that was that. His work is “a little bit of everything — from directing customers to keeping the yard clean.”

Beyond hiring formerly homeless people, Coffino buys their stuff. “I’m the only scrapyard in Charlotte that will take recyclable metal from people who aren’t in a car,” she says. Cars are also among the items she accepts.

“Some of my best customers come here with buggies. This is a way for them to be entrepreneurial. They’re so proud to come here with a cart of aluminum cans that will net them $3.”

The U.S. prison system generates more than $74 billion a year in revenue with limited results, Coffino says. A lot of returning vets end up in prison, and Coffino says many don’t belong there. They need to be treated for mental illness — not locked up.

North Carolina spends $40,000 a year for each incarcerated person. “Can’t we use that money to educate?” Or for job training? “We expect people to come out of prison with a job and a place to live.”
She provides both, having bought five rental homes to lease to her staff. “I facilitate a home-like environment for people who cannot rent either a room or a home due to their prior convictions or felonies.”

Her work is attracting national attention. She’s on the recently formed women’s council of the Institute of Scrap Recycling Industries and speaks nationally about her industry, hiring ex-inmates, and mental health. In 2017, the U.S. Small Business Administration named her the state’s Small Business Person of the Year.

She’s honored by the trophies, plaques and certificates in her office, she says. But their display is meant to promote her message to a larger audience: A salvage yard can mean salvation for everything from cans to cars to the formerly incarcerated.