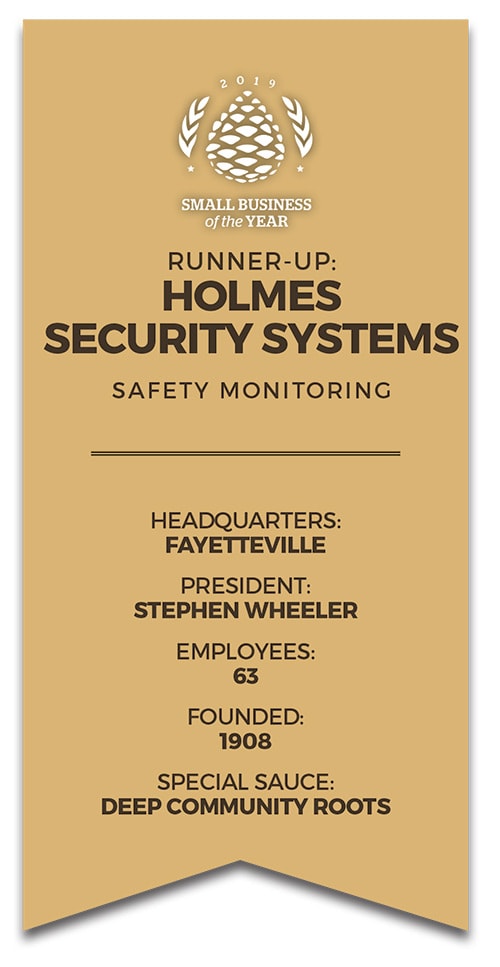 During the summer when Stephen Wheeler was 14, his dad told him to join his brother on a project for the family business, installing a simple security system on doors at a Fayetteville-area school. “My brother, who was 18, said, ‘Here’s a drill, here’s a screwdriver and here’s a switch that has to go on the door. I’m going to run the wire. You make it happen.’”

At the time, Wheeler says, “I didn’t know what a drill was. It took me three hours to do that one door, but I figured it out. There were 60 or 70 doors at that school, and we did every one of them.”

Nearly five decades later, the school remains a customer, reflecting a long-term approach that has made Holmes Security Systems among North Carolina’s largest providers of home and business alarm-monitoring services. Its success prompted judges to rank the 111-year-old Cumberland County business as a finalist in Business North Carolina’s annual Small Business of the Year competition.

Wheeler, 60, is the third-generation family leader of the company, which started in 1908 when his grandfather, Oliver Wendell Holmes Sr., opened an electrical-contracting company. Among his first projects was leading the installation of electric- trolley lines along Fayetteville’s main downtown drag, Hay Street. While the city eventually took control of the trolley business and still runs the city’s electric-distribution network, the Holmes family continues to make a big mark on Fayetteville.

Oliver Holmes Sr.’s son-in-law, J.D. “Luke” Wheeler, joined the company in 1950 and transitioned it into a retail business that was famous for same-day home delivery of new appliances, long before Amazon.com was even a whisper. The Hay Street business later evolved into a general store that sold everything from crystal giftware to shotguns.

Beyond retailing, Luke Wheeler took an early interest in home-alarm systems, putting one in his own home and starting a division in 1967. His son, Stephen, accelerated the effort upon joining the company in 1980 after studying business administration at UNC Wilmington. He became president in 2002, a year before his father died. His mother is still involved in the company.

The family stopped selling appliances in 2003 and closed the gift store in 2013, driven by retailing consolidation that knocked out most local operators. But Holmes has grown into one of the state’s largest companies of its type while operating from the same downtown Fayetteville spot as its predecessor gift store. Holmes added a Wilmington office in 2000 that has been a big boon. Most of its revenue comes from a 100-mile radius of the two southeastern N.C. cities, with sales almost evenly split between residential and business customers.

“Our business is good, and it’s just a matter of pacing and not growing so fast that you can’t control it,” Wheeler says. “As long as there is crime, we’ll have business because there’s always a need for security.”

Revenues have consistently grown by 10% to 15% annually over the last decade, while last year marked even faster growth, Wheeler says. Much of the recent gains stem from increasing customer demand for camera-monitoring services, which make up 40% or more of sales. “You can’t have a small business today without a camera system,” he says. “And you can’t go anywhere today without being on camera.” Holmes’ largest customer has 2,200 cameras at multiple sites, while some small-business clients have only two.

Like many industries, security services have changed dramatically because of technological advances. For years, Holmes sold systems that cost as much as $3,000. But over the last decade or so, initial installation prices have slid to $200 or so, while the cost of maintaining the service ranges from $20 to $70 per month. Its products sold to corporate customers are mostly made by Charlotte-based Honeywell International Inc., while the residential systems come from Austin, Texas-based Resideo Technologies, which was spun off by Honeywell in 2018.

“I don’t make money by selling parts like I used to,” Wheeler says. “Now I make it by selling all the services that we provide from monitoring to controlling what’s happening in your home.” While Holmes’ initial sale inevitably involves front-door security, its services also now connect with thermostats, lighting and cameras. In the future, the company is likely to be even more involved with other home-automation projects, including water heaters and entertainment systems.

Security has long been a target for the giant cable companies, which want to add the service to their phone, video and broadband bundles. But regional operations such as Holmes and Charlotte-based CPI Security Systems Inc., the state’s largest, still dominate because of the customer-service focus. “You can’t wait three days to fix somebody’s security alarm,” Wheeler says. “You really have to have same-day service to take care of your customers.”

Likewise, the smaller businesses have outlasted efforts by The Home Depot Inc., Lowe’s Cos. and other big retailers selling do-it-yourself home-security systems, says Dave Foster, Holmes’ sales and marketing manager. “They started in the business two or three years ago but they’ve gotten out,” he says, frustrated by state licensing rules and changing technology. “Things change so fast that people really don’t know how to install the equipment. If you put a motion detector in upside down, it won’t do you any good.”

The Holmes-Wheeler family’s success reflects a skillful adaptability to change with the times, says Lonnie Player Jr., a Fayetteville lawyer whose family has done business in the city since the 1930s. “They’ve got good, solid business minds. Steve is a very smart man, and his son, Luke, will do a fantastic job running the business someday.”

Indeed, Steve Wheeler has no qualms about expecting Luke, 33, to become the fourth generation to oversee the business. Luke, who worked briefly for the N.C. Department of Transportation and sold cars before joining his dad, helps oversee the company’s more sophisticated business-networking jobs.

“Luke’s generation is leading the technology change in which everything is being controlled on one’s phone,” Steve says. “Just like I took our business in a different direction than my dad, I’m sure he will also take a different direction, and I’m confident he’ll be successful.”