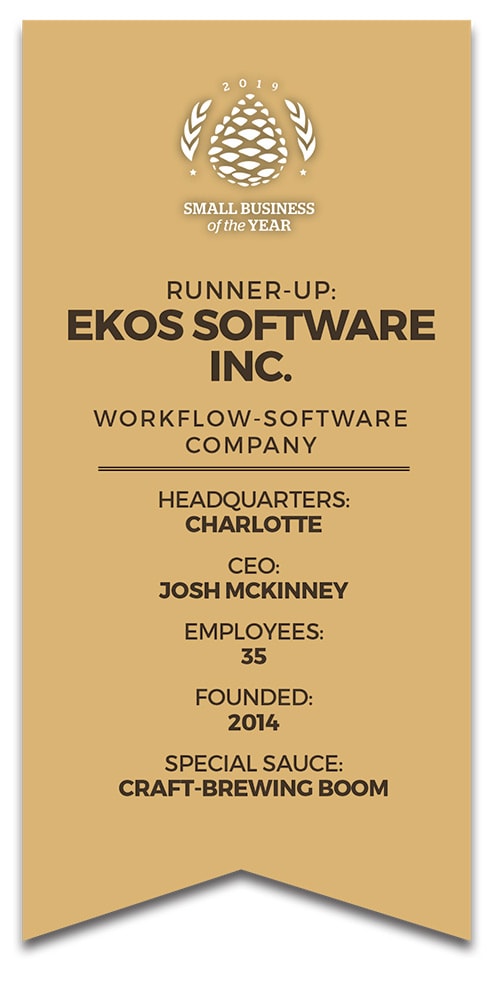 It started with a message on LinkedIn. “Hey, I think we’re working on the same thing and might be competitors some day, maybe we should team up to make this happen?” Greg Forehand wrote to Josh McKinney, 34, who is now the CEO of Charlotte’s Ekos Software Inc., which targets craft food and beverage companies looking to streamline their workflow.

McKinney and Forehand, both craft-beer aficionados with tech experience, realized many startup beermakers knew more about suds than how to run a business. The beginning brewers often had little understanding of how to efficiently track production.

McKinney, who graduated from Appalachian State University with degrees in information systems and business management, developed software for a couple of companies and nonprofits in Charleston, S.C., before moving to Charlotte in 2010. Shortly after, he began speaking with different area brewers about their production and tracking processes. He found large enterprise resource-planning software offered by industry leaders such as Salesforce.com Inc. was too expensive and complicated for smaller breweries. The only real alternative was keeping physical records on paper, spreadsheets and whiteboards.

“With a software background, seeing all the whiteboards gave me serious anxiety,” McKinney says. “Accidentally brushing up against it could erase an entire month’s schedule.”

He began shopping around the idea of a software program that could track the entire craft process, from inventory and production schedules to accounting and tax records. At the same time, Forehand, an Army veteran and graduate of Alabama’s Jacksonville State University with a degree in computer science, was reaching out to Charlotte brewers about a similar product that his TechStructures LLC software company was developing. When McKinney’s name kept popping up with different brewers, Forehand, 48, made contact, and the two joined forces in April 2014 at Ekos, which spun out of Forehand’s company.

McKinney focused on business issues while Forehand handled the main architecture for what would become their flagship product, Ekos Brewmaster. Software development was handled in-house. The duo stayed in Charlotte because of its expanding tech market, growing number of breweries and central location in North Carolina.

“We built it from the ground up. It took a lot of blood, sweat and tears,” McKinney says.

By targeting small- to medium-size businesses, Ekos hopes to help make them more competitive with big food and beverage companies, McKinney says. “A lot of craft companies don’t see national or international markets. They’re focused on local production, giving back to their community and connecting with customers at tastings or the farmers market.”

The company launched Ekos Brewmaster in April 2014, expecting little fanfare after sending a release to Charlotte breweries. But Brewbound, a prominent U.S. craft-brewery website, wrote about the product, prompting calls from brewers nationally seeking information about the product.

By the end of its first year, Ekos had nearly 100 clients. Five years later, the tech firm has about 1,700 clients in 50 states and 45 countries. All signed on after hearing positive reviews or attending one of Ekos’ roadshows, which started in 2016 as a way to show off their product and share tricks of the trade.

Revenue initially grew 100% year over year, then slowed to a still-blistering 60% pace in the last few years, McKinney says. He declined to be more specific about Ekos’ finances.

Last year, Ekos added product offerings customized for cider, wine and other craft production, including companies that make chocolate and kombucha. The additions expanded its target market from 9,000 firms to 150,000. Ekos will add another platform for craft-spirit distillers later next year, McKinney says.

In October, Ekos secured $8 million in its first financing round led by Atlanta-based venture capital firm Noro-Moseley Partners. The money will be used to add staff, which is expected to double from 35 to 70 by the end of next year, and continue product development and client support.

He’d previously had the same role at Charlotte-based MapAnything, which raised $75 million before its April sale to Salesforce.com Inc.

“It’s about getting the right people in place to help the company grow,” McKinney says. “Our goal isn’t to get acquired. Our goal is to grow and develop the market as much as we can.”

Increasing consumer preference for locally grown, sourced and produced goods suggests great growth potential, Ekos officials say. There are about 300,000 craft-food and -beverage companies in the nation, and more are constantly popping up, McKinney says. Craft-beer sales make up 24% of the nation’s $114 billion beer market, including beverages produced by some large, international companies, says the Brewers Association, a Boulder, Colo.-based trade group that represents thousands of independent brewers.

Ekos is “by far the industry leader” for craft-brewery production software with more than 15% of brewers using their products, according to McKinney. “The opportunity is so big, we want to take advantage of that and grow as much as we can.”