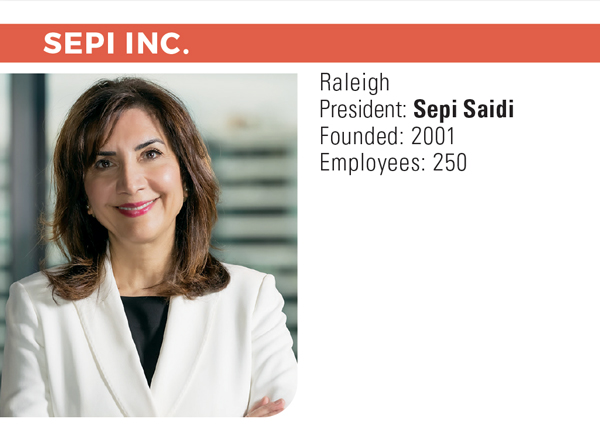 Construction stereotypes cast architects as mold-breakers and margin-pushers. Engineers build. Sepi Saidi’s multifaceted firm — created two decades ago — defies those preconceptions. In the process, it has become a standard-bearer for women-owned enterprises and immigrant entrepreneurs.

Advice for other women? “Don’t doubt yourself,” she says. “You can do it.”

Saidi grew up in Tehran, Iran but left in the late 1970s as religious revolutionaries began to seize control. She landed in Raleigh, following her older brother, who had studied at N.C. State University. After graduating from Cardinal Gibbons High School, she earned agricultural and civil engineering degrees at N.C. State in 1985 and 1993, respectively.

Saidi worked on highway design and traffic engineering at the N.C. Department of Transportation for more than a decade. She then struck out on her own, which wasn’t unusual coming from an Iranian culture that respected strong professional women, she says.

Starting from an unused room of her home, she worked to find common ground in her male-dominated profession. Benefiting from experience and contacts developed at the DOT, her business has become a major success story. Many company contracts involve public work, which buoyed it during slack periods such as the 2007-09 recession and when the pandemic caused cancellations and delays, says Jennifer Allen, Sepi’s senior vice president and strategy officer.

“We have a good combination of college and university, city and county, and N.C. DOT work,” Allen says. “We’ve been impacted for sure, but we’ve fared pretty well and will continue to grow.”

Sepi has offices in Raleigh, Charlotte, Wilmington, Beaufort and Charleston, S.C., and Fort Lauderdale and Palmetto, Fla. A new Asheville office is opening.

Along the way, Saidi has garnered awards that include membership in the N.C. Business Hall of Fame. She is chair of the N.C. Chamber, serves on the Raleigh-Durham Airport Authority and has been on the N.C. Banking Commission.

She still practices the stereotype busting that characterizes her early days as an engineer. “If there’s one thing I’d ask women,” she says, “it’s to have much more empathy for each other.”