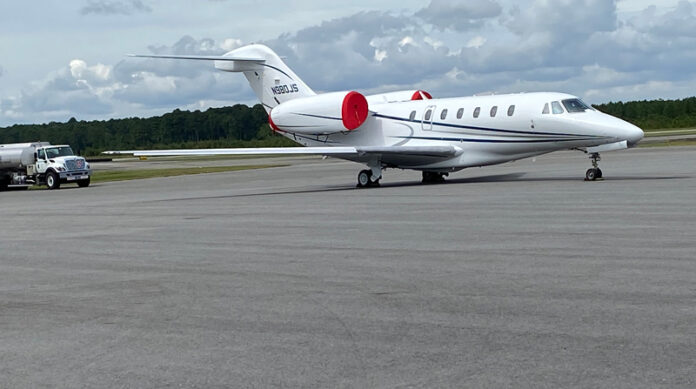 Earlier this month, I visited flyExclusive, a Kinston charter jet company that sits in a cluster of buildings beside the runway at the North Carolina Global TransPark.

On Sept. 1, there was a ribbon-cutting for the company’s new paint facility, and I missed that, but I talked with founder Jim Segrave a couple weeks later by phone. And since I was going to be driving by Kinston a few days after that, I decided to drop by.

This is Segrave’s second charter jet company in Kinston.  The first one was bought in 2010 by the private jet arm of Delta Air Lines. He waited for the noncompete to expire, and then, around 6 ½  years ago, Segrave started flyExclusive.  It is a bigger operation, with 85 jets spread across the country.

“We’ve gone from zero to the No. 5 largest private jet company in America,” says Segrave.

And it is getting bigger. By the first quarter of next year, Segrave expects to have more than 100 jets.  Right now, flyExclusive has 550 employees; before the end of the year, that will likely grow to 625.  Around half his employees are pilots.

Revenue in 2020, a year in which the pandemic reduced operations for several months, was about $138 million. Like many companies, Segraves’ businesses tapped Payroll Protection Program loans.  He says revenue will top $240 million this year, and may hit $350 million in 2022. Except for the first year, “we’ve never lost money.”

The 37,000-square-foot high-tech paint building actually opened in the spring. The electrostatic process bonds paint to the jets, reducing waste. “It wraps it around and sucks the paint to it,” is how Segrave explains it. A down-draft system draws dust away from the planes to project the paint job.

Jets need to get repainted periodically because, obviously, they sit out on runways in all kinds of weather and sun. They fly 500 miles an hour.  Jet charter companies want their planes to look good. And it can take four weeks to prepare and paint one of these jets so that the coating lasts about five years. Much of the work is stripping old paint and sanding surfaces, and covering up things like windows and leading edges you don’t want to paint. “We call ourselves painters,” says Sean Callahan, who runs the paint operation, “but painting’s about 3% of what we do.  Ninety seven percent is all prep.” Anyone who has painted a room knows about prep work.

Segrave is also building a 48,000-square-foot building to house all of his maintenance and interior refurbishing work, a project that should be completed in the first quarter of next year.  “Just the interior shop will have as many as 100 employees,” he says. “By the time you put paint, interior, mechanics, it’s 200 employees.”

The plan is to vertically integrate his business so he can do all of the painting, maintenance and interior work in-house in Kinston, rather than at vendors around the country. Segrave can then control the schedule, quality and costs, and also provide the services to other charter jet companies.

“So it’s not that I’m spending any more money. This is technicians and people that we are bringing to North Carolina, that are doing the work all over the country right now.”

A tour of flyExclusive would be a great middle school field trip, if your goal is to show kids good-paying aviation industry careers they can get if they stick it out through community college.  The clincher would be flyExclusive’s new air operations center, where folks are coordinating the movement of planes in real time. The display fills up a giant wall in front of the director of flight control, who is quarterbacking the operation. It is pretty awesome, speaking as a former middle schooler. Brad Blettner, flyExclusive’s chief revenue office, says “We call this the Wonder Wall.”

If you fly commercial, $200-$300 gets you on one of the scheduled Southwest flights from Raleigh-Durham International to Los Angeles. It may take you up to 11 hours, depending on where in America you have to wait for connecting flights and whether it’s a one or two-stop. So it’s cheap, but that can take up your whole day.

It’s the “high net-worth” people who can afford to fly in one of Segrave’s jets. Basically, flyExclusive is an airline with a schedule that is changing by the minute depending on the whims of its customers.

“We’re taking flights at the last minute and optimizing them,” says Segrave. “Today, we’ll sell a bunch of flights that we didn’t know about yesterday. It’s going to destinations that you had no plans to go to until the flight booked within minutes.  It’s pretty crazy.”

If you are in New York, and you need to get to Los Angeles quickly to close a billion-dollar deal, paying $35,000 to flyExclusive one way isn’t a big cost.  And if you are a highly compensated CEO, your time is valuable and sitting at an airport Chick-fil-A isn’t the best use of it. But it’s not just business travel. Wealthy folks have second homes. Celebrities like privacy. And the pandemic has made sharing space with strangers dicey.

“There’s pretty much not a single place in the entire country we can’t touch inside of about an hour,” says Segrave. “So if a customer calls me from North Dakota, I can get an airplane to him in about an hour.”

His planes are mostly Cessna Citations. The workhorse of the fleet, the Excel/XLS,  seats eight. His planes fly around 4,000 hours a month, but he sees that growing to almost 6,000 hours in 2022.

A significant chunk of his business comes from overflow from the biggest private jet companies, such as NetJets and Wheels Up.  They can’t handle all the business they are getting.  “We fly tons of flights for all of them.”

The private aviation market is poised for continued growth, according to some forecasts. Wheels Up, the first private aviation company to go public, cited estimates in its prospectus that only 10% of people able to fly charters  — individuals worth at least  $10 million —  were doing so.

The industry is ripe for consolidation.  The top 10 operators in the country control only 8% of the industry’s capacity. More than 1,800 operators control fewer than 10 aircraft each.  One of these was Sky Night, a Tennessee-based company flying several Gulfstream IVs that Segrave acquired last year, giving him bigger jets with international reach.

The private aviation industry needs to keep up with advances in technology. The Wheels Up prospectus noted that the digital innovations that enabled Airbnb and Uber aren’t widely available in the charter market.  “For much of the private aviation market today, the process of discovering and booking a private flight remains complex, time consuming, opaque and primarily offline. We believe this leaves consumers dissatisfied and inhibits demand,” it said.

This is the context in which flyExclusive has decided to set up a technology team in Durham, which is the kind of thing that state economic development folks like to see — high-growth companies in rural areas tapping into the abundant IT knowledge in our urban centers.

A chartered jet business can be headquartered in many places. flyExclusive has Kinston roots. Segrave is part of the Harvey family that has been operating businesses in Eastern North Carolina for 150 years.  His great-uncle, C. Felix Harvey III, was one of the founders of Global TransPark. The highway that now links the TransPark to Highway 70 is named for Harvey. Segrave himself is a member of the East Carolina University Board of Trustees.

But sentiment only goes so far. “Being based at the North Carolina Global TransPark, our landlord —  which is the State of North Carolina — is an incredibly good partner, advocate for our growth.  It’s great facilities, they’re super supportive of our growth, they’re helpful in any way they can.” The state and the TransPark foundation have provided grants and loans to help pay for expansions over the years.

“These facilities,” he said, “they’re super expensive.  The paint facility was approaching $12 milion.  The 48,000-square-foot one I’m doing – the shell and hanger – is a $6 ½ million project. The parking lot and the ramp going up to it are $2 ½ million.  So it’s incredibly capital intensive to grow, and being in a place that lets you do that in the most efficient way is incredibly important.”

“If you went to New York, you wouldn’t have the space to be as big as we are, and have the hangers, and if you did, they’d be outrageously expensive.”